I’ve been on quite a few food tours from chocolaty Chicago to Spain’s tapas and Venice’s cicchetti to Montreal’s international foodie scene. I LOVE food tours! They are a great way to discover a city and really connect with the culture of it. So when I heard about Eating London Food Tours, I was just dying to go. After all, I really didn’t know much about British food other than the staples like fish and chips, pies, and that people generally say it is bland. Oh how much I learned in just three and a half hours with Nicole, our Eating London guide. 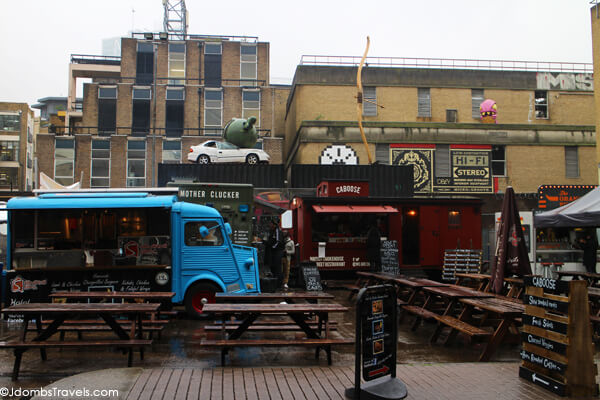 Nicole is actually Australian but now calls Spitalfields in London’s East End home. The East End Food Tour was Eating Europe’s very first tour and only about three months old when we went on it, but Nicole spent three months researching (otherwise known as eating her way through) her East End neighborhood to find not only the best dishes, but establishments full of history and that truly tell the story of the cultural melting pot that is now Spitalfields. 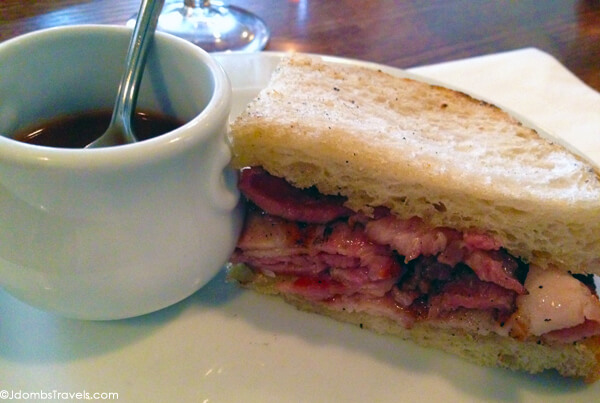 We met Nicole on a rainy morning at the Spitalfields Market where she enthusiastically told us we’d be visiting eight stops over the next few hours. “Hope you’re all hungry!”, she exclaimed with a huge smile to our small group.

As she led us to our first stop, St. John Bread and Wine, Nicole told us we’d be trying their bacon sandwich. While the menu at St John Bread and Wine changes daily, their famous bacon sandwich is a daily staple. “The bacon comes from the nicest pig butts in all of England,” Nicole said with a wink. The bacon is soaked in brine for two weeks and the bread is char-grilled. They even have a ketchup sauce with a secret ingredient that no one in our group could guess. Whatever the secret ingredient, something as simple as bacon and ketchup on bread never tasted so good. 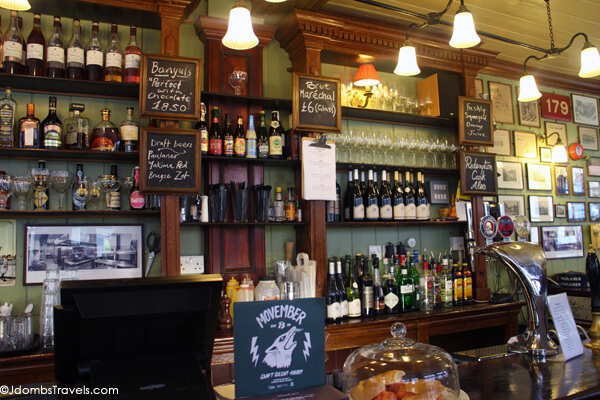 Inside The English Restaurant

Just around the corner, we shook out our umbrellas and stepped into The English Restaurant, which is the oldest house in Spitalfields dating from the 16th century. The building itself has quite an interesting history: Roman ruins were found on this site, it was once a Jewish bakery, and today it is home to salvaged oak pews from the Christchurch Spitalfields. I gobbled up a tasty banana bread pudding with a warm custard sauce and wandered around the quaint old house.

Our stomachs got a bit of a break as we walked off the first two courses and saw the spots where Jack the Ripper carried out his horrors, the Jewish Soup Kitchen that closed as recently as 1992, and some famous movie locations. 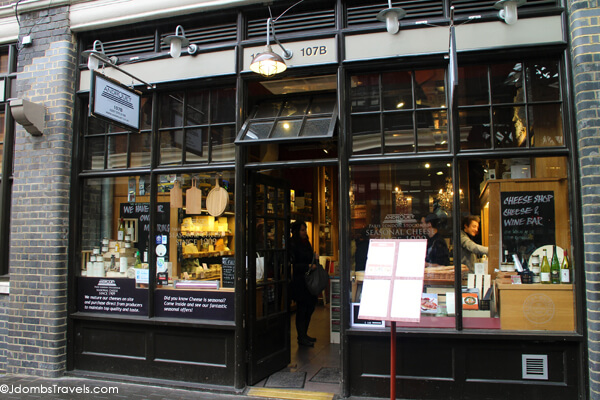 Androuet at the edge of Spitalfields Market 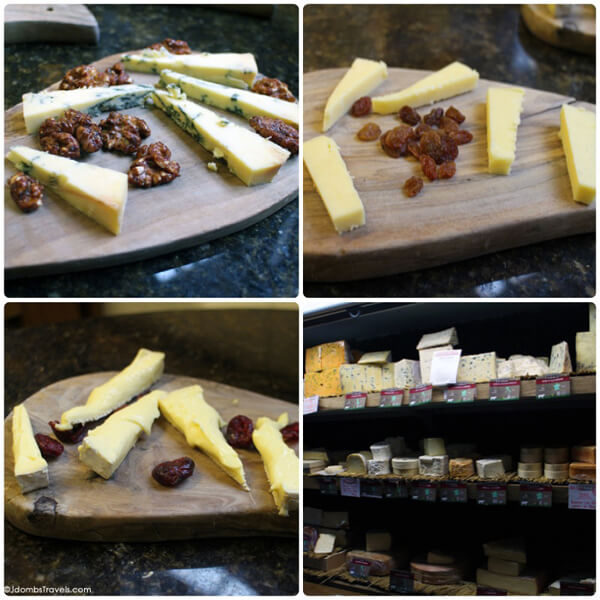 Back to eating, we found ourselves at the cheese shop Androuet. I was surprised to learn that cheddar is English! Legend has it that cheddar was discovered when a milkmaid stored a pail of mail in the Cheddar Gorge caves in Somerset, England. She later returned to find the tasty cheese and called it cheddar. We tried three kinds of cheese, a white cheddar, of course, a creamy cheese called Waterloo, and Stilton which is an English blue known as the king of the cheese. 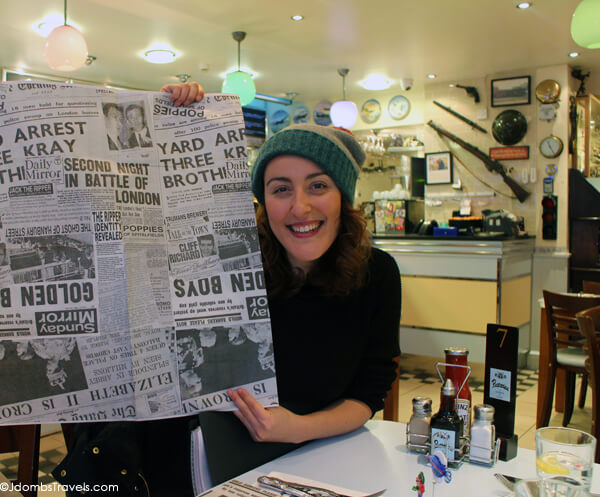 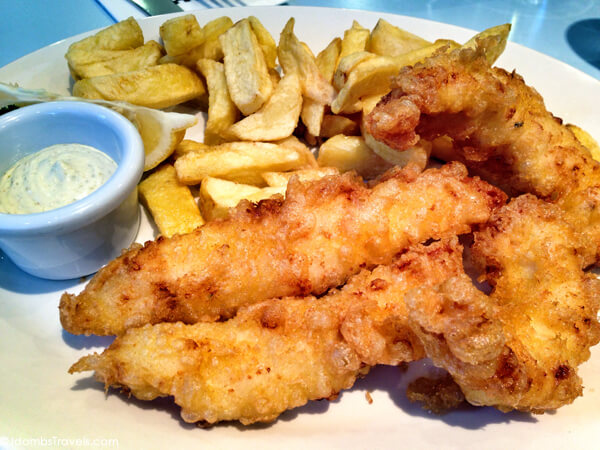 Just about lunchtime, it was time for the world’s greatest double act. The deep fried fish actually comes from Ireland and the chips from Belgium, but the two together became popular in the 1900s in England. Poppy  has been making fish and chips since he was 11 and his shop has been open since 1945, so it’s no surprise that Time Out named Poppies the best fish and chips in London. What was a surprise was stepping from the streets of London into what felt like 1950s America. With sailor girl uniforms, a jukebox, and an impressive collection of 1950s memorabilia, Poppies has a fun vibe. Beyond that, the fish and chips are awesome! The fish is all caught sustainably and Poppy himself was there making sure everything was just right. 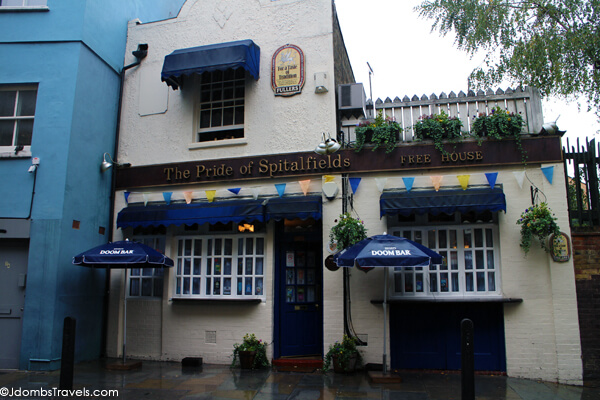 The Pride of Spitalfields has a famous resident cat named Lenny!

What do you need to wash down fish and chips? A tall glass of beer or a cider! Nicole led us to her local pub, The Pride of Spitalfield for a Truman ale. I’m not a fan of beer, so I passed on a refill. But when it came time for refills on the Orchard Cornish Cider, which is 90% fermented apple juice and won the Best British Cider awards of 2012, I was the first to hold up my glass. 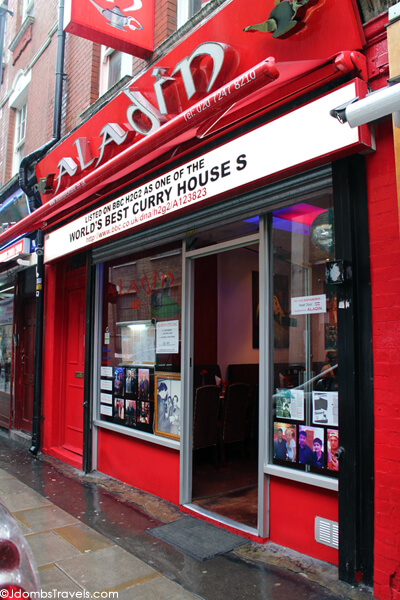 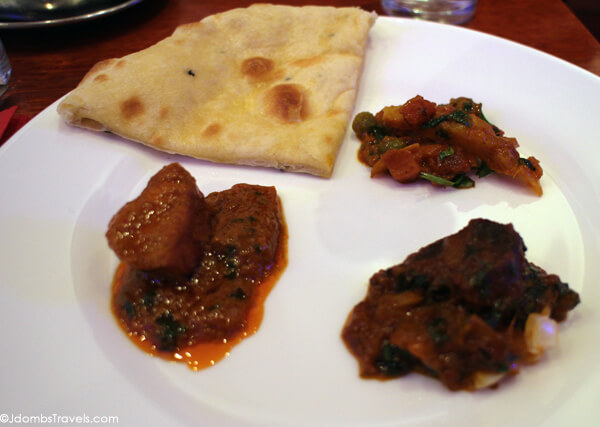 A trio of curries and naan bread

“Do you know the national dish of Britain?”, Nicole asked as we headed to our next stop. With more than 10,000 fish and chips restaurants I naturally guessed fish and chips. Nope! And it’s not Yorkshire pudding or bangers and mash either. It’s…curry?! The 15,000 curry houses kick the 10,000 fish and chips shops ass and curry is indeed the national dish. With so many curry houses to choose from and more than 50 just on Brick Lane alone, how do you know which to eat at? Well, Prince Charles dines at Aladin and if it is good enough for The Royals, it was good enough for us! We tried three curry dishes: vegetable bhuna, lamb pathia, and chicken madras with the lamb being my favorite. 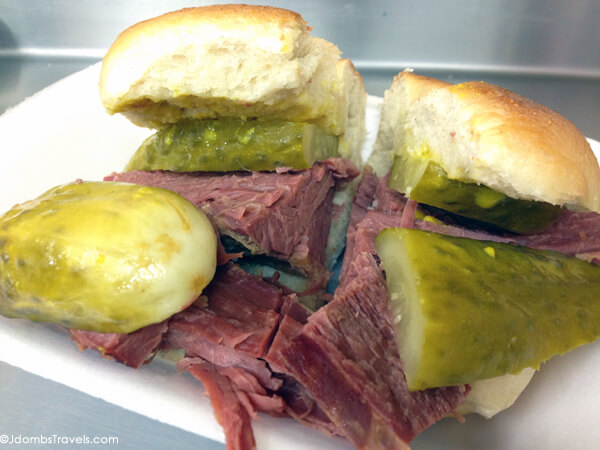 We wandered past the vintage shops and by street art to our next stop, Beigel Bake, for their hot salt beef bagel. Hot salt beef is like the American corned beef and when served on a homemade bagel with spicy mustard and pickles, it is delicious! The beef melts in your mouth. It’s a good thing I don’t like anywhere near Spitalfields, because Beigel Bake is open 24 hours a day and they produce around 3,000 bagels every day. 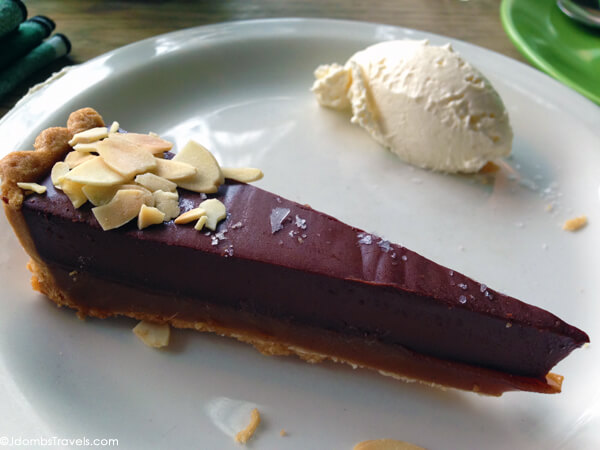 Our tour ended at Pizza East, located in the Tea Building. It was formerly a biscuit factory and tea warehouse. Today, it’s where the chic residents of the East End head for delicious pizza. But we weren’t trying the pizza. Instead, we finished off our Eating London Food Tour with a salted caramel chocolate torte with a side of homemade whipped cream and a hot cup of English breakfast tea.

While every single thing we tasted was delicious, what made this the best food tour I’ve ever been on was Nicole’s enthusiasm and knowledge. She clearly researched the history of Spitalfields and not only was my belly full of tasty treats, I had learned a lot about the history of the East End.

Our East End Food Tour in order to bring you this story. However, Luxe Adventure Traveler maintains full editorial control of the content published on this site. This article contains affiliate links. When you book on Booking.com or Eating London Food Tours or shop on Amazon