You are here: Home / Europe / Iceland / Not Your Average Golden Circle Tour: Super Jeep and Snowmobiling Having traveled around Iceland independently multiple times, including circumnavigating Iceland’s famous Ring Road twice, we’re the biggest advocates there are for just hopping in a rental car or camper van. But there’s some things in the land of fire and ice that can only be seen on Iceland tours, like Langjökull glacier. That’s why we love this Golden Circle tour that combines some of Iceland’s most popular sights with a snowmobile adventure on Iceland’s second largest icecap. 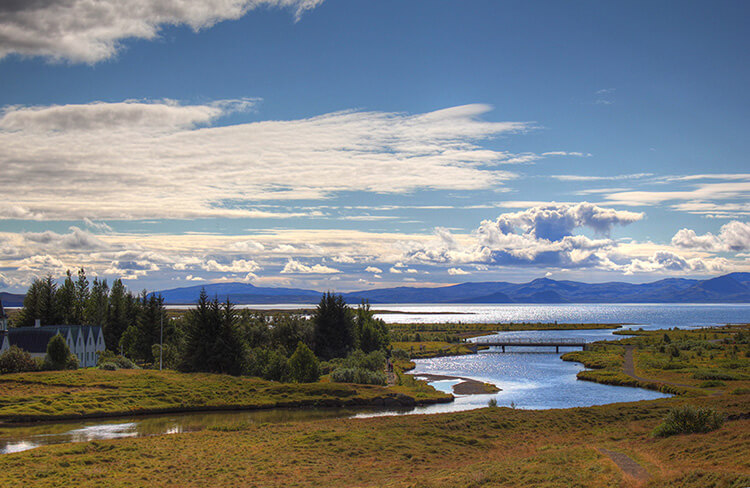 The Golden Circle is a handful of attractions all within 100 kilometers of Iceland’s capital, primarily Thingvellir National Park, the geysers at Haukadalur geothermal area and Gullfoss waterfall. While each of these attractions are free to enter and all roadside attractions easily accessible, some people just prefer to kickback and visit them on guided Golden Circle tours.

Thingvellir National Park is often the very first stop on an Iceland Golden Circle tour, and with good reason. The roots of Iceland’s entire history – both its natural formation and the birthplace of democracy – are deeply tied to Thingvellir.

Aptly named Thingvellir (Þingvellir in Icelandic), which means “the fields of parliament,” the thirty or so various clans that had landed on Iceland around the year 800 grew tired of the demands of the High King of Norway. They banded together to create their own government and each of the clan groups sent a representative to the meeting. The Alþingi, the world’s oldest parliamentary democracy, was established at Thingvellir in 930.

And in nearly 2000 years of history , the Alþingi met at Thingvellir every year for the same purpose of discussing government issues at Thingvellir. There’s only been one interuption in the process in Iceland’s history, and the was from 1799 to 1844. After, the Alþingi officially moved to Reykjavik, where they continue to meet today. 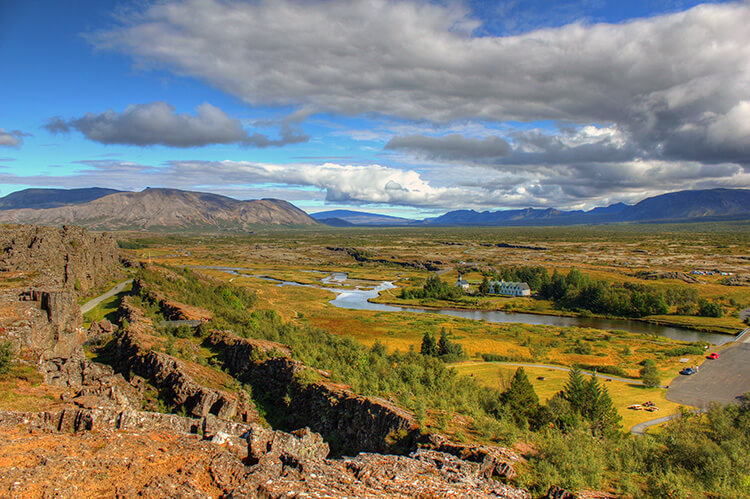 Of course, without the volcanic eruptions in the Mid-Atlantic Ridge that formed Iceland about 24 million years ago, the Althingi wouldn’t have had this spot to meet to begin with. And that’s the other special thing about Thingvellir – it’s the one of the only two places in the world where the Mid-Atlantic Ridge can be seen above sea level. The other place, also in Iceland, is Leif the Lucky’s Bridge Between the Continents and it’s a mere hour away on the Reykjanes Peninsula.

The plates of North America and Eurasia were formed when the supercontinent of Laurasia separated and a magma chamber further forced apart their separation, forming Iceland.

Looking across the viewpoint over Thingvellir, you can see the Eurasian continent. Lava fields covered in moss fill the landscape between the two continental plates. It’s been more than 2000 years since the last eruption here, and we see the new life that thrives like the native birch trees and the pines that have been imported. 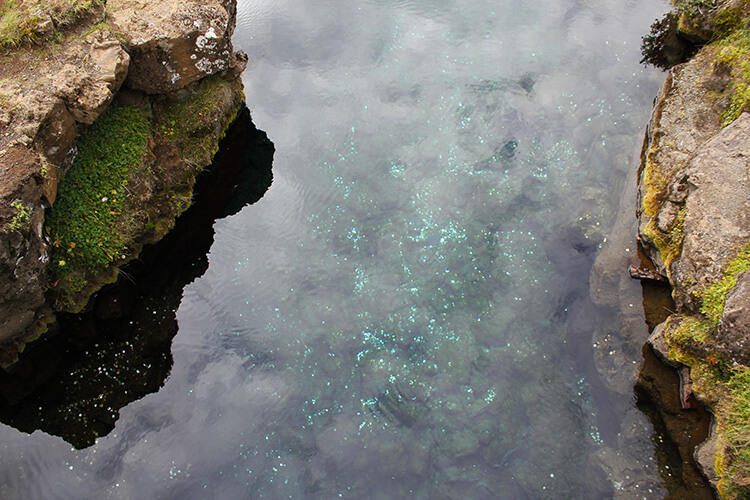 The ravines created by earthquakes, that regularly occur in Thingvellir National Park, fill with the fresh water that melts and runs off Langjokull Glacier. The lava rocks are porous and act like a filtration system, so the water is completely void of any sentiment. The whole ecosystem makes the water some of the clearest on the planet. 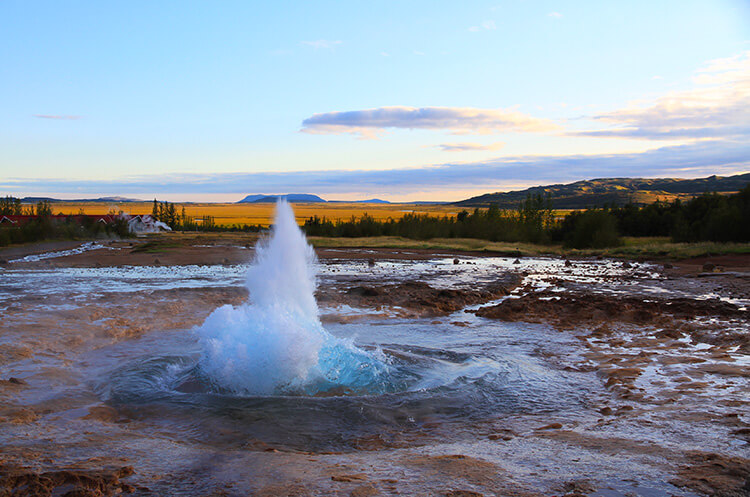 Though there hasn’t been an eruption at Thingvellir in more than 2000 years, just an hour away we can see the volcanic activity beneath Iceland bubbling away. Quite literally.

At the Geysir Geothermal Area at Haukadalur, the ground is a hot bed of bubbling mud pots, stinking sulfurous pools and steam vents. You can just about set your watch to Strokkur, named for the water that suddenly starts churning and blasts in to the sky every six minutes or so.

This is one of Mother Nature’s astounding natural phenomena and Strokkur is one of Earth’s most reliable and accessible. 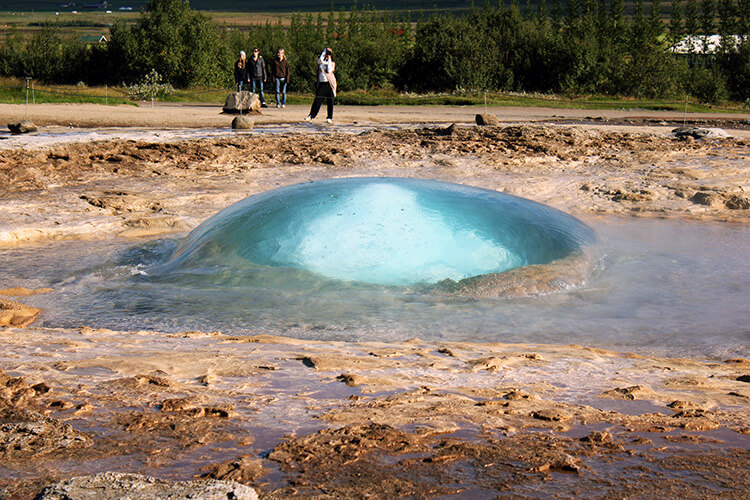 Strokkur erupts every six minutes or so

A blue bubble forms briefly after the water is sucked in. A foamy whirlpool churning just beneath the bubble’s surface gives the geyser its name, which translates to “The Churn.” 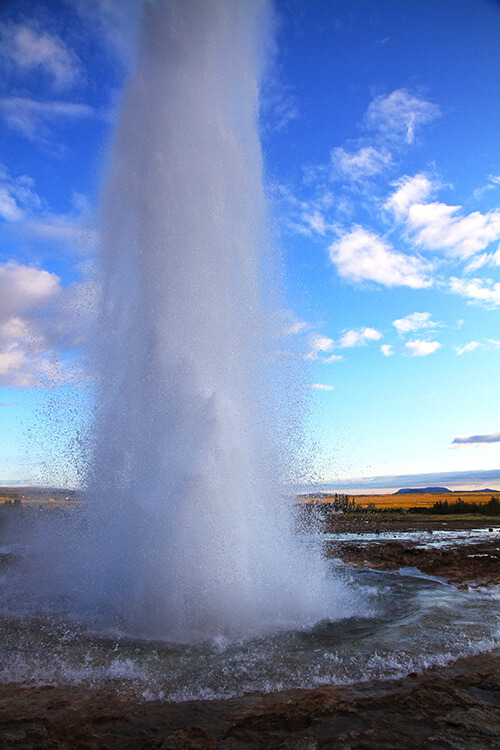 And then with powerful force, the water explodes toward the sky with a bang. The oohs and ahhs have barely subsided when the whole process starts again, and the suddenly gurgling pool is an indication the earth is about to show its inner force. 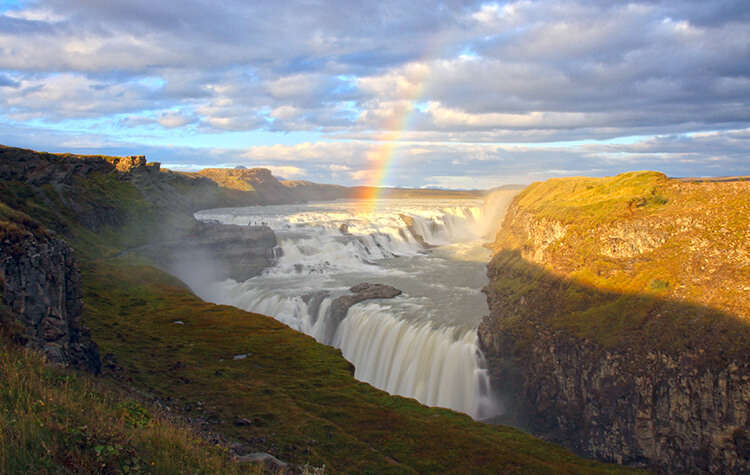 Melt water from Langjökull glacier runs in to the Hvíta River, which is the best river for white water rafting in Iceland. So you can imagine that the water flowing down the Hvíta River is fast and powerful.

You can get up close with that power sans the raft at Gullfoss, one of Iceland’s most popular waterfalls…and certainly Iceland’s most iconic. It’s a mere 10 minutes down the road from Geysir and easily accessible with a path that will deliver you right down to the falls.

The Hvíta rushes over a double a double fall, plunging down in to a canyon carved through the ancient valley. And rainbows often appear here from the spray coming off the powerful double-cascade.

But this magnificent sight almost wasn’t. Back in the time when it was privately owned, an Englishman proposed to buy it and turn it in to a hydro-power plant. Luckily, the owner’s daughter drew attention to what a natural loss the hydro-power plant would have been ,and the Icelandic people saw to that construction never began.

In 1979 the Icelandic government designated Gullfoss a nature reserve, and we’re left to enjoy the beauty of it today. 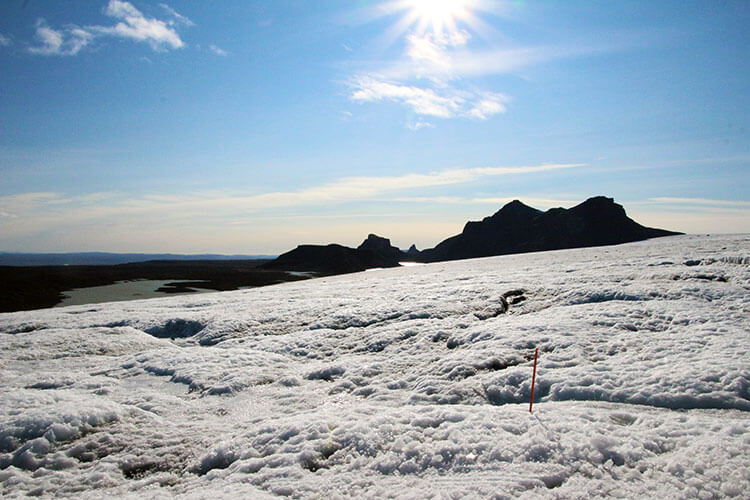 It’s a different world on top of Langjökull

Both Iceland and Europe’s second largest glacier, Langjökull is intricately tied to all three of the Golden Circle’s major attractions. So it’s only fitting to finish a day exploring the Golden Circle by snowmobiling on the very glacier that feeds Þingvallavatn Lake, the Hvíta River and the Geysir geothermal area.

Though the ice of Langjökull is 580 meters (nearly 2000 feet) thick, glaciers can be dangerous places with their cracks and moulins. That’s why you should never attempt to visit one without a knowledgeable guide.

The adventure up to Langjökull starts at Gullfoss, when you can really appreciate the abilities of the super jeep on the ride up to the highlands. At the base camp, you get all suited up in a helmet and warm suit. Then it’s just another short, but bumpy adventure as the super jeeps leave the rough road behind and pick their way across the base of the glacier. 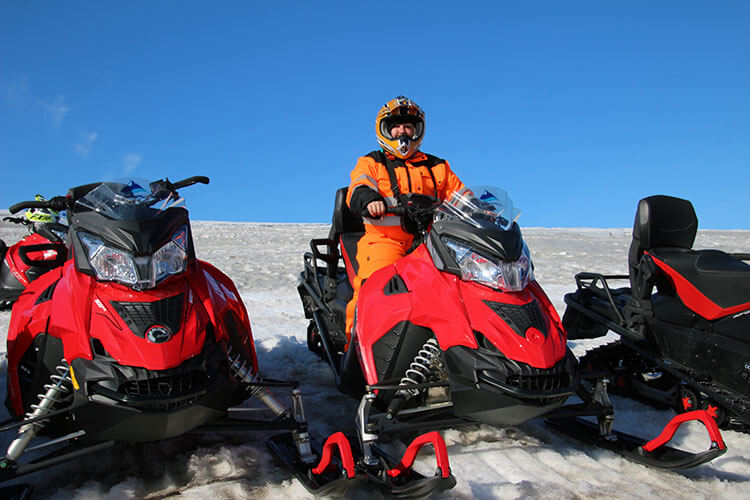 All smiles after riding up to 1000 meters on Langjökull

This Iceland snowmobiling tour on Langjökull is a beautiful experience. The highest point of Langjökull is 1450 meters, and the guides aim to get the group up to 1000 meters. From here, you’ve got a 360° view of mighty series of mountains rising all around the glacier.

Cross your fingers you’re blessed with a clear day, because the views to the surrounding mountains and the glacial lake Hvitarvatn are other worldly. The one-hour snowmobile tour on Langjökull truly is an unforgettable end to a day of the take-your-breath-away sights that make Iceland a unique destination.

BookingWhere To Stay
Book the Golden Circle Super Jeep and Snowmobiling tour online. This tour isn’t suitable for kids younger than 8 years of age.
We recommend Túngata 32 or Hilton Reykjavik Nordica in Reykjavik or Hotel Berg or Northern Lights Inn in Keflavik.

This article contains affiliate links. When you shop on Amazon