You are here: Home / Europe / France / A Foodie Getaway at Bordeaux’s Smallest Winery

Bordeaux is synonymous with the finest wines in the world, but it’s a city that is also fast becoming a haven of culinary delights. With star chefs like Gordon Ramsay, who opened his second Bordeaux restaurant earlier this year, and an influx of young, innovative chefs, the restaurant scene has come to life. It wasn’t always that way, though. I seemed to have moved to Bordeaux at just the right time when the Port of the Moon is becoming a culinary powerhouse in France. And I honestly couldn’t be more pleased to regularly receive invitations to dine in the best that Bordeaux has to offer. It’s a tough job, but someone has to do it and so off I went to the Le Saint-James Bordeaux. 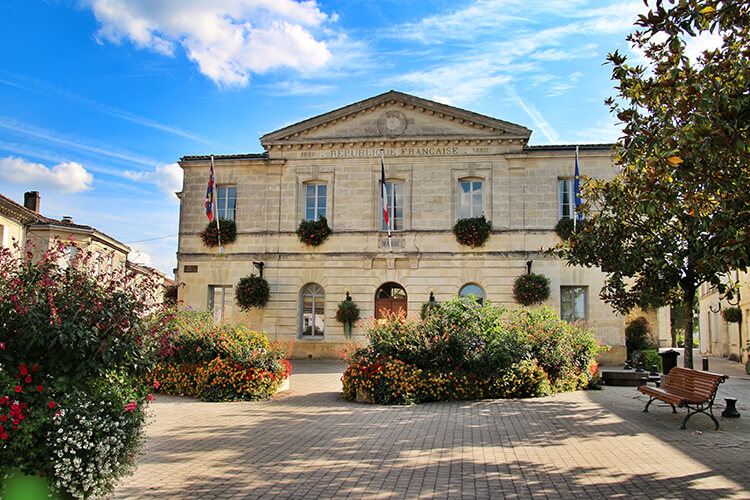 The charming center of Bouliac

Le Saint-James Bordeaux is located in the quaint little village of Bouliac. Though it’s just a 15-minute drive outside of Bordeaux, and also easily reached on public transportation, I hadn’t yet ventured to Bouliac.

I immediately saw why this village is called the “Balcony of Bordeaux”. Situated on the right bank of the Garonne, Bouliac looks over the river and Bordeaux’s unmistakable monuments like the spire of Saint-Michel. There’s just no other way to describe the view but as absolutely breathtaking. 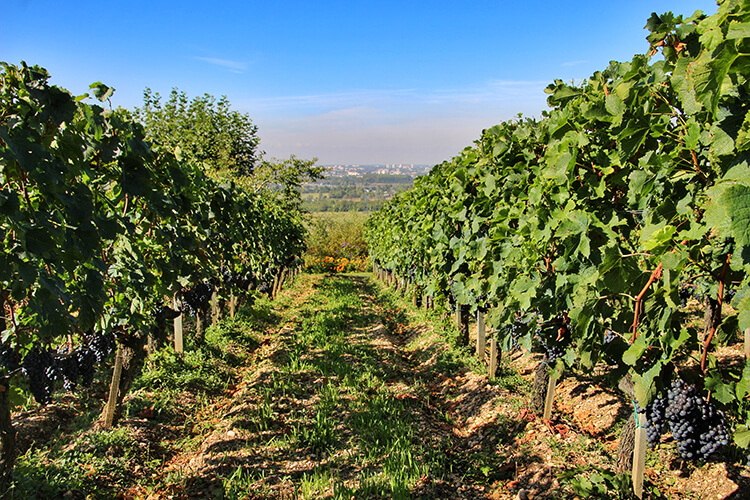 Merlot grapes just about ready for harvest at Le Saint-James

Le Saint-James isn’t just a luxury hotel, it’s also Bordeaux smallest vineyard. Technically speaking, the vineyard at Bordeaux-Merignac Airport is the smallest but they don’t harvest and make wine from their grapes. Le Saint-James does and I got to look at their on property winery.

Merlot grapes are grown at Le Saint-James and, depending on the harvest yield, between 400 and 600 bottles of Bordeaux wine are produced for each vintage. The guests are invited to take part in the harvest, and in such a small vineyard it takes just a few hours to harvest the whole lot.

I was supposed to return to take part in Le Saint-James’ harvest on October 1, but we found out our dog had cancer only a few days before and would be undergoing a major surgery the next week. I opted to miss the harvest and barbecue party to stay home and spend time with her, as we were anticipating an ominous outcome. The harvest will happen again next year… 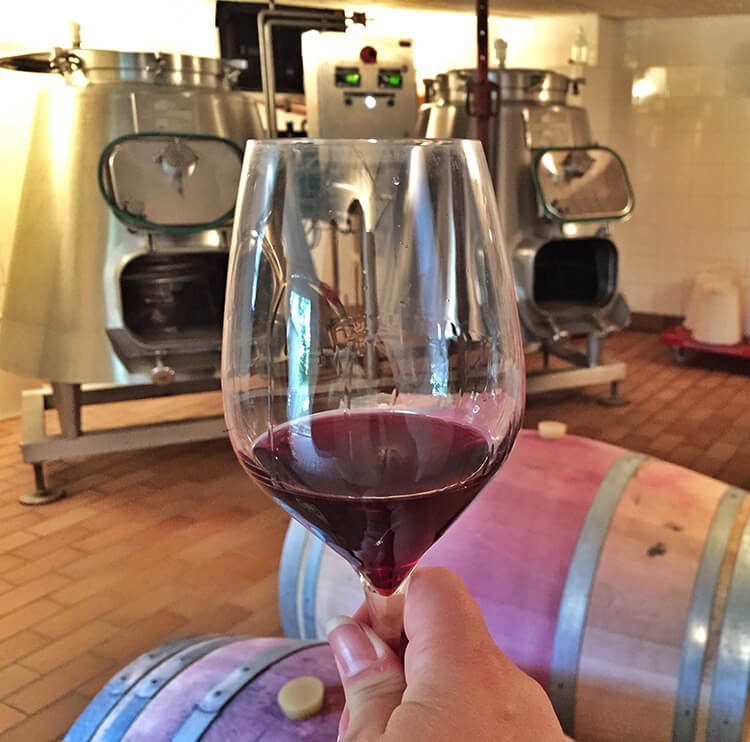 Tasting wine in the smallest winery in the Bordeaux

The grapes are all sorted, crushed and finally go in to Le Saint-James tanks. There are just two and that’s all that is needed to produce the exclusive bottles of Le Saint-James Bordeaux wine.

When we first walked in to the winery, I immediately saw the single oak barrel. Running through my mind was that it must be a very special barrel. No, this barrel is Le Saint-James only barrel! The production is so small and exclusive, just this one barrel and a smaller half barrel used to top up the angel share of wine that evaporates during the aging process are all that are needed.

The wine is bottled just before the next year’s harvest and aged further in the bottle, just as with other Bordeaux wines. I even got to try a glass of the recently bottled 2015 vintage, which was already quite good. 2015 was an excellent year and the quality of the wine was undeniable. I’d love to try this 2015 vintage again in four or five years when it’s really ready for drinking.

Bordeaux wines are best appreciated when paired with food, and so after touring the vineyard and winery I sat down to lunch at Le Saint-James gourmet restaurant. With Bordelaise Chef Nicholas Magie at the helm, the gourmet restaurant has 1 Michelin star and a reputation for an innovative spin on the local Bordelaise cuisine. 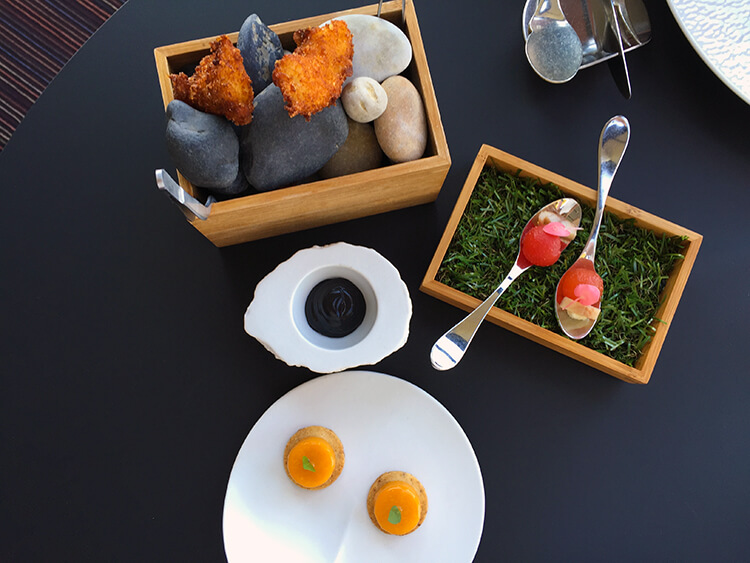 Creative presentation of the amuse-bouche

I loved the creative presentation of the amuse-bouche. Presented on several small plates that resembled a Japanese garden, there was a bright orange carrot and orange mousse on Parmesan shortbread, watermelon with smoked eel on spoons atop a bed of grass and fried monkfish served with squid ink mayonnaise set among a zen stone garden. 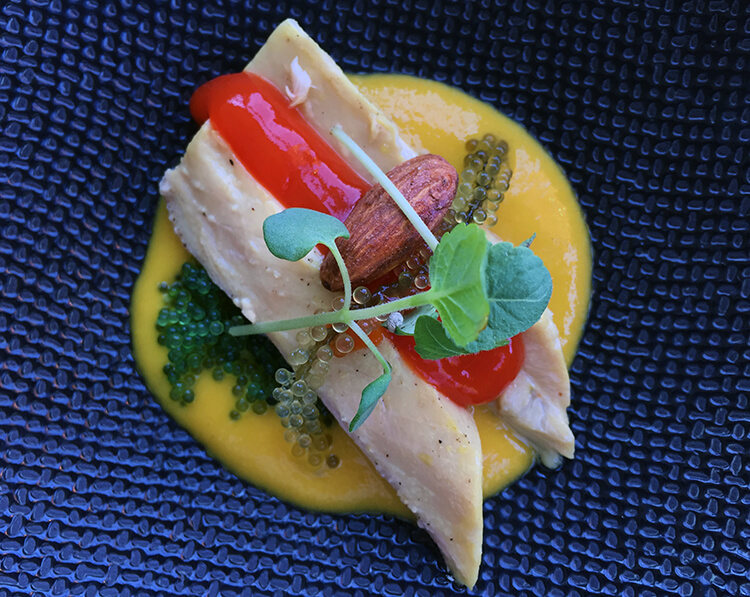 Mackerel with a smoked almond and two kinds of caviar

With Bordeaux’s position so close to the Atlantic Ocean, the freshest fish is available and Chef Magie showcased it with my tasting menu. Mackerel with two kinds of peppers, a smoked almond and two kinds of caviar followed. I think some molecular gastronomy was done to make the one kind of the caviar attached along an edible vine, making it resemble a bunch of grapes.

Boeuf de Bazas is a very special breed of cattle developed from the Aquitaine and Spanish cattle. To be certified as Boeuf de Bazas, the cattle must be raised in a very specific and free range way. The organic beef has a unique taste and is on par in France with the quality of Kobe or Wagyu beef. 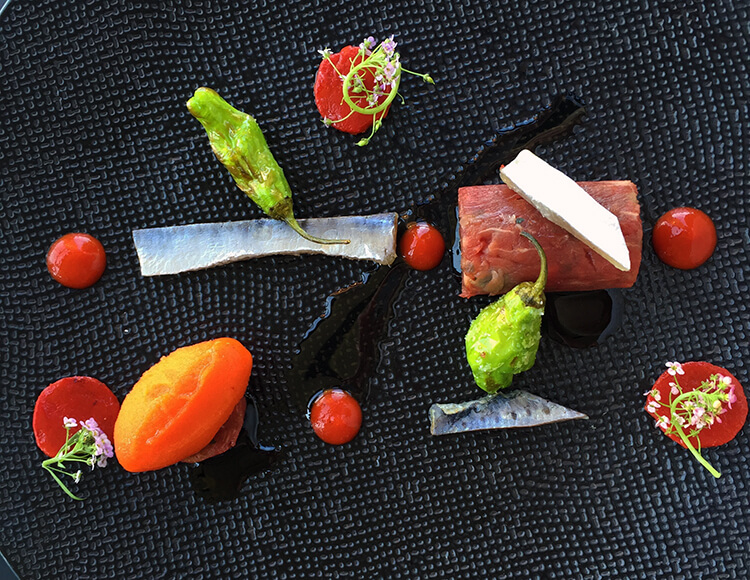 I tried my first Boeuf de Bazas as a lightly smoked tartare with marinated sardines and served with grilled shishito peppers, red pepper sorbet and drizzled with aged balsamic vinegar from Modena, Italy and olive oil. It was divine. 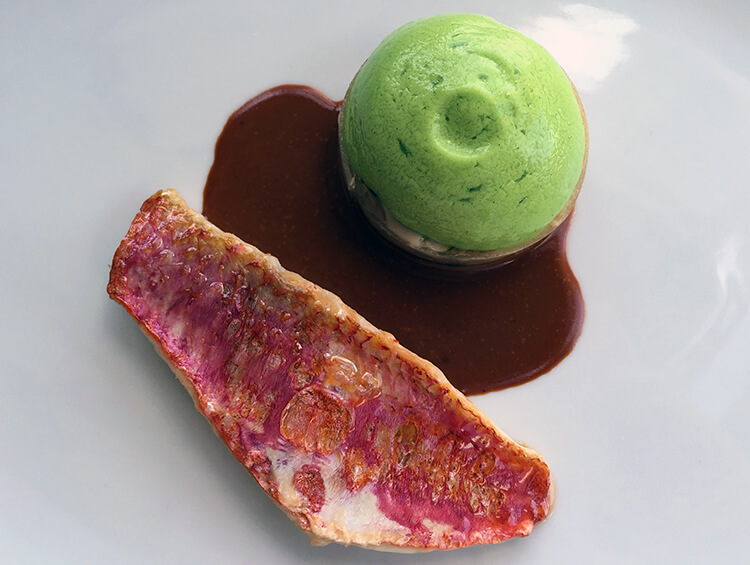 The only dish of my tasting menu that I didn’t really care for was the red mullet with lemon verbena and spider crab. I’m just very particular with the types of fish I eat and the red mullet was a little fishier tasting than I like. The roasted squash served alongside, however, was delicious. 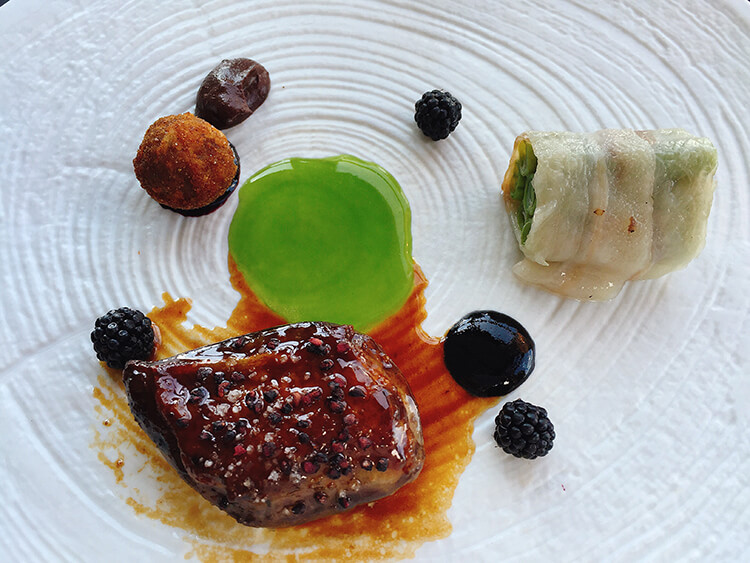 Surprisingly, my favorite dish was something that I probably wouldn’t have ordered had I been selecting a la carte. The pigeon breast in a blackberry glaze and served with blackberries and blackberry cream was just an incredible pairing. I had it paired with a glass of the 2009 Le Saint-James Bordeaux wine, exclusively served at the restaurant. 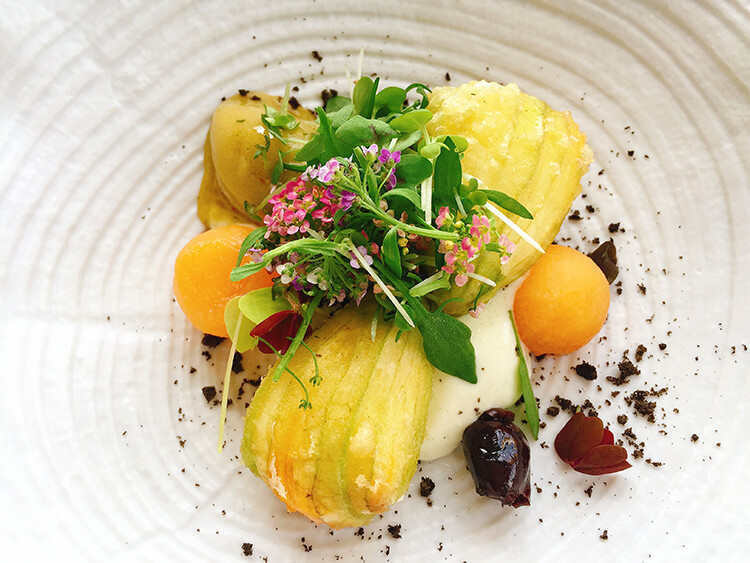 This is France, after all, so a cheese course followed. It’s never just any plate of cheese, but this one featured some of my favorite things: lightly fried zucchini flowers stuffed with chèvre and tarragon. There’s just something that tastes better about French melon and there were sweet balls of melon alongside, which perfectly complimented the slightly bittersweet tarragon sorbet. 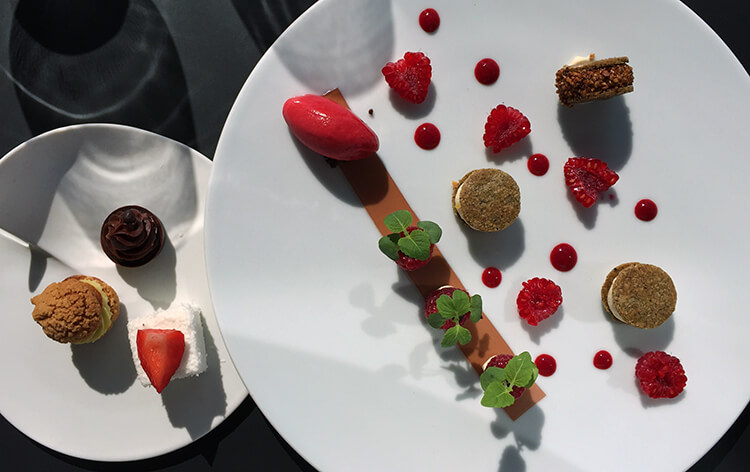 Diving in to the multiple dessert courses

There’s also just never one dessert course at a Michelin-starred restaurant, though these were perfect with the fresh raspberries making it feel a bit lighter. 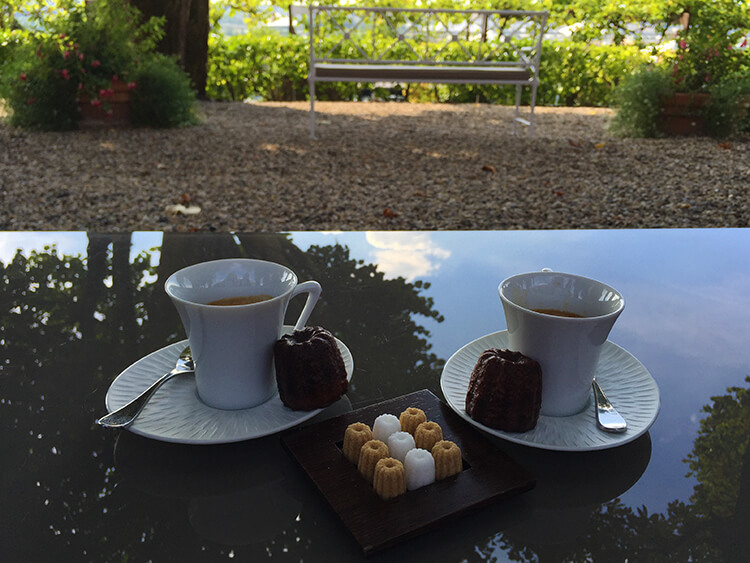 Coffee and canelés in the garden

Coffee and canelés, a crusty custard like pastry that hails from Bordeaux, finished off the meal. It was served in the garden to enjoy the last warm days before the Fall truly set it. 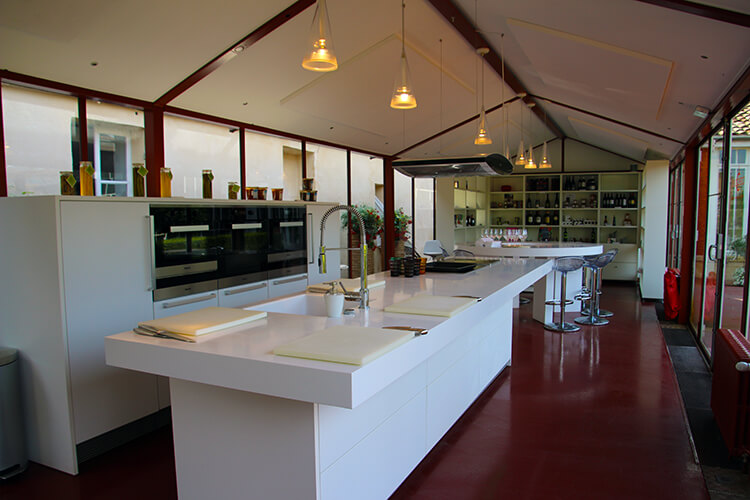 Le Saint-James offers a variety of cooking classes at their state-of-the-art Cooking School. While I didn’t take any classes on this particular visit, they are offered in English and I’m looking forward to returning to learn a few French cooking techniques.

I did peek in on a cooking class that was going on during my visit and everyone was having fun preparing dishes. Of course, the best part is when you get to enjoy the fruits of your labor after. 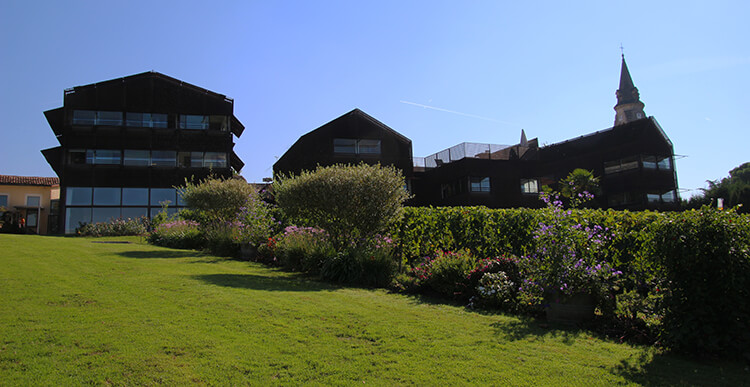 The hotel has been around since 1989. It was designed by the famous French architect Jean Nouvel, who designed the exterior after the tobacco drying barns of the Aquitaine region. 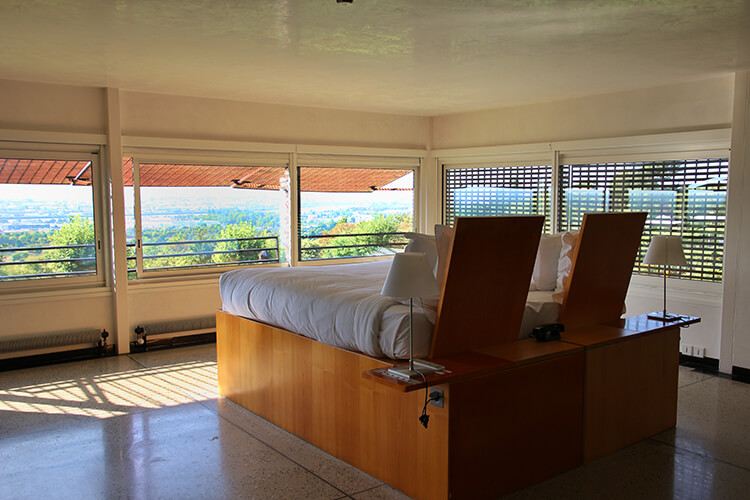 The 18 rooms and suites are a modern minimalist design. Not exactly cozy and making you never want to leave, the panoramic views of the vineyards and Bordeaux beyond do just the opposite – entice you out to experience the wonderful wine and culture in this heavenly little slice of France. 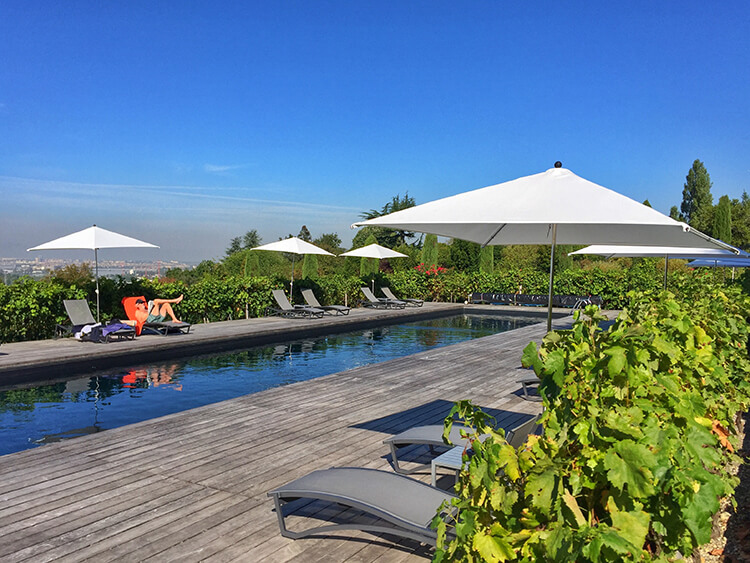 Who wouldn’t want to spend some time poolside?

As I’ve mentioned previously, a pool is a bit hard to come by in Bordeaux and the one at Le Saint-James is fabulous. Surrounded by the vines with the stunning view, I want to spend all my summer days there. The hotel also has both a permanent art collection and temporary exhibitions. The sculptures in the fruit orchard at the front of the hotel are now part of the permanent collection and quite interesting. Several reminded me a bit of the figures from Edvard Munch’s Scream paintings, which I quite like.

The original 1989 design by Nouvel has been maintained and I felt the rooms could use a little sprucing up. That noted, the view certainly cannot be beat. With the location just 15-minutes drive from Bordeaux or 45-minutes via public transportation, Bordeaux is at the hotel’s doorstep and an excellent alternative to staying right in the city.

Our visit was provided by Le Saint-James in order to bring you this story. However, Luxe Adventure Traveler maintains full editorial control of the content published on this site. As always, all thoughts, opinions, and enthusiasm for travel are entirely our own. This article contains affiliate links. When you book on Booking.com