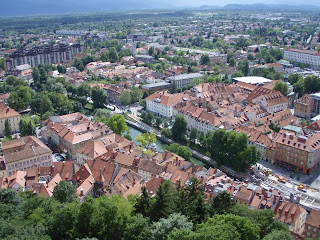 Ljubljana, the capital of Slovenia, has long been symbolized by a dragon, which symbolizes power, courage and greatness. The dragon is depicted on the top of the tower of the Ljubljana Castle, in the Ljubljana coat-of-arms and on the Dragon Bridge. There are several explanations on the origin of the Ljubljana Dragon. According to the celebrated Greek myth, the Argonauts on their return home after having taken the Golden Fleece found a large lake surrounded by a marsh between the present-day cities of Vrknika and Ljubljana. It is there that Jason struck down a monster. This monster has become the dragon that today is present on the city’s coat of arms and flag. 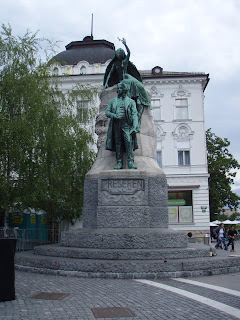 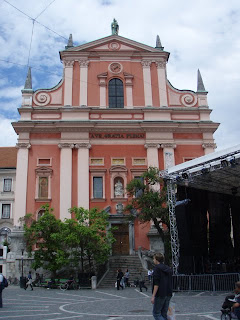 Ljubljana’s historic center remains intact and is a lovely mix of Baroque and Art Nouveau styles. After the 1511 earthquake, Ljubljana was rebuilt in a Baroque style and after the 1895 quake, which severely damaged the city, it was once again rebuilt, this time in an Art Nouveau style.Prešeren Square is the central square in Ljubljana. A statue of the Slovene national poet France Prešeren with a muse stands in the center of the square and faces the window where Prešeren’s “muse” used to live. The Baroque style Franciscan Church of the Annunciation stands on the north end of the square and was built between 1646 and 1660. Next to the church there is a Franciscan Monastery dating from the 13th century. The monastery is famous for its library, containing more than 70,000 books, including many incunabulae and Medieval manuscripts. On the south side, the Ljubljanica River passes under and is traversed by the city’s best-known bridge, Triple Bridge, designed in 1929 by Jože Plečnik. (A model of the Triple Bridge is displayed at Mini Europe.) 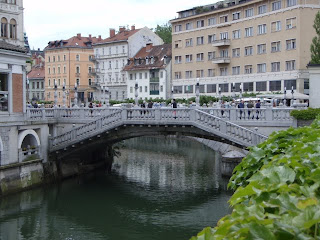 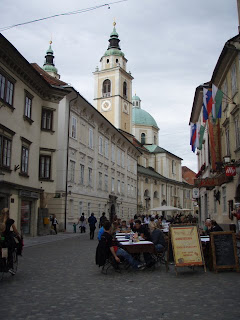 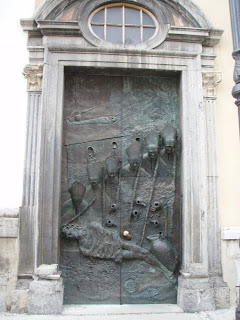 Continuing on, the Saint Nicholas’ Cathedral, built between 1701 and 1706, on Cyril and Methodius Square is easily recognizable by its green dome and twin towers. n the 20th century, several of the doors were altered on the church. Tone Demšar painted a historical depiction of Slovene history to commemorate 1250th anniversary of Christianity in Slovenia, and Mirsad Begić redesigned the side doors with portraits of bishops at the church. 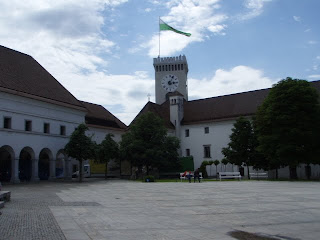 Dominating the hill over the Ljubljanica River, is the Ljubljana Castle. The castle can easily be reached by funicular railway; the entirely glass funicular car providing stunning panoramic views as you ascend to the castle. Built in the 12th century, the castle was a residence of the Margraves and later the Dukes of Carniola. The fortress was destroyed when the duchy became part of the Habsburg domains in 1335. Between 1485 and 1495, the present castle was built and furnished with towers for the purpose to defend the empire against Ottoman invasion as well as peasant revolt. The castle’s Outlook Tower dates to 1848; this was inhabited by a guard whose duty was to fire cannons warning the city in case of fire or announcing important visitors or events. Be sure to climb the tower for marvelous views over the city; in fair weather over a third of Slovenia can be seen.

In 1895, when an earthquake destroyed much of an old monastery containing a girl’s diocesan college and library, it had to be completely pulled down and Vodnik Square became an outdoor market now called the Ljubljana Central Market. The market quite literally has hundreds of stalls selling everything from fresh produce to clothing. 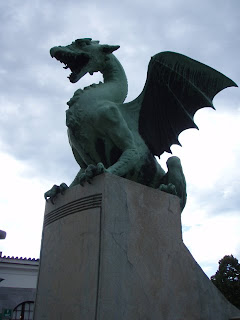 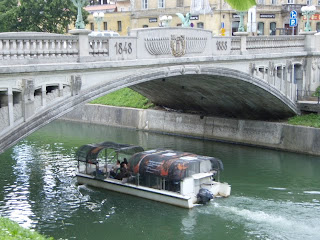 Vodnik Square is also the home to the famous Dragon Bridge. Originally named The Jubilee Bridge of the Emperor Franz Josef I, built to commemorate forty years of his rule from 1848–1888, it lost its official name after opening and was unofficially renamed to the Dragon Bridge because of the four dragon statues at its four corners. Dragon Bridge is often regarded as the most beautiful bridge produced by the Vienna Secession. There is a legend that Jason was the founder of Ljubljana, and he and his Argonauts killed a dragon. This is one of the four dragon statues on the bridge. According to local legends, when a virgin crosses the bridge, the dragons will wag their tails. 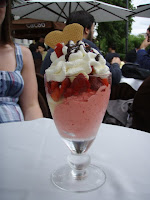 After crossing the Dragon Bridge, continue along the river back toward Prešeren Square. Be sure to stop at Cacao on Petkovškovo Nabrežje, famous for their desserts! The menu features no less than 50 ice-cream concoctions and ice-cream based cocktails. 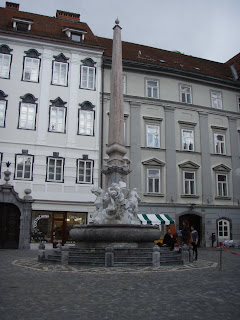 On Town Hall Square, the Robba Fountain stands in front of the Town Hall. The fountain was designed between 1743 and 1751 by the Italian sculptor Francesco Robba who, inspired by Bernini’s Fountain of the Four Rivers on Piazza Navona during a visit to Rome, designed the fountain to represent the three rivers of Carniola: Ljubljanica, Sava and Krka. Steps representing the Carniolan mountains lead up to the fountain with its characteristic obelisk in the middle.