The Long Neck Karen are a tribe of women that are refugees from Burma living in the northern Thai hills. Mistreated in their own country, they fled to Thailand where they earn an income from tourism and an education for their children in Thai schools. Some say it is unethical to visit these hill tribes and equate it to visiting a human zoo. But because their status in Thailand is uncertain and because of the way the women have changed their bodies so cannot work in other jobs, being a tourist attraction themselves in the only way they can earn any money to support their families. 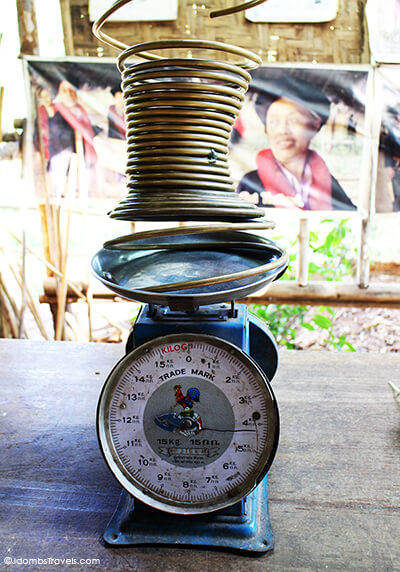 We visited the Long Neck Karen and the other Union Hill Tribes about an hour north of Chiang Rai. I remember seeing photos of these women, named the “giraffe women” by Polish explorer Vitold De Golish, in National Geographic years ago. I didn’t realize the weight of the spiral brass neck rings they wear until I saw one sitting on the scale. The brass neck rings weigh around 10 pounds (or 4.5 kilograms) and they can have up to an additional 30 pounds of rings that they wear on their arms and legs weighing them down. 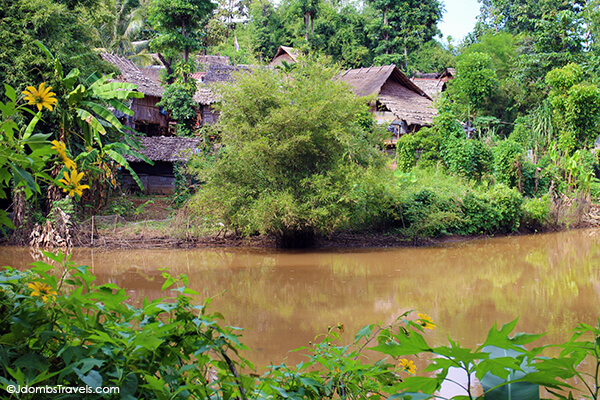 Thailand hardly is the “modern world” to which we are accustomed, though it disappeared even further as we wandered down the path of stairs made from mud and the bamboo houses on stilts came in to view. The stilts provide a place for livestock to live underneath, for storage, and even a place to escape the intense rays of sun beating down.

The Long Neck Karen women really stand out because of the brass rings that they wear. There are a number of reasons that are thought as to why they wear them. It is said the neck rings prevented bites from tigers and the women themselves say it is to distinguish their cultural identity. Anthropologists have hypothesized the rings are worn to prevent slavery by making the women less attractive to other tribes. 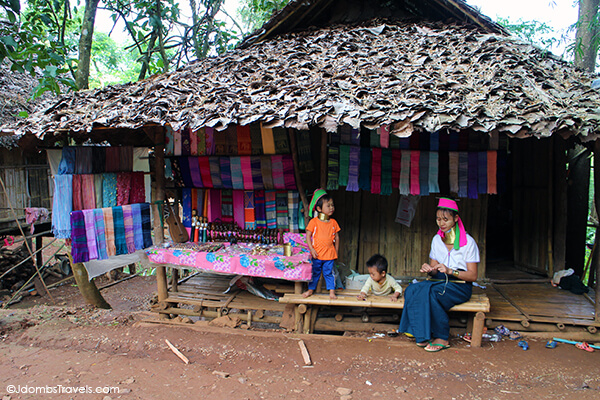 A mother plays with her children, one already wearing the rings around her neck

The rings are rarely removed, usually only done so for medical examinations or to replace the ring with a longer one. Girls begin wearing the rings are an early age, though they do not actually elongate the neck. The weight of the brass actually pushes down the collar bone and ribs, making the neck appear longer. 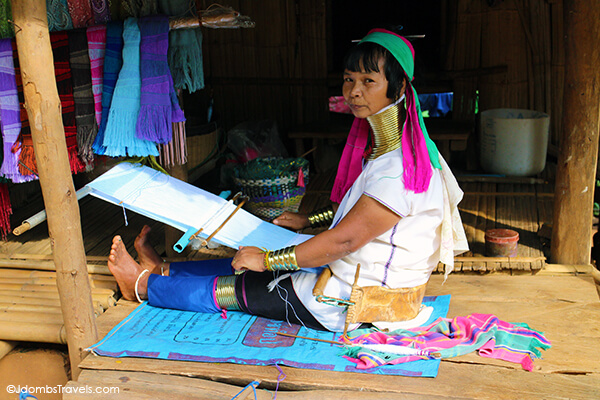 A Karen women weaving a scarf

Traditionally in Burma the Long Neck Karen worked in the fields and rice paddies, but as refugees here in Thailand they weave beautiful scarves and sell other trinkets to earn a living. The women only speak in their tribe’s dialect, though are very friendly. They’ll punch in the price of their handicrafts to a calculator, so there’s no problem in communicating a sale. 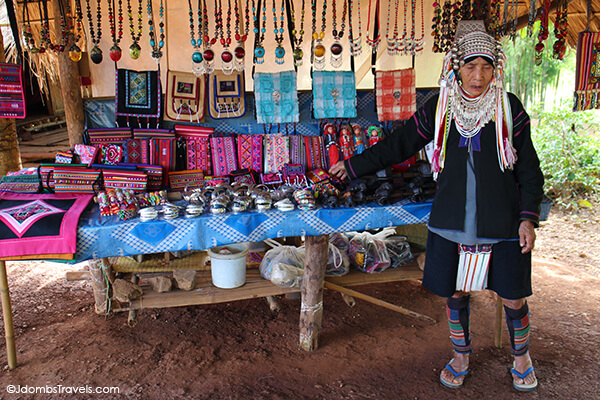 An Akha woman sells jewelry and other handicrafts 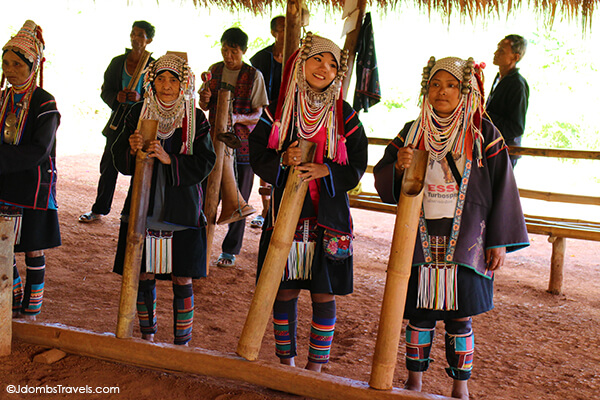 There are other tribes living in the village, like the Akha who migrated from Mongolia around 1500 years ago. They are expert farmers, though are very controversial because their large population and form of slash and burn agriculture has resulted in the destruction of old growth forest. In the Union Hill Tribe Village, the Akha women sell their handicrafts like jewelry and pouches or perform music for tips. 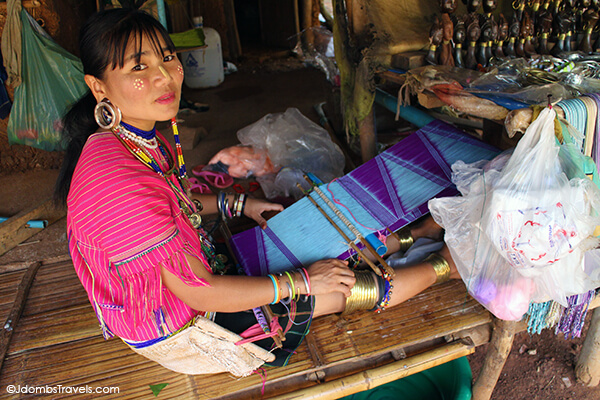 A Palong woman weaving a scarf

The Palong (Big Earring) also live here in the Union Hills Village. Like the Long Neck Karen, they too come from Burma and their livelihood was largely based on cultivating a large leaf called tanatep that is used to wrap Burmese scarves.

The hill tribes people just want a way to earn money to support their families and to educate their children. These villages help Long Neck Karen, Palong, and the other tribes living in the Union Hill Tribe Village to do just that. And hopefully the situation in Burma will improve so that one day they can return to their home land.