When we heard about the unspoilt beaches of Maremma National Park, so untouched and wild that red fox roam their shores, we just had to go! Just how exactly is that the Italy has this secret seaside that has escaped the commercialism of just about the rest of the country’s coastline? For centuries, this stretch of Italy’s coast was a malaria ridden swamp populated only by a few fisherman and cattle rearing cowboys known as butteri. The Medici actually began draining the marshes in the 18th century and the drainage continued under popes, Savoy kings, and even Mussolini. But the project wasn’t finished until the 1950s and the land became a protected area in 1975. 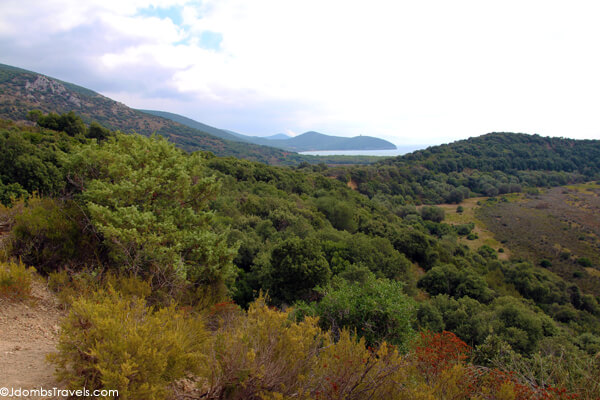 Marina di Alberese is the most easily accessible beach of Maremma National Park. We’ve heard that in summertime, cars stretch for miles back as one-by-one they patiently wait for a coveted parking spot in the Marina di Alberese’s car park. From the car park, it’s maybe a 5 minute walk to find a stretch of sand to spread out your towel.

The most rewarding and secret beaches aren’t so easy to reach. From the Alberese Visitor Center, a shuttle bus brings visitors 7 kilometers into the park where a number of trails begin. Here wild horses and long-horned cattle graze the wide open plains that stretch to the pristine sea. We had intended to trek the A4 route to Cala di Forno, which is around 13 kilometers round trip and takes an estimated 6 hours. We didn’t know the timetable for the shuttle bus and didn’t have quite enough time to complete the trek and make it on to the last shuttle bus of the day. 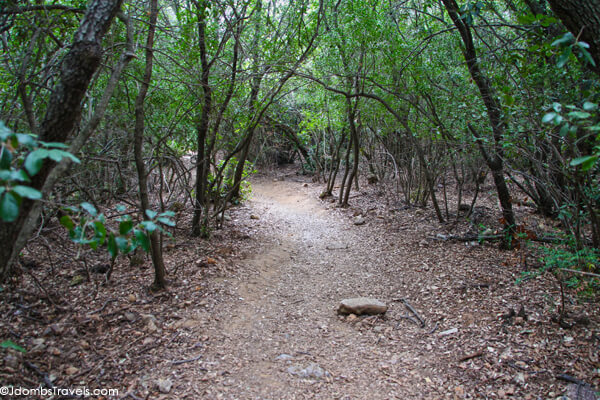 Trail leads through a thick forest 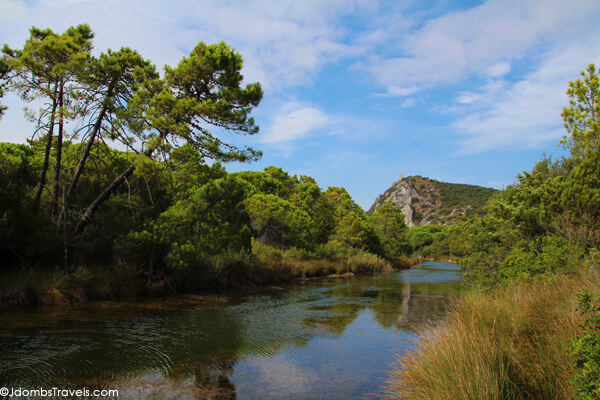 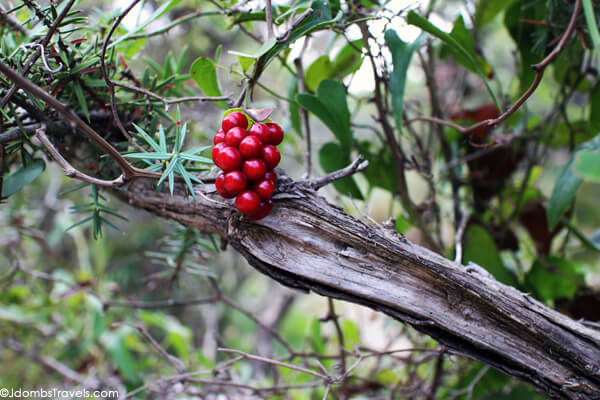 Instead, we chose the A2 Le Tori route at 7 kilometers round trip. The shuttle bus left us off with a group of other trekkers and beach goers at Pratini and we started through the thick woods on a paved road. Soon, we followed the trail signs into the luxuriant pine forest. Junipers, rosemary, cists and brooms nearly disguised the river but the trickle of the water lured us to its shores. Coastal sighting towers dotted the landscape. At the end of the path, the magnificent beach dotted with driftwood unfolded before us. Little paw prints from red fox led right to the sea. We could see the Cala di Forna and 20 or so boats pulled up to it. And though a storm was brewing out to sea, we could also easily see Isola del Giglio, where the Costa Concordia shipwrecked in early 2012. On a clear day, you can even see the Costa Concordia. 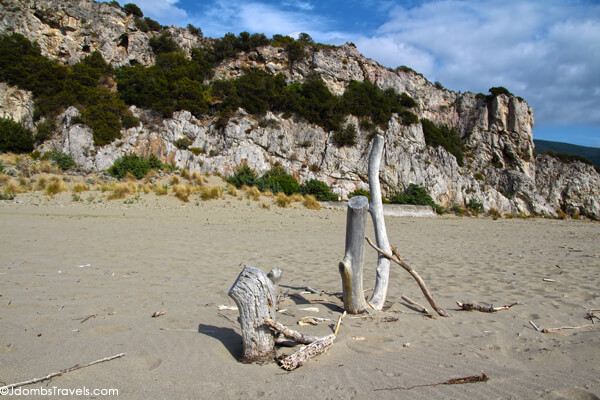 Romantic spot for a beach picnic 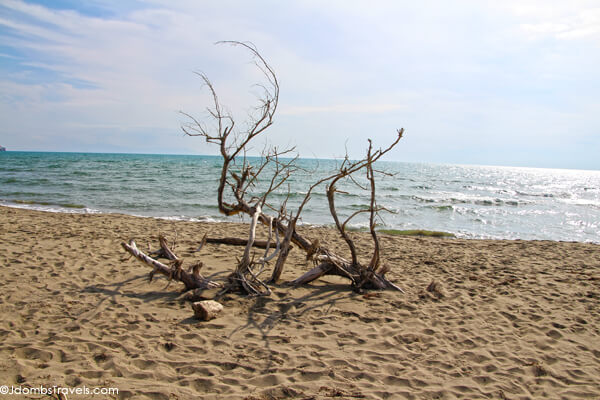 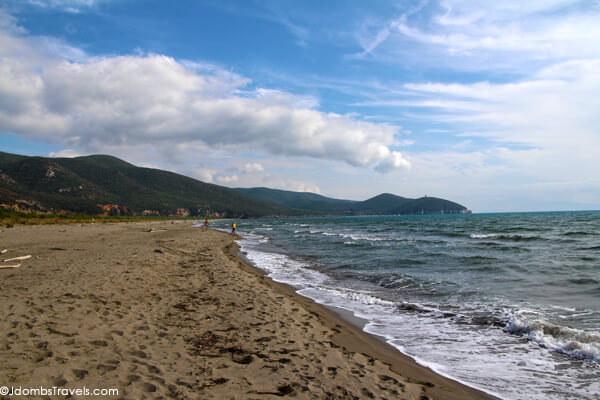 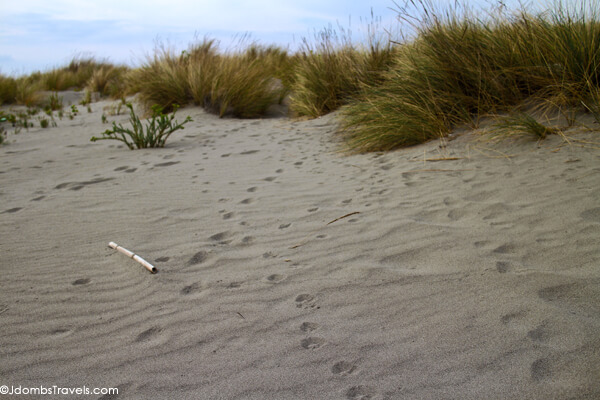 Where could the fox be hiding?

We sat for a while enjoying a picnic of cheese, salami, and crackers and just enjoying the serenity of the beach. Before too long, I was pulling off my sneakers to feel the warm sand between my toes as we walked hand-in-hand along the long stretch of beach. I was disappointed that the red fox, which we’d heard come out looking for handouts from visitors to Maremma National Park, never did show themselves. But as we leisurely walked back along the trail, I suddenly spotted a wild boar foraging amongst the olive grove. We watched the boar wag its tail to swat away flies (or maybe mosquitoes) and forage for olives it probably hoped had dropped from the trees for 10 minutes or so. Wild boar are typically nocturnal, so this was a real treat to spot one from a safe, yet relatively close, distance! 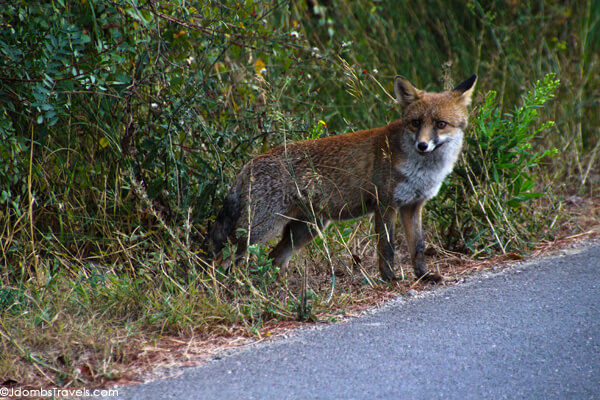 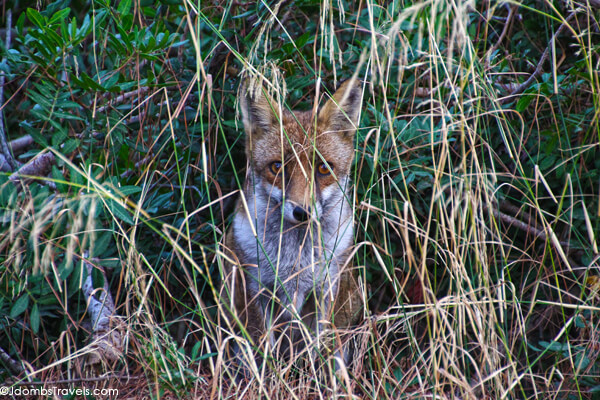 Maybe if I sit very, very still, they won’t see me…

My disappointment over the red fox didn’t last too long either. It was nearing sunset and we saw at least a dozen of them as we headed to the Marina di Alberese. Smart critters, the red fox sit so cute just begging for you to offer them some food and aren’t very scared of people. But please don’t feed them! They need to hunt and shouldn’t become dependent on visitors for food.

One of the best things about this stretch of coastline is the way we were able to combine warm sand between our toes with all the gourmet pleasures of the Tuscan countryside. It wasn’t long after the sun set that we were enjoying a glass of Maremma Toscana and wild boar pasta followed by wild boar caccitore at Agriturismo il Duchesco. La spiaggia e la dolce vita all rolled into one!

Getting ThereTips
Maremma National Park is most easily accessible by car, though the nearest airports are Rome and Pisa. The train runs to Grosseto and then the local bus company RAMA takes visitors the remaining 15 minute drive to the Alberese Visitor Center.