You are here: Home / Asia / Myanmar/Burma / 10 Must See Bagan Temples

With some 4000 pagodas to visit in just a 20 mile square radius at the Bagan archaeological site, how do you ever decide which ones are worthy of a visit? After ballooning over Bagan and noting some of the pagodas we wanted to see, we set out from our hotel on our e-bikes with a map and a plan. There are so many, that you do honestly get “pagoda’d out” after a bit and like churches in Europe, they can all sort of start to look the same. Dark, a Buddha, and local hawkers trying to selling you their wears. So we’ve sorted through our thousands of photos we took and put together our list of the 10 Must See Bagan Temples we found most interesting. 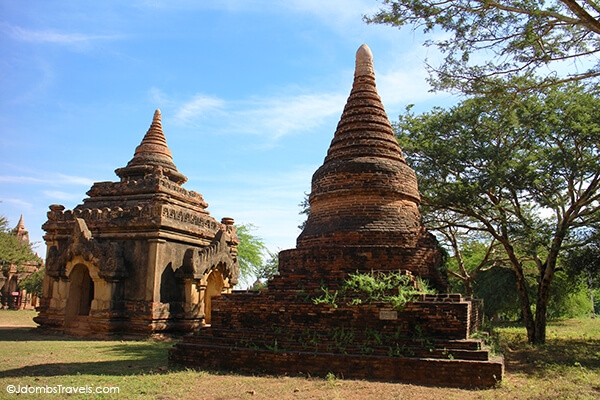 These are the Sein Nyet Sister Temples, with the elder sister, Sein Nyet Ama, built in the 12th century. Sein Nyet Ama is a typical square temple with four entrances. The younger sister is Sein Nyet Nyima. We liked that we had the Sisters practically to ourselves and that they were slightly overgrown with grass around them. 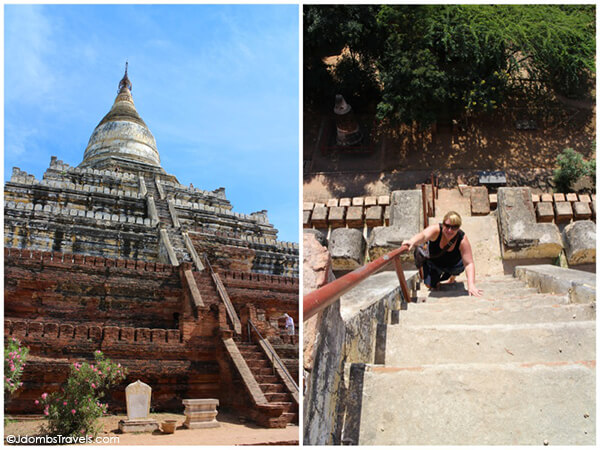 Shwesandaw Pagoda is very crowded at sunrise because it’s a great place to take advantage of the view over the surrounding temples. But just a few hours later, the crowds dissipate and you can take your time climbing the steep steps. It’s said to be one of the first pagodas built by Anawrahta, the father of the Burmese nation, and was built in 1057. Situated outside of the city walls and along with four other pagodas, it provides spiritual protection for Bagan. 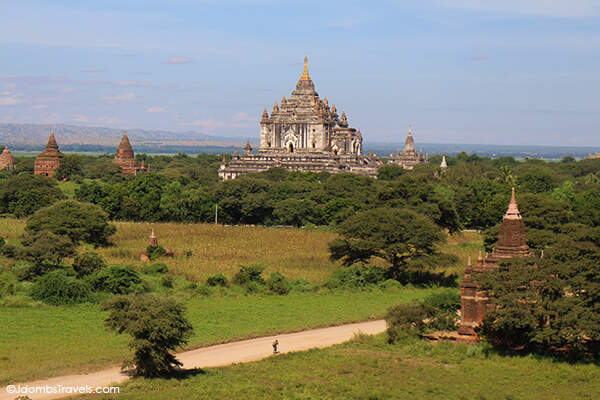 Built in 1144, Thatbyinnyu is the tallest of the Bagan monuments at 61 meters high. It’s adjacent to the much busier Ananda Temple, so again we found we had the temple practically to ourselves to explore. 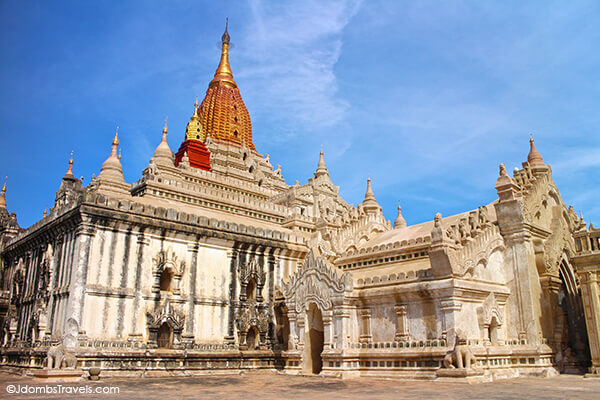 Built in 1091, Ananda Temple was fully restored after an earthquake in 1975. The spires were guilded in 1990 for the 900th anniversary of the temple. Entering the temple is like entering Disney World though. The location is convenient for the bus tours (what happened or horse and cart or bike as the only means of transportation in Bagan?) to unload and a market is also set up. Once you bypass all of that though, the courtyard is an extremely peaceful place to sit and admire the temple’s exterior. 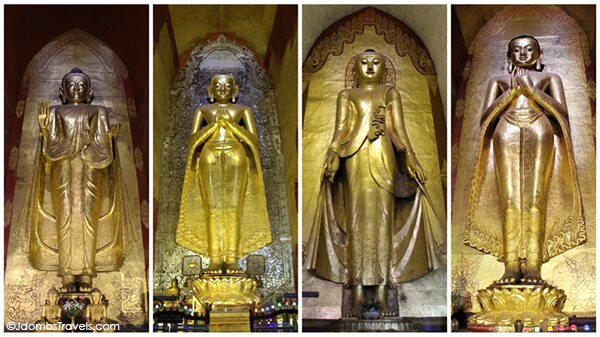 Ananda Temple has four Buddhas adorned with gold leaf and each faces a specific direction to represent attainment of the state of Nirvana. They each have their own name. As pictured above from left to right, Gotama faces west, Kakusandha faces north, Konagamana (the fifth of the seven ancient Buddhas) faces east, and Kassapa faces south. A local Burmese will happily tell you all about them for a dollar or two. 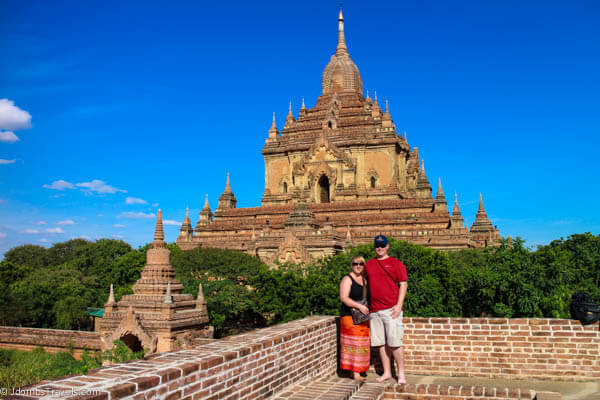 Tim and I getting a shot with Sulamani Temple behind us

You enter the red-brick Sulamani Temple through a gateway and it’s like entering another world as you walk the pathway to the entrance. It’s one of the most visited temples, so is another favorite of the hawkers. They’ll quit pestering you for a dollar and in return give you a tour. The temple has frescoes, though all but the ones on the south have been badly damaged because of their exposure to the elements. Because of the vaulted openings, the light filtering in this temple is lovely. 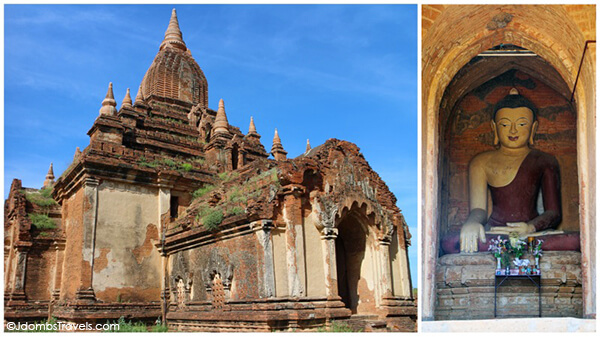 The Thambula Temple was built by Queen Thambula in 1255. Unlike many of the single story temples, Thambula is actually really well lit and you can easily see the Chinese influences in the Buddhas and murals. 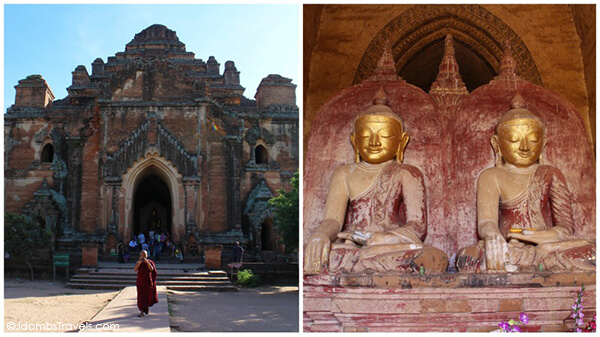 Dhammayangyi Temple was built by the tyrant King Narathu during his three year reign. From a distance, or ballooning above, the temple looks like an Egyptian pyramid and it’s the most massive in size structure in Bagan. Locals refer to it to the haunted temple and think it is haunted with the sins of the ruthless King Narathu who killed his own father, brother, and queen. Others think there are hidden treasures behind the blocked up walls. The temple is also home to the rare double Buddha statues. 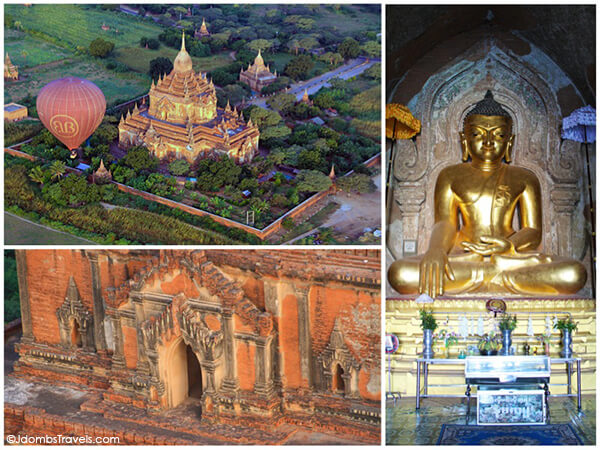 Gawdawpalin Temple was built in 1175 by King Narapatisithu. Legend has it that the King has committed a terrible crime against his ancestors and as punishment went blind. Brahmen astrologers advised the King to make amends by making idols of his ancestors and placing them on thrones. The King worshiped these idols and begged for forgiveness. Miraculously he eventually regained his sight. The pagoda had other secrets besides healing powers; after the 1975 earthquake a secret passage was revealed. Mysterious! 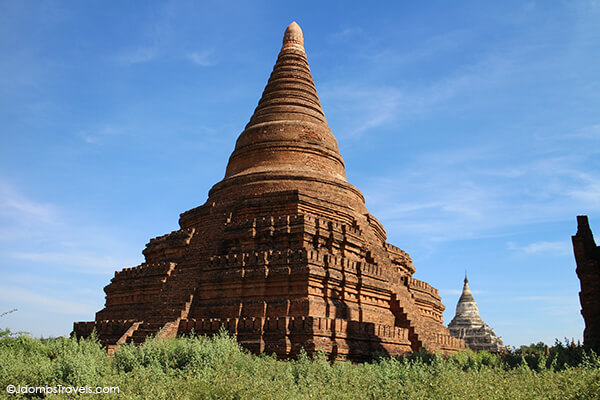 That’s not actually the name of it and we have no idea the name. But we liked this one which is another great for climbing and is uniquely shaped from most of the others. 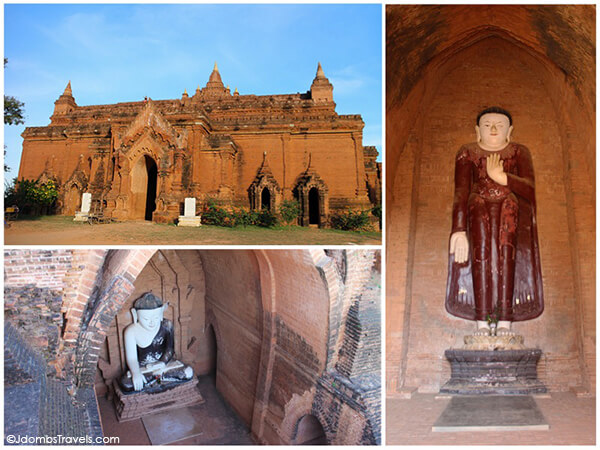 Pyathatgyi Temple is the last great construction of the dynasty of Bagan, so its a fitting place to end your day touring the temples and take in the incredible sunset. Read more about the Bagan sunset experience.

TipsWhere To Stay
You are required to have a Bagan Archaeological Zone pass. If arriving via the airport, you must purchase it there and it is a 5-day pass for $15US. Be sure to carry this with you as staff do check.
We stayed at the Bluebird Bagan Hotel and rented the e-bikes right from the hotel, which was very convenient. The hotel is very close to the Bagan Archaeological Zone, as well as restaurants. There is also an onsite restaurant at the hotel.

This article contains affiliate links. When you book on Agoda through our affiliate site, we earn a small commission at no additional cost to you. It just helps us keep things running here at Luxe Adventure Traveler!