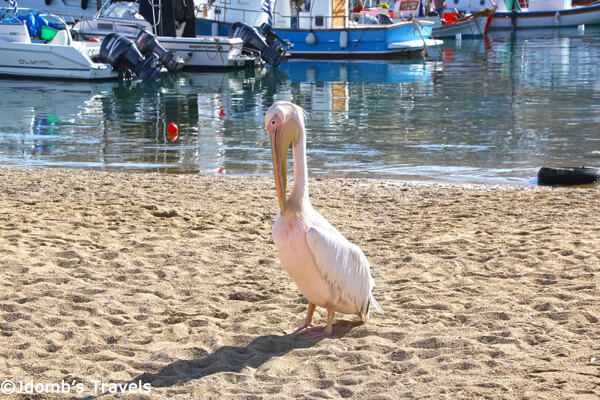 Mykonos’ most famous resident is a pink pelican named Petros! As the story goes about how Petros came to be Mykonos’ official mascot, a fisherman found a wounded pelican offshore in 1958, brought him ashore, and nursed him back to heath. Somewhat of a grumpy bird, the fisherman named him Petros, which metaphorically means old and grumpy in Greek. When the fisherman released Petros, he was surprised to find that the pelican remained on the island, meandering its narrow alleys and fishing in the harbor. As if two pelicans weren’t enough, another injured pelican was found offshore a few years ago and it was nursed back to health and adopted. So now, instead of one famous pelican, Mykonos has three!

The three pelicans freely wander the little streets of Mykonos where the loving people share their fresh catch of the day with the beloved birds. Which of the three pink pelicans we spotted on the sandy beach of the harbor, I don’t know for sure. But I like to think it was Petros himself! As I approached, Petros tossed his head back and opened his mouth wide, probably hoping I’d toss him a big, fat fish. Sadly, I had no fish to feed Petros.

But I learned later in the day that Petros didn’t go hungry. In fact, he had wandered into OPA Taverna just before we did and snagged himself some lunch (more on the delicious OPA Taverna coming soon). The proprietor even had a video of himself feeding the plucky pelican, which he proudly pulled out his iPhone to show us! Have you been to visit the Statue of Liberty 🗽?

I’m writing about NYC from our trip last month,