You are here: Home / Europe / Russia / Peterhof: The Russian Versailles 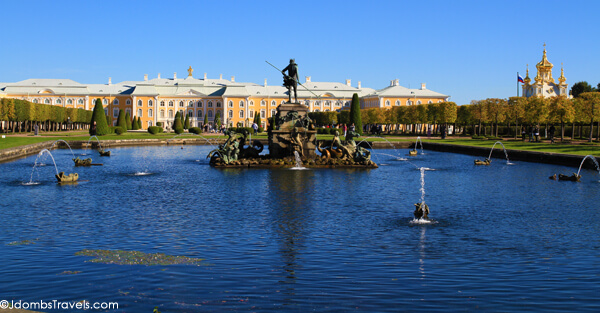 Poseidon and the Grand Peterhof Palace

Our visit to Peterhof was on, without a doubt, the nicest day we had during our entire time in Russia. There wasn’t a cloud in the sky and the sun beating down was a welcome reprieve from freezing in Yaroslavl just two days before. Our guided visit with our G Adventures group stuck to just the Peterhof Gardens, and in all honesty, after a week of rainy days and countless churches, that was just fine by us. We were just happy to be out in the fresh air and warmed up by the sunshine. Versailles was the inspiration for Peter the Great’s desire to build an imperial palace and gardens in the suburbs of his new city and from the moment we piled out of the bus and began meandering down the pebbled lanes of the Upper Gardens toward the Grand Palace, it was already easy to see some of the similarities. 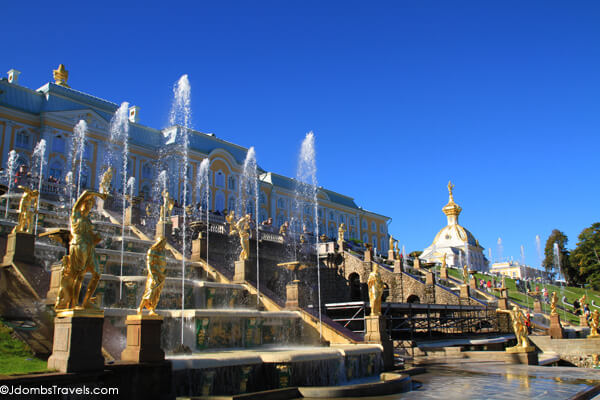 The Grand Peterhof Palace sits majestically, reigning over the gardens below and a channel runs from the Grand Cascade straight out to the sea. The Grand Palace and the Grand Cascade are the centerpiece of the entire Peterhof complex. Unfortunately, a concert had taken place recently and the stage obstructed our view out to the sea, but it was spectacular all the same. 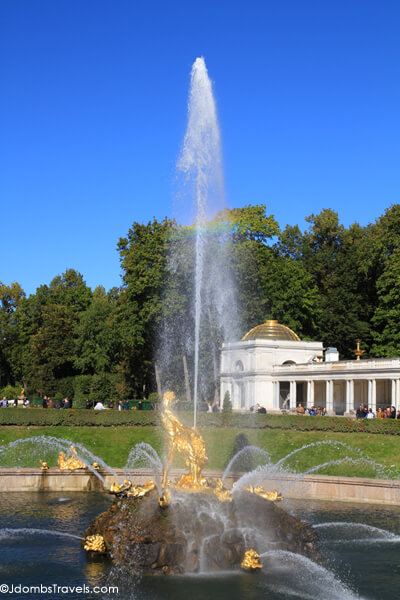 Samson and the Lion

The waters of the Grand Cascade flow into a pool below and the Samson Fountain stands in the middle of the pool. It was installed in 1730 and depicts the moment when the biblical hero Samson tears open the jaws of a lion, representing Russia’s victory over Sweden in the Great Northern War. A 20-metre-high vertical jet of water, the highest in all of Peterhof, shoots from the lion’s mouth. It’s the very best spot for a photograph, our guide tells us as she points out a rainbow that is usually seen on sunny days.

Not only is Peterhof referred to as the Russian Versailles, but it also known as the Capital of Fountains. No wonder! In total, there are more than 150 fountains throughout Peterhof Gardens. We surely didn’t see every one of them, but we saw many of the most important in the complex. Love locks along the Sea Channel

As we make our way down the Sea Channel and into the Lower Gardens, a bridge crosses the channel. Like so many famous lover’s bridges in Paris, Florence, and just about every other city these days, a smattering of love locks hang from the bridge. But our guide barely pauses; she notes that the bridge is one of the worst spots for pickpockets. I clasp my bag and take a few minutes to snap some photos anyway before running to catch up. As I join the group again, our guide is pointing out the Adam and Eve Fountains. They were ordered by Peter the Great in 1718 and made in Venice. The pair of fountains were installed in 1721 and represent the story of Mankind. I’m beginning to notice the biblical theme of the fountains and recall the stories from my Catholic school days. We come to the Lion Cascade and I’m taken with Greek colonnade. The name comes from the bronze lions beside the temple-like structure, though the Nymph Aganippe Fountain is at the temple’s center. 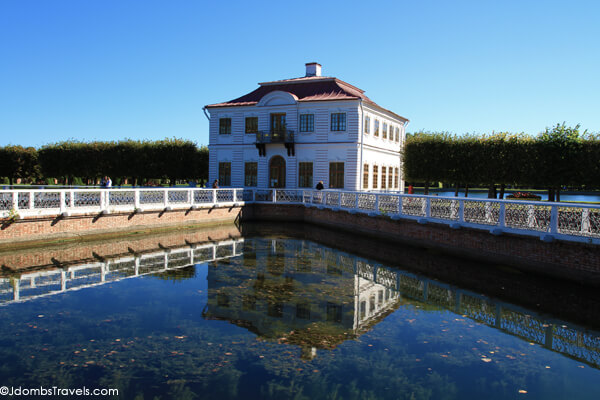 The Marly Palace was inspired by Marly Le Roi in France

On the far western end of the Peterhof Gardens sits the Marly Palace. Marly Le Roi, just outside Paris, was Louis XIV’s peaceful hunting lodge retreat from Versailles. Peter the Great visited in 1717 and, of course, had to have a private retreat all his own away from the Grand Peterhof Palace. Today it was serving as our peaceful retreat from the busier central part of the Peterhof Gardens. 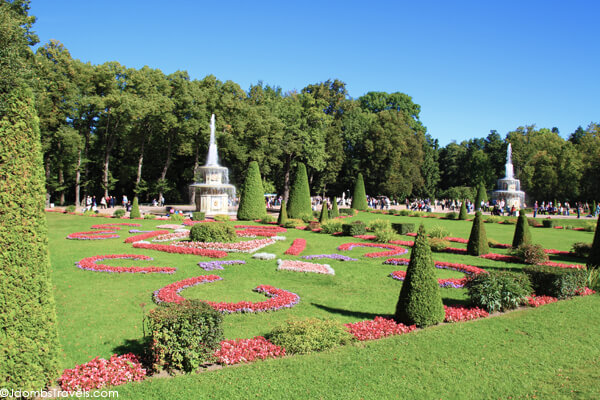 The Roman Fountains in the Parterre Garden

Practically clear on the other side of Peterhof Gardens, we came to the Roman Fountains. The two grand double-tier fountains were modeled after the fountains in St. Peter’s Square in Rome. Sadly, the original fountains were destroyed during the Nazi occupation of 1941-44. The decorative details were created from surviving cast and reproduced according to photographs and drawings of the originals. 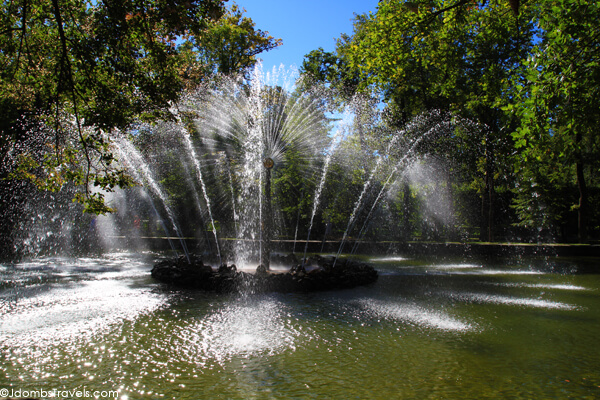 ‘The Sun’ at Peterhof

We ended our official guided tour in the Menagerie Garden at the Sun Fountain. Our guide enthusiastically told us it is her favorite and the most spectacular in Peterhof Gardens.Water spurts out of a gilt disk forming sprays like the rays of the sun. The domes of the Grand Palace Church Peterhof is almost overwhelming in its opulence. There is gilt everywhere you look, so much so that you almost don’t know where to look! Peterhof was absolutely stunning and I’m glad we had the help of a guide to easily cover the massive grounds.