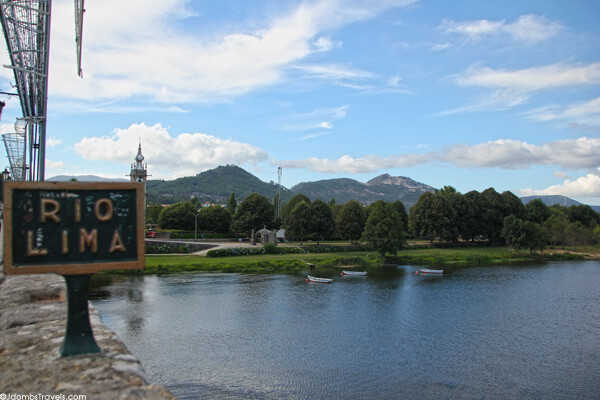 The Romans left their mark from ancient Rome to Jerash in the Eastern Roman Empire and everywhere in between. In northern Portugal, a Roman bridge stretches across the Lima River and according to legend, when the Romans reached this point in their march across Iberia, they were afraid to cross the river because they thought this was the Lethes River, a mythical river of oblivion. The Romans feared that if they crossed the river, they would forget everything. Only after their leader, Decimus Junius Brutus, plunged ahead across the river and turned back to shout to his soldiers, calling them one-by-one by name, did they obediently follow. The Roman bridge after which Ponte de Lima is named marks the very spot that the Romans dispelled the myth and braved the waters to march on. 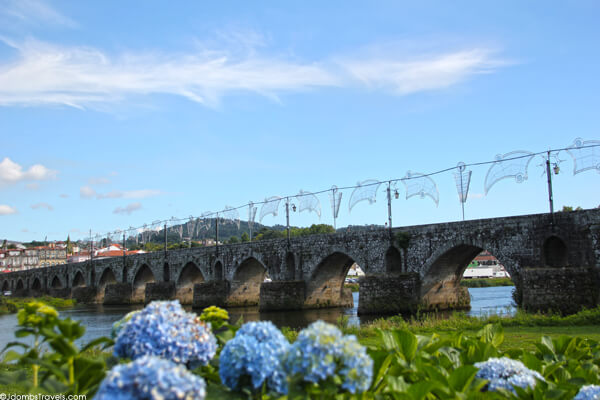 These days the myth itself has nearly been forgotten and the river is a popular place to kayak, spread a picnic blanket out along the river beaches, or just stroll across the bridge and through the charming little town as I did.

I visited on a Tuesday, missing both the famous Monday medieval market that has been held twice monthly since 1125 and the Feiras Novas fair, chartered by King D. Pedro IV in 1826 and held over three days annually every mid-September by literally just one day. The Monday medieval market offers everything from baskets and wine barrels to fresh fruit, cheese and bread, shoes, hats and clothing. The Feiras Novas Feiras Novas combines market and fair featuring folk dances, fireworks, and brass bands. A smaller version of this remained with market stalls with everything from handcrafted shoes and clothes to candies and churros lined the river bank.

Wandering a bit aimlessly around the town, I came across Adega Cooperativa de Ponte de Lima, a local wine cooperative who produces one of the best vinho verde wines and continues a tradition brought to the area by the Romans. On Rua Cardeal Saraiva stands a bronze statue of a bull, commemorating Vaca Das Cordas. Vaca Das Cordas is a centuries old tradition that takes place on the day before Corpus Christi. A bull is tied to the iron grill of the bell tower window at Parish Church before then running around the building three times. The tradition still happens today and after running the three laps around Parish Church, the bull is led through the streets to Largo de Camoes, the main square, and then onto the sand riverbank. 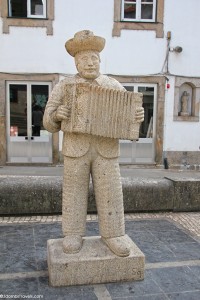 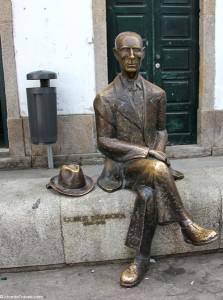 In another square, the Earl of Aurora, born in Ponte de Lima on April 19, 1896, sits in bronze glory. And yet another, a man playing an accordion is frozen in stone. 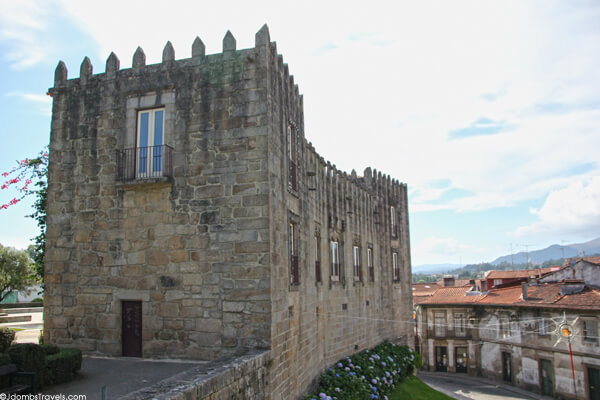 The Palace of the Marquis sits above the town and houses the tourist office which sells traditional handicrafts of the region. The basement of the palace has a small archaeological museum and a small park located at the back of the palace has sweeping views over the town. Near the palace and located just outside of the City Municipality is the O Amor Eo Tempo, a poem about love and time, written by the famous Ponte de Lima born poet António Feijó.

Had I had more than just a few hours to spend in Ponte de Lima, I would have loved to indulge in a meal there. I was told that some of the best food in all of Portugal can be found here in Portugal’s oldest village. Ah, maybe next time!