You are here: Home / North America / Remembering 9/11 at Ground Zero It’s been 11 years but I still remember the details of 9/11 as though it happened yesterday. Tim and I were living in Las Vegas at the time in an apartment just behind the Venetian (okay, I just realized that is a bit ironic). I was getting ready for work and had the radio on when I heard the report about the first attack. Tim was sleeping and I shook him while frantically saying a plane had flown into the World Trade Center. He looked at me confused and said “The casino?” “No! In New York City!”, I shouted.
We turned on the tv just as the second plane flew into the tower and left chills running down my spine. I wanted nothing more than to crawl back into bed and watch helplessly as this horror story unfolded before my eyes but work called. So I finished getting dressed and admittedly was a little glad to be leaving my apartment that was steps away from the Las Vegas Strip. Surely if there were to be an attack on our side of the country, wouldn’t Las Vegas be a target?

I was working at Blockbuster Video as a store manager at the time and we were one of the markets selling DirectTV. So I immediately turned on the tv to CNN and went about opening the store for the day, all the while thinking that no one would care about renting movies on this day. And I was right. Just as I was glued to the tv at work, millions of people across America were doing the exact same thing.

It was a day that put a massive hole in NYC’s skyline as the Twin Towers came crashing to the ground and a day that forever put a hole in our hearts. 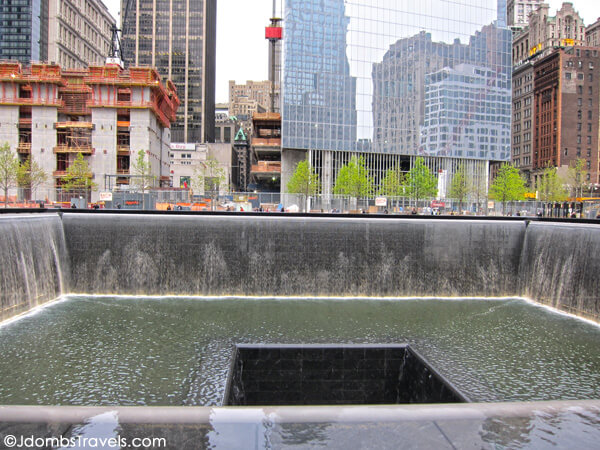 In April 2012, I made a trip to New York City to meet my mom and we reserved tickets to visit the 9/11 Memorial. It was actually my first visit to Ground Zero despite having been to NYC many times and as we stood in a long line waiting to go through security, the memories on that morning came flooding back. I don’t personally know anyone that died in the attacks that day and I had never even been to New York City prior to 2005. But these attacks forever changed America and the world we live in. They are the reason Tim spent months deployed to Afghanistan, every single second of every single day of which I worried over his safety until I could wrap my arms around him again. As I stood looking at the bronze panels edging the twin Memorial pools where the Twin Towers once stood, I thought about the senseless loss of lives. I wondered how one man could be filled with so much hate. I thought about how each one of us is practically treated as a potential criminal any time we want to board an airplane as a result. I tried to fathom what it must have been like to be in New York City that day.

And I felt renewed with hope as I marveled at the Survivor Tree, a tree that was discovered amongst the wreckage at Ground Zero with snapped roots and a blackened trunk. In 2001 it only stood 8 feet tall. It was nursed back to health and replanted at the 9/11 Memorial site and stood 35 feet tall as I watched people gather beneath it to pose for pictures. The tree is a sign of our country’s resilience and will to bounce back. To let nothing crush us. To let nothing hold us down. I gazed up at the beautiful One World Trade Center, which would become NYC’s tallest building just a few days later. It may have taken us 10 years to rebuild, but we were moving on, pushing ahead, and standing tall again.

Where were you on the morning of September 11, 2001 and what do you remember from that day?