You are here: Home / Europe / Italy / Grotto of Catullus and Sirmione

Sirmione is a fortified town that juts out onto Lake Garda on the Sirmio Peninsula. Having never been to Sirmione even though it is a mere two hours away, and trying to travel a little more closer to home these days, we decided to pay a visit. We mainly wanted to see the Grotto of Catullus, the Roman ruins said supposedly to be that of the Roman poet Catullus’ country villa. 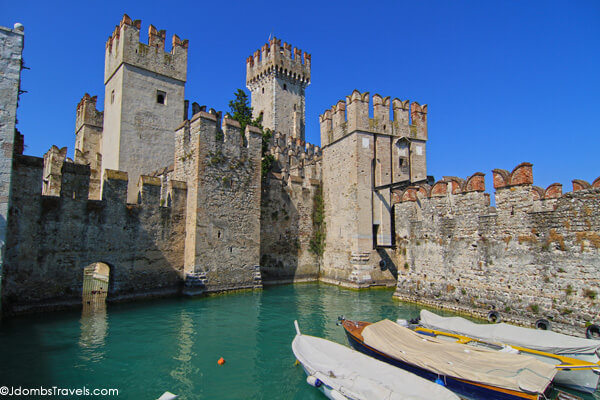 Sirmione is said to be the Pearl of Lake Garda and it is definitely a beautiful lakeside town. We entered the old town via the bridge leading through the 13th century Scaliger Castle, used by the Scaliger fleet and a rare example of medieval port fortification. The Scaliger were a noble family of Lords of Verona and the fortification was part of the defensive network surrounding Verona. Northern Italy had a very turbulent past, though the first military venture onto the Sirmio Peninsula was to wipe out the population of Sirmione, who were heretic Cathars. Some 2,000 Cathars were burned at the stake in the Arena of Verona. 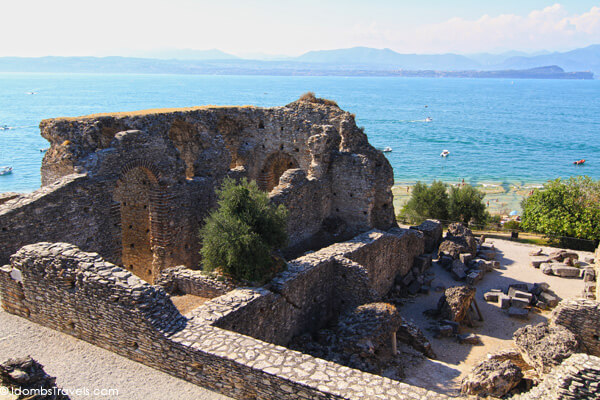 The site got its name because it resembled a series of partially collapsed caves when it was discovered in the 15th century. It was Napoleon who carried out the first studies of the villa and excavation and restoration didn’t begin until around 1940. The Soprintendenza Archeologica della Lombardia purchased the entire site in 1948 and studies and excavations are still being done to learn more about the villa. 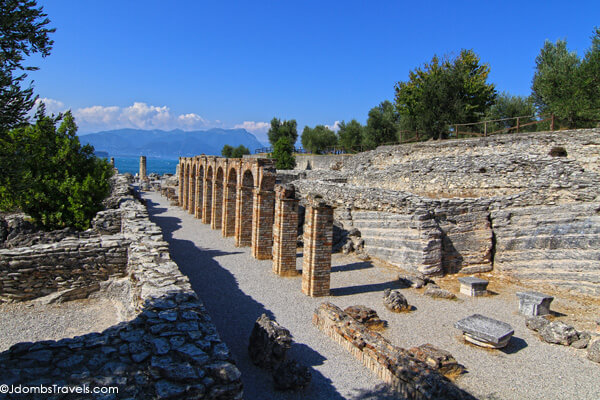 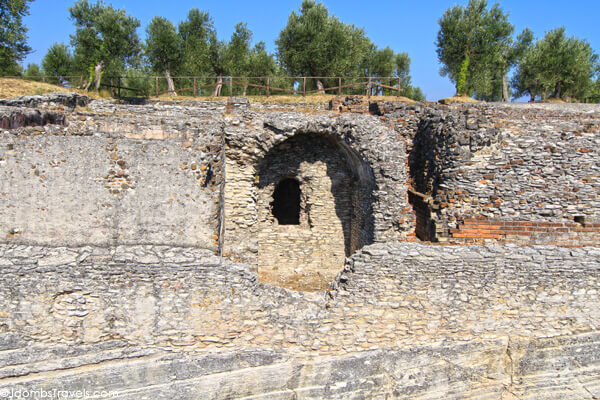 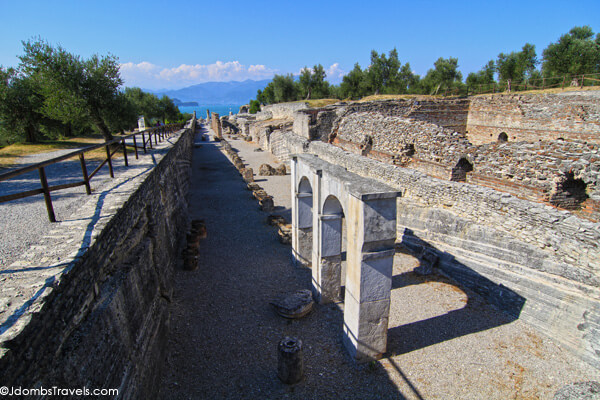 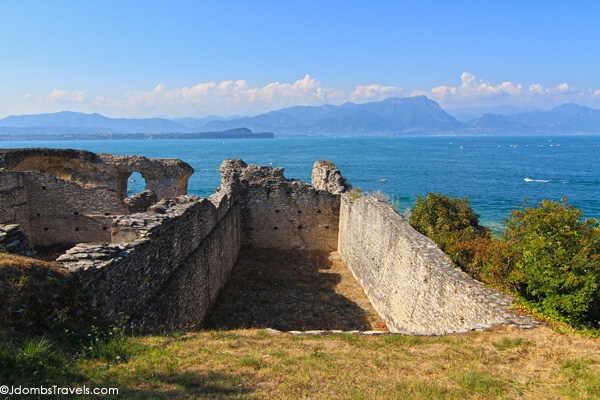 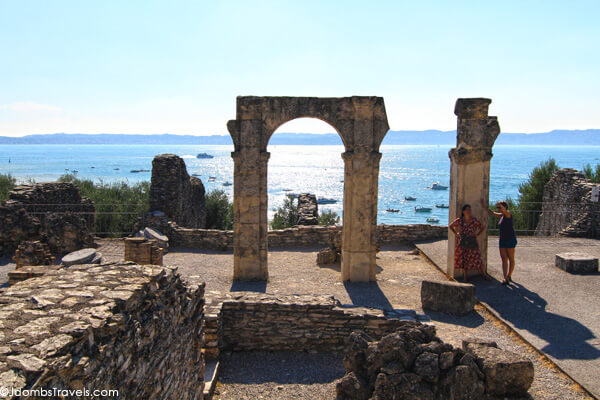 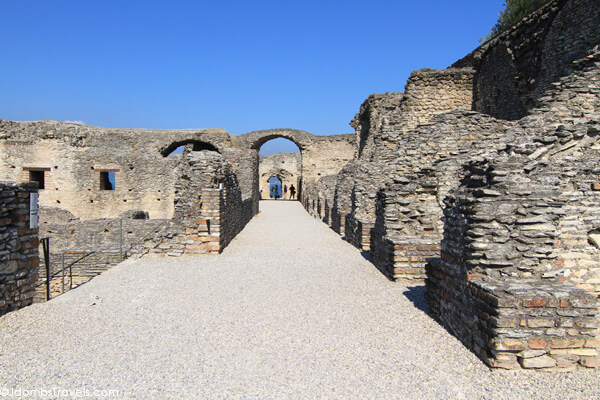 There are signs in multiple languages including English explaining the layout of the villa as you traverse the site. Visitors are free to walk around and through the various rooms and buildings of the villa, many of which were three stories high. The olive grove also has wonderful views of the pier, small beach, and lake below. Note that there is no beach access from the grotto though. 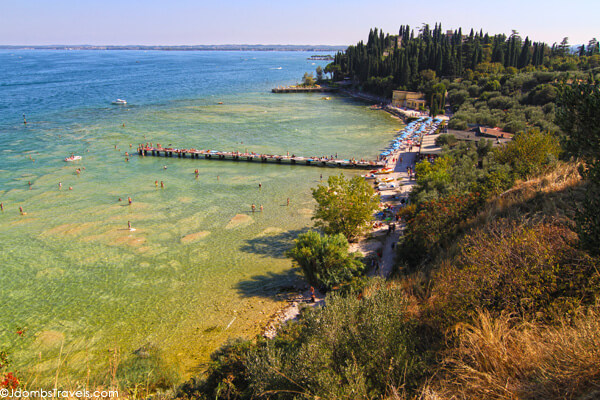 The Lido delle Bionde beach is reached in about 15 minutes from the center of Sirmione. The beach is made of large, smooth clay rocks and the water is said to be the clearest of all of Lake Garda. 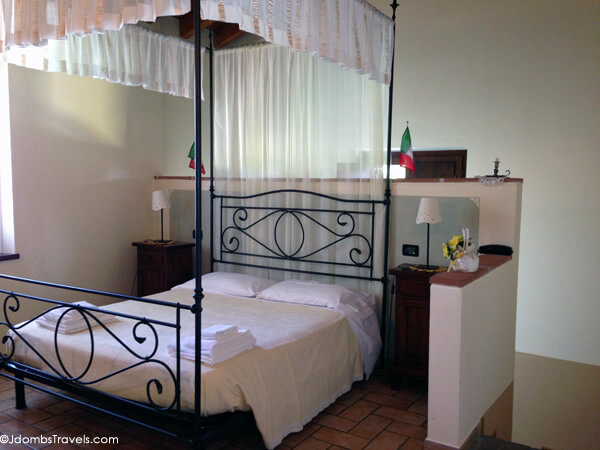 Hotels in Sirmione, especially in summer can be expensive and hard to find availability. We stayed just a few kilometers away at Agriturismo Corte Fattori. It was very quiet, had an above ground swimming pool to cool off in, and the room had air conditioning. Simple, yet lovely. Breakfast is served on the patio and is included. In high season the prices is €75 per night. 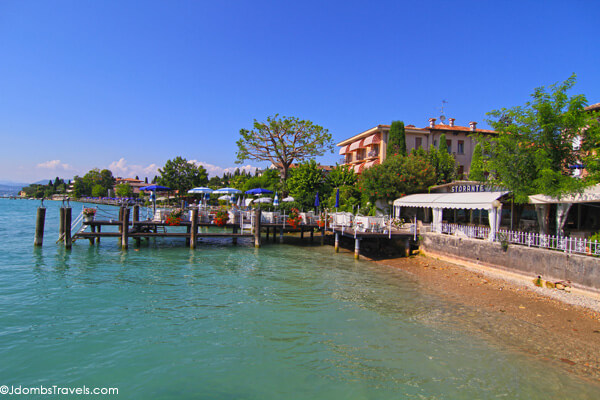 We found all of the restaurants right in Sirmione overpriced. Calamari and fish dishes were more than double the prices anywhere else, though pizzas were reasonable at around €9 each. We chose to skip the overpriced restaurants for a fresh, locally produced meal at Cascina Capuzza just a few kilometers away. 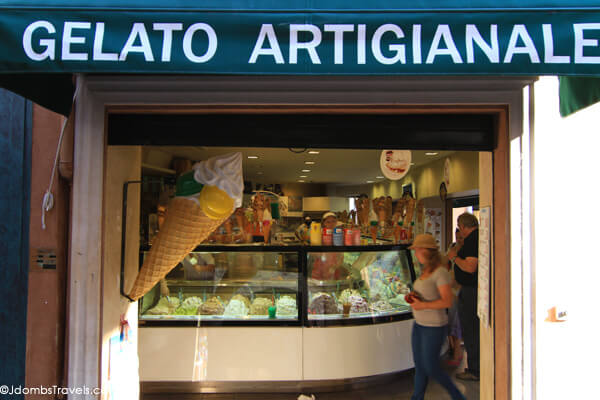 Nothing artisan about this gelato shop, except the name!

Also beware of the gelato shops! We really had to hunt for one that didn’t feature bins of fluffy, sky-high gelato. “Poofy” gelato is the first sign it is made from a mix and not real gelato. Also be on the lookout for unnatural colors, like mint green mint gelato – mint should actually be white. (For more artisan gelato spotting tips and other tips, check out our post on JohnnyJet.com about 12 Things You Never Knew About Italy.)