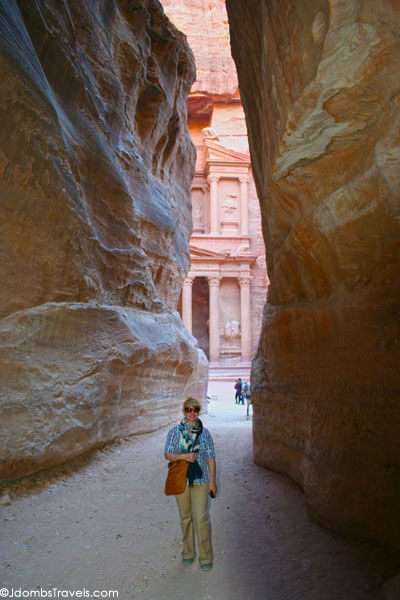 We’ve all seen Indiana Jones ride down the canyon with the temple coming into view in Indiana Jones and the Last Crusade. That canyon is actually called the Siq and that “temple” is the Treasury in the ancient city of Petra in Jordan. Petra was lost to the Western World from about the 14th century until the early 19th century. Today, Petra is one of the world’s largest and most important archaeological sites. In 2007, Petra, Jordan was also named one of the New 7 Wonders of the World.

Established sometime around the 6th century BC as the capital city of the Nabataeans, a nomadic tribe who settled in the area and laid the foundations of a commercial empire that extended into Syria, Petra was carved into the red-rose limestone of the Wadi Musa desert. Unlike Jerash, the monuments of Petra are scattered over several miles and nothing prepares you for the sheer size of the city. It simply must be seen to be believed. 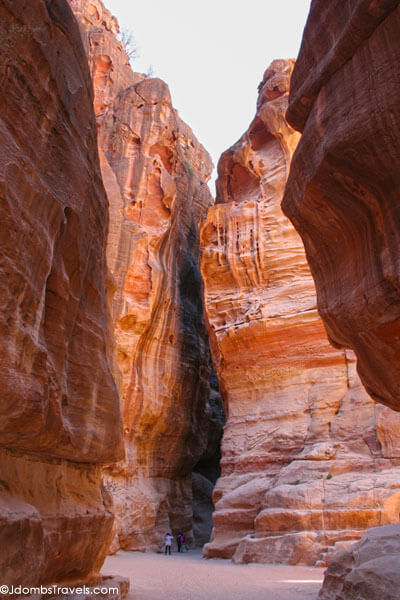 Walking through the Siq

A visit to Petra begins with a walk through the Siq, a narrow gorge, over 1km in length, which is flanked on either side by soaring 80 meter high cliffs. As you reach the end of the Siq you catch your first glimpse of Al-Khazneh (the Treasury). This is simply awe inspiring even though you have anxiously been anticipating its view as you trek down the Siq. 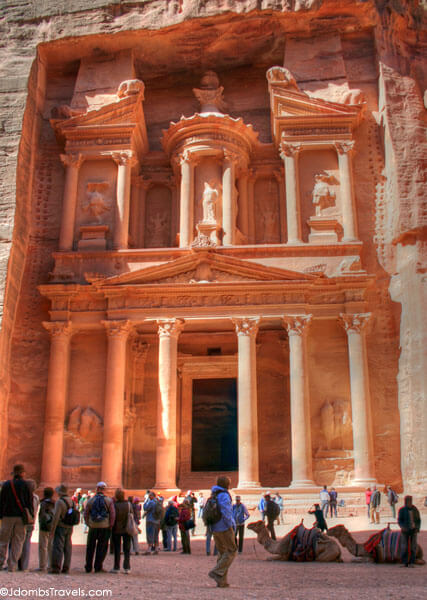 It is believed Al-Khazneh was built as a tomb for King Aretas III around the 1st century BC. It is 40 meters high and 28 meters wide, consisting of two floors. The facade has six columns and between them are statues carved representing the horsemen, sons of the god Zeus. The middle round part of the upper floor is called the tholos and supports the Urn. There is a superstition attached to the Urn on the top that it contains a tresor (vault) and this is how the monument got its’ name “the Treasury.” 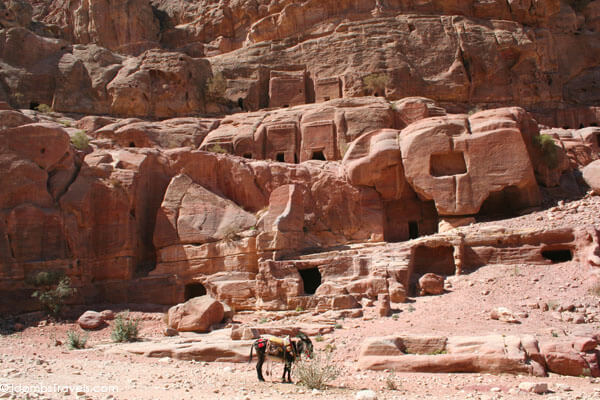 While we didn’t want to leave the magnificent Treasury, there is much more to be seen at Petra. Continuing on we reached Facades Street, which is a collection of Nabataean houses, all of which are carved into the rock. 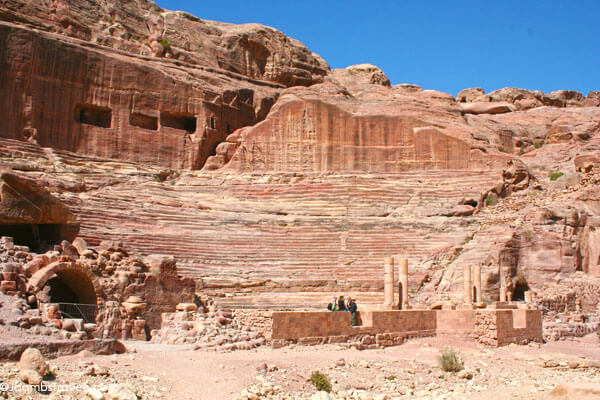 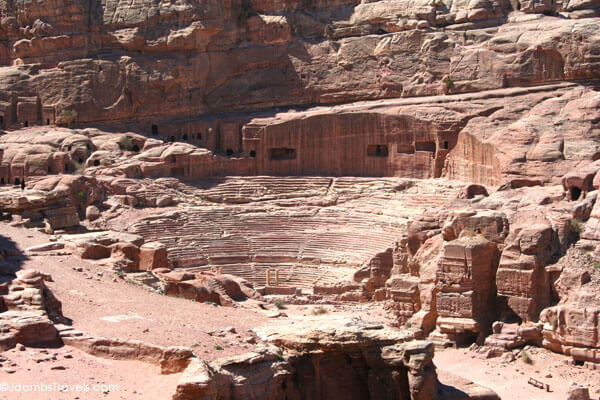 The Theater seen from the Royal Tombs

After Facades Street we came to the Main Theater, which dates to the 1st century AD around the time of the rule of King Aretas IV . The theater was carved from the rock in one piece and could seat 6,000 people. 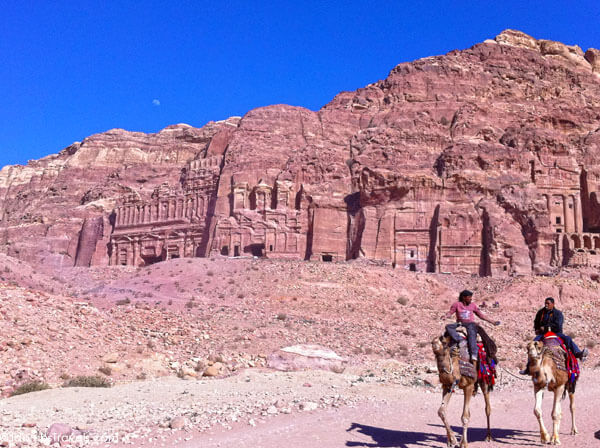 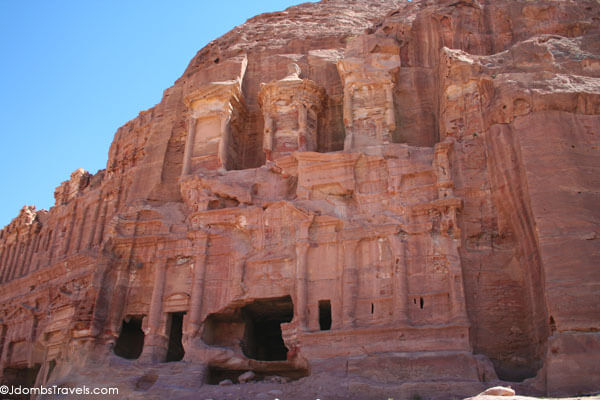 After the theater, the Royal Tombs come into view at the base of Al-Khubtha Mountain. The Nabataeans are said to have taken great care to honor their dead and these massive, intricate tombs certainly demonstrate that. 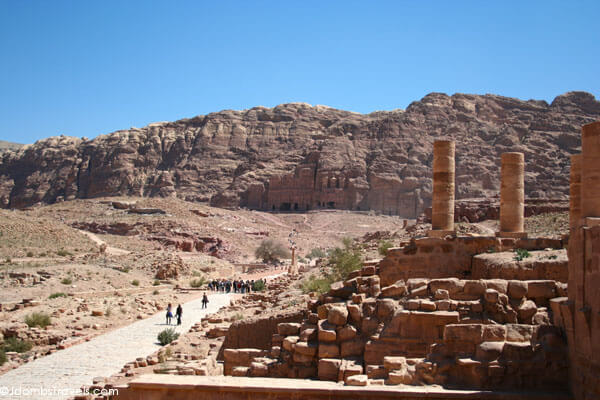 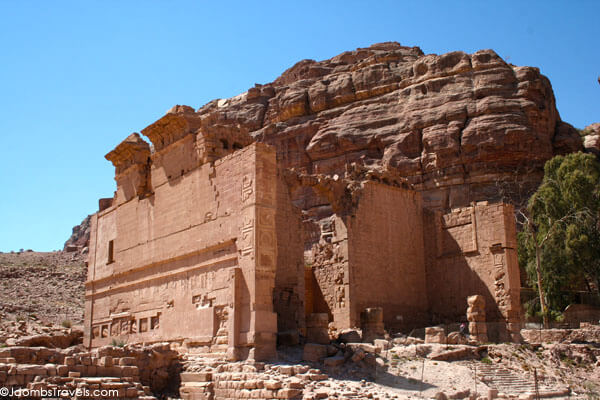 From the Royal Tombs, we walked toward the City Center along the paved street flanked by soaring soaring columns on both sides. This is where the commercial center was. The street leads to the Petra Great Temple, which is currently being excavated by Brown University. The Great Temple is the largest freestanding building yet excavated at Petra measuring over 24,000 square feet. 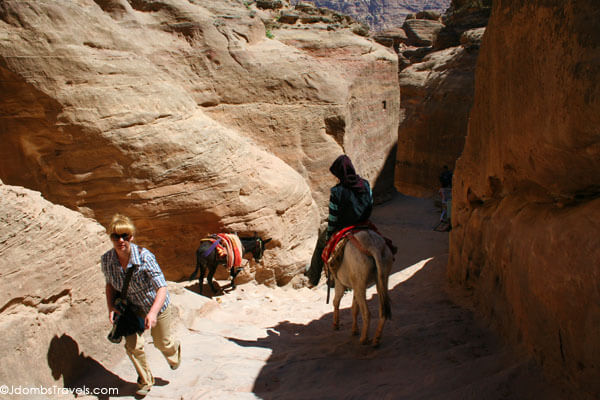 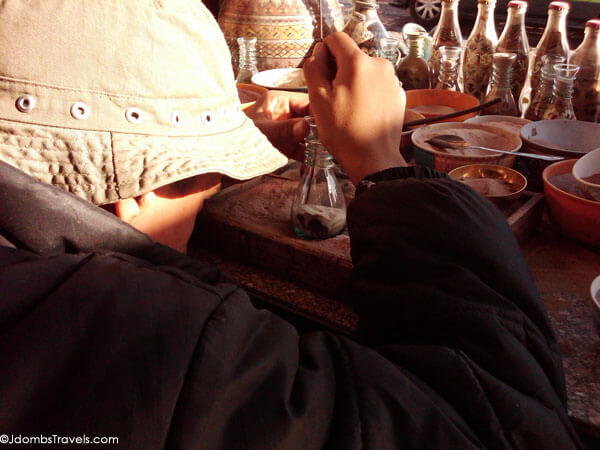 It felt like we’d been walking for miles at that point, but we began our climb up the 850 winding stone stairs to the Monastery, not without me groaning a bit. For a few Jordanian Dinars, you can take a “Jordanian BMW” (donkey) to the top. We (Tim) opted for the climb. As we climbed, we passed the small stalls of a nearby Bedouin settlement that had set up selling local handicrafts, such as pottery, Bedouin jewelery, and bottles of striated multi-colored sands from the area. About two-thirds of the way up, a Bedouin woman invites us in to her tent for tea and I more than happily hand over a few Dinars for a break and a refreshing drink. 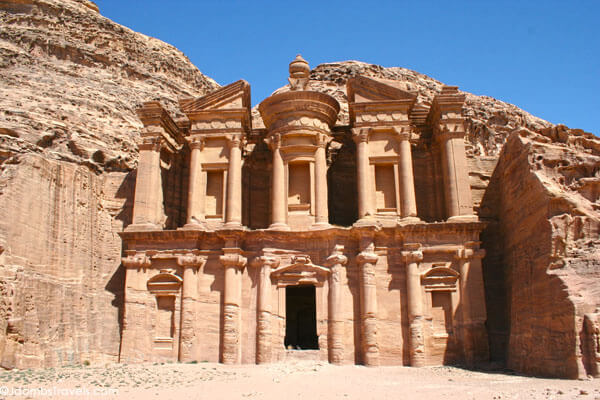 Continuing up the steep stone staircase, the Monastery finally comes into view! The Monastery is beautifully carved, though much less decorated than the Treasury, and so huge that even the doorway is several stories tall. It is similar to design of the Treasury, but it is much larger (50 meters high x 45 meters wide).

We sit at the cave bar for a little while admiring the Monastery while enjoying Bedouin lemon juice with mint. As we sit, we notice that men are climbing up into the massive doorway to enter the Monastery. I couldn’t quite make the climb, but Tim did. Some Bedouins found a bit a shade and relaxed while others played little guitars and danced.

On the way back down, we took our time entering small caves and admiring the monuments again as the shift in the sunlight makes their colors striking in different shades of red-rose. 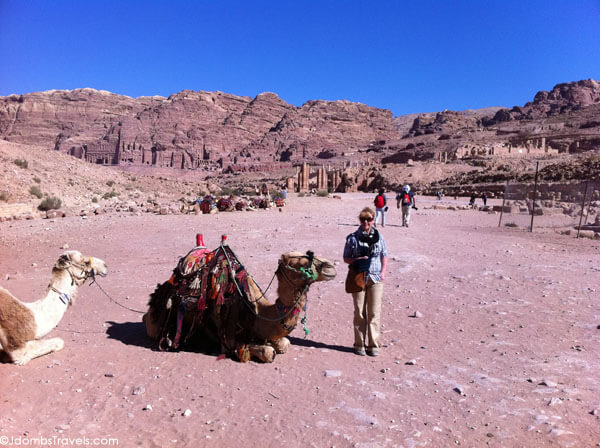 Just a word of advice: don’t get too close to the camels. This one almost chomped a bit of my arm as I jumped away just in the nick of time.