You are here: Home / Africa / Seychelles / 5 Reasons to Skip the Beach in Mahé, Seychelles If the Seychelles elicits images of swaying palm trees, sugar sand white beaches and turquoise water, you’re absolutely right. Having already checked the Maldives off our bucket list, we set our sights on the Seychelles for another dose of fiery sunsets and the most gorgeous, crystal clear water you’ve ever seen. But grouping these two Indian Ocean island nations together in similarity, like so many travelers do, couldn’t have been more off base. The Seychelles has far more to offer than relaxing on a beach. In fact, our recent visit has us singing the praises of these things to do in Mahé that will make you definitely want to skip the beach…for at least part of your Seychelles holiday. 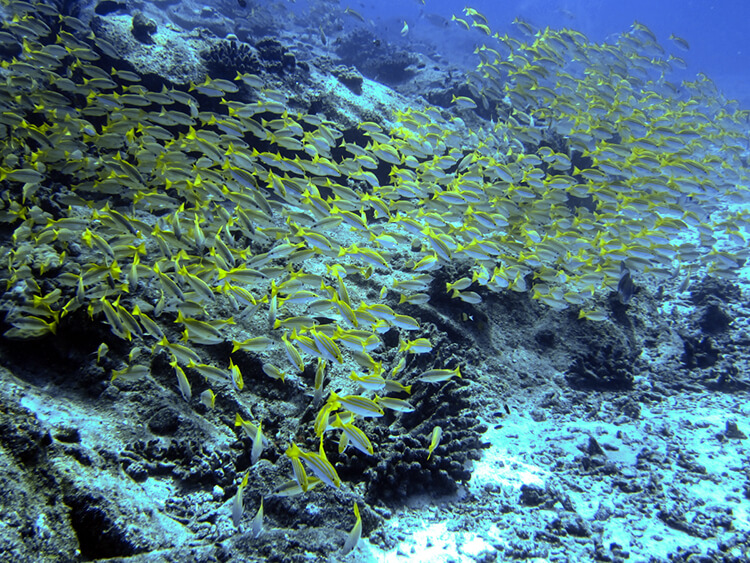 Surrounded by a school of bengal snapper

We have never, ever seen so many fish and such incredibly clear water.

Though we’ve only been diving for a year now, we’ve done our fair share of snorkeling around the world. Massive schools of bengal snapper would surround us. Moray eels popped their heads out of underwater caves between the granite rocks. Batfish that felt like they were at least half the size of me gently glided by. 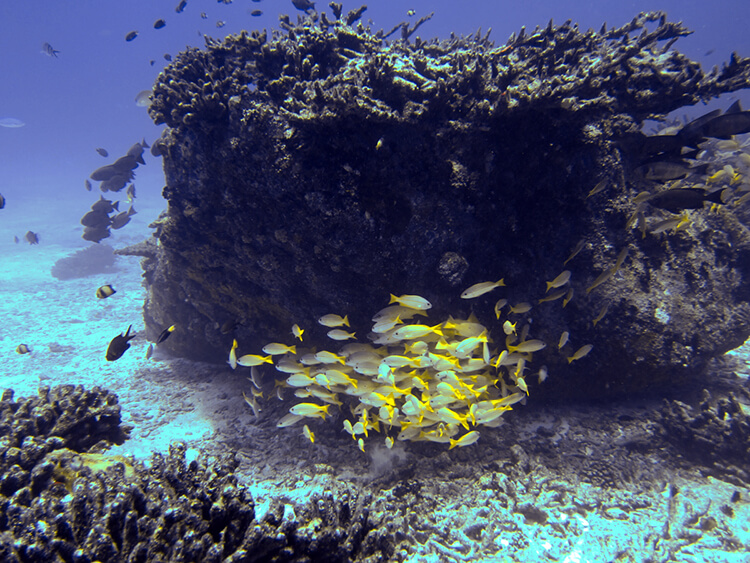 Brissare Rocks are rich with corals, sponges and granite rocks teeming with sealife 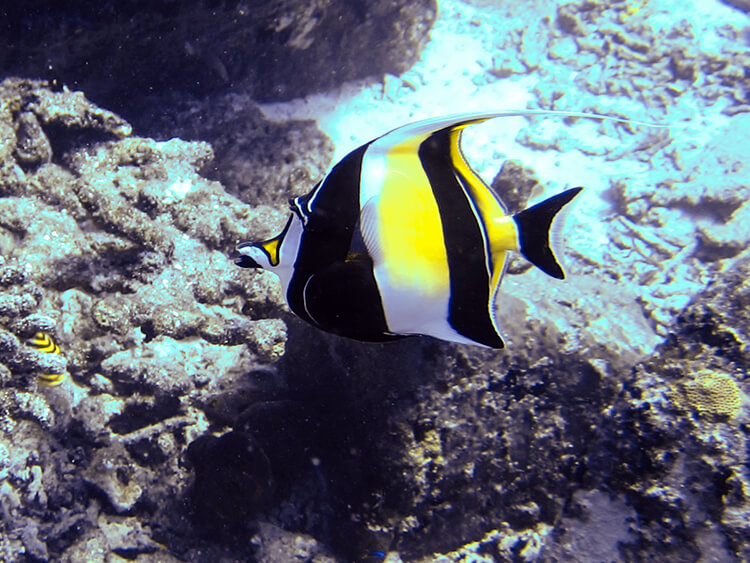 There was so much to look at under the water, we literally didn’t know where to look first. And though our dive boat was diving the very same site in three groups, we all came back from each dive with reports of seeing different types of sea life. It was truly spectacular diving and all just within a 15 minute boat ride from Beau Vallon, one of the most popular stretches of beach on Mahé. 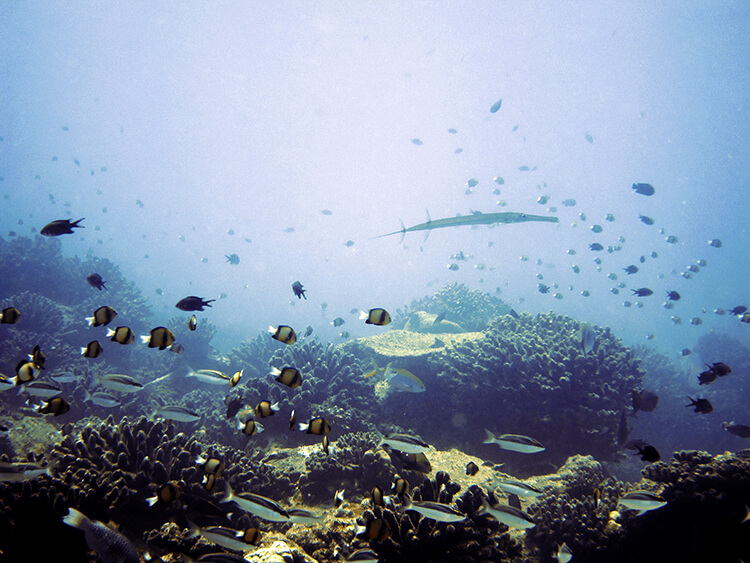 Big Blue Divers is a 5-star PADI dive shop that is family run and located right on Beau Vallon Bay. We highly recommend the two tank dive, which is not offered every day. Inquire via their request form online. Diving is best in October, November and March – May. 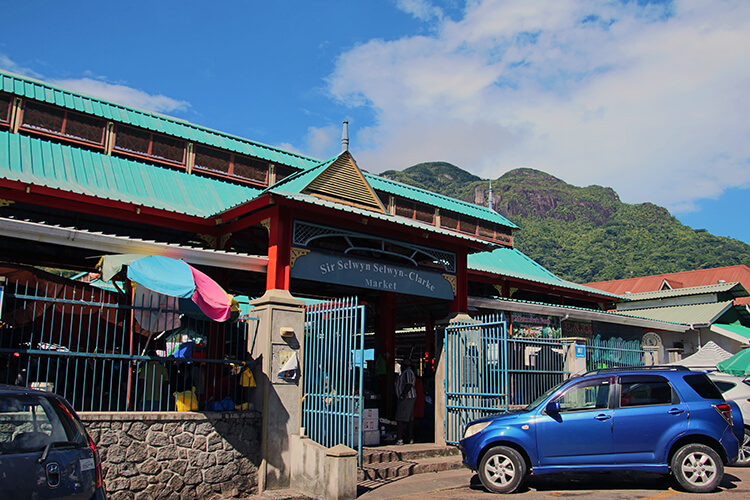 2. Visit One of the World’s Smallest Capital Cities

Victoria is the Seychelles main economic hub, the capital and one of the world’s smallest capital cities. It’s also home to about a third of the country’s total population, so as you might imagine, it’s always bustling with activity. You can really walk the center of Victoria in about an hour, but there’s quite a few sights to see. Not to be missed is the Clock Tower, nicknamed Little Ben because it is a replica of the Elizabeth Tower that houses Big Ben in London. It was built in 1903 to commemorate the Seychelles independence from Mauritius.

Since the Clock Tower is actually in the middle of a roundabout, I couldn’t help but joke with Tim with one of the famous lines from National Lampoon’s European Vacation. “Hey look kids, it’s Big Ben!” 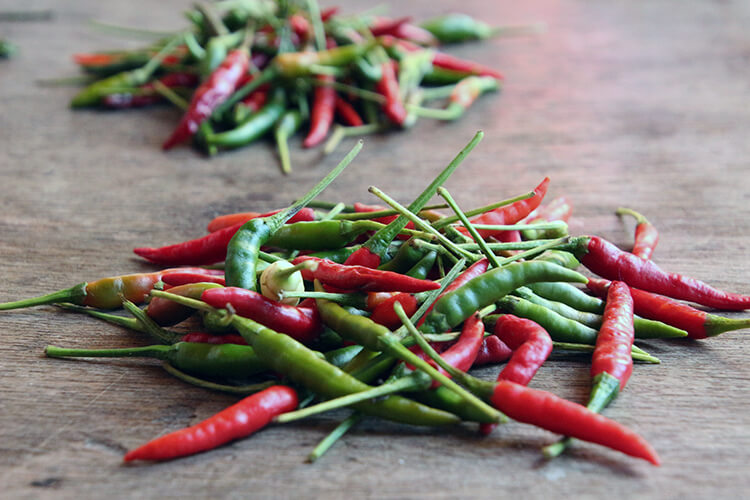 Chilies perfect for the Creole curries at the market in Victoria 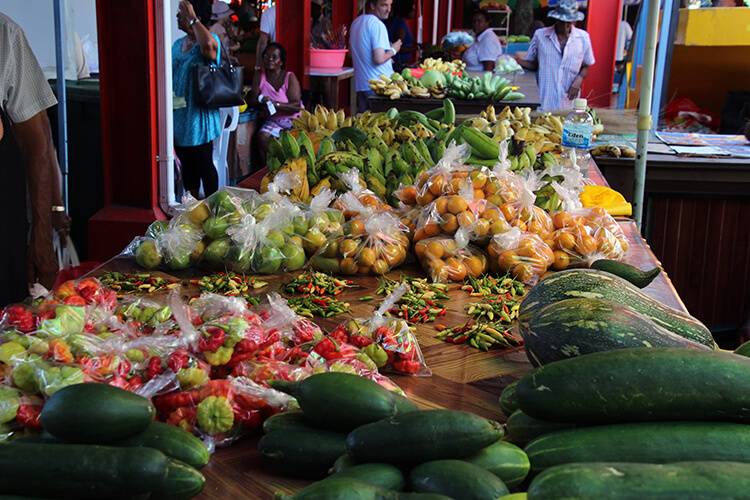 Everything from papayas to eggplants are sold at the market

You’ll find fresh fruit, veggies, fish, spices and tea at the Sir Selwyn Clark Market, which is open daily Monday through Saturday. But it’s Saturdays, when the market becomes the gathering places for many locals, that you truly feel the vibe of the market place as locals yell out their fish orders and the heads are chopped off the freshest catch. Walking down to the end of the Market Street, you’ll find the very colorful Arul Mihu Navasakthi Vinayagar Temple. It’s the first and only Hindu temple in the Seychelles, since the country is more than 90% Roman Catholic. It’s a working temple, though it is also open to the public. Stop by to have a look around at the temple, named after the Hindu god of safety and prosperity. 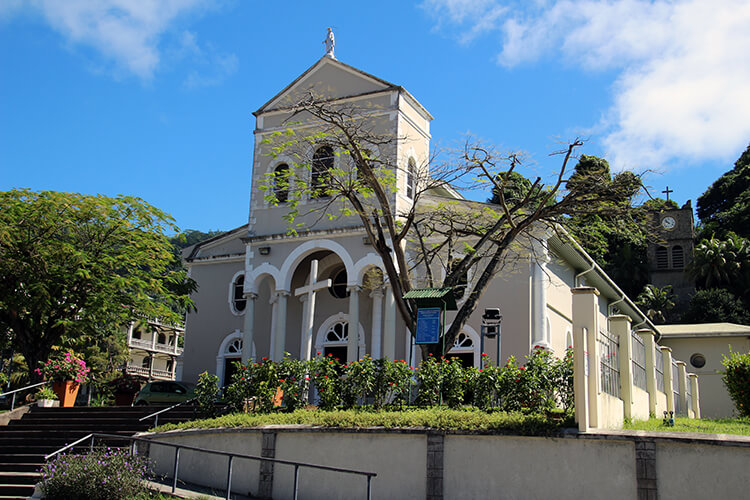 Wandering to the east of Market Street, the Immaculate Conception Cathedral is hard to miss. It’s the largest of several Catholic churches in Victoria and the sheer size demonstrates the importance of Roman Catholicism in the Seychelles. It’s also quite photogenic with it’s beautiful bell tower and lush surroundings. 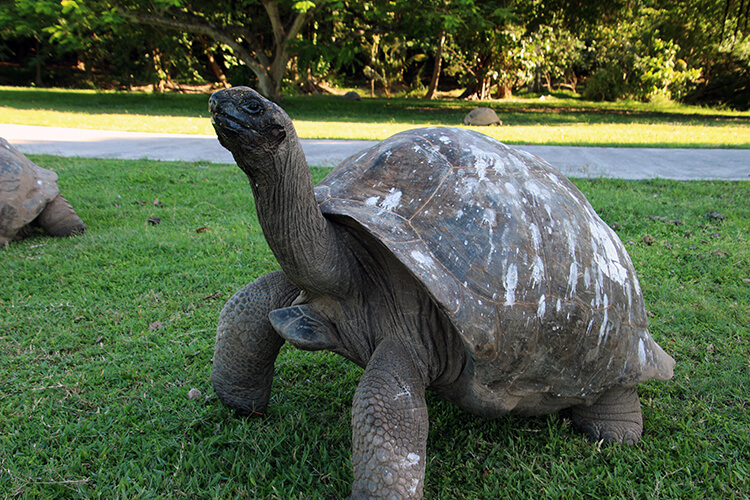 Another attraction that we just didn’t have time for is the Seychelles National Botanical Gardens. It takes about one hour to tour through the gardens, where you’ll find over 200 species of spices and plants, many of which can only be found in the botanical gardens. It’s also popular because it’s a place in Mahé to see and interact with a population of the giant Aldabra tortoises, which we spent several days with on Fregate Island Private. 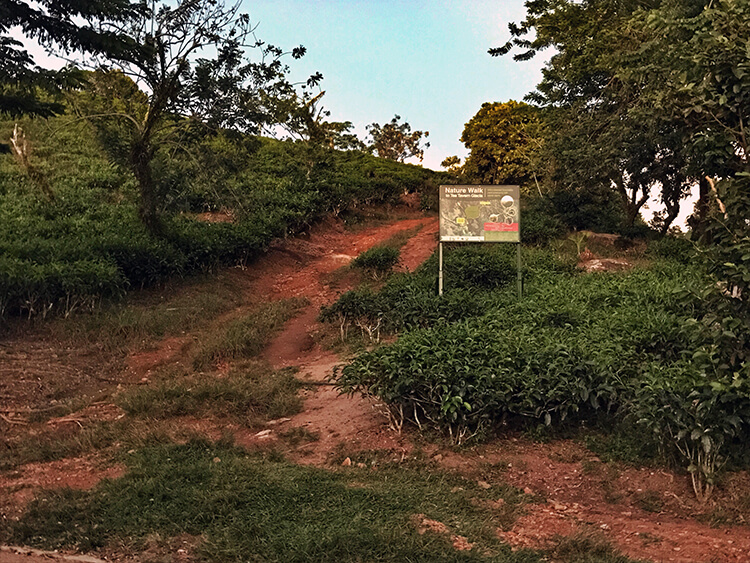 Hike to the Tea Tavern through the old tea plantation

3. Nature Walk to the Tea Tavern

There’s actually quite a lot of hiking trails on Mahé, though it can be quite hot with the steep climbs upward if you’re not used to the climate. One nice, easy trail takes you through the old tea plantations where you’re surrounded by tea and lemongrass. 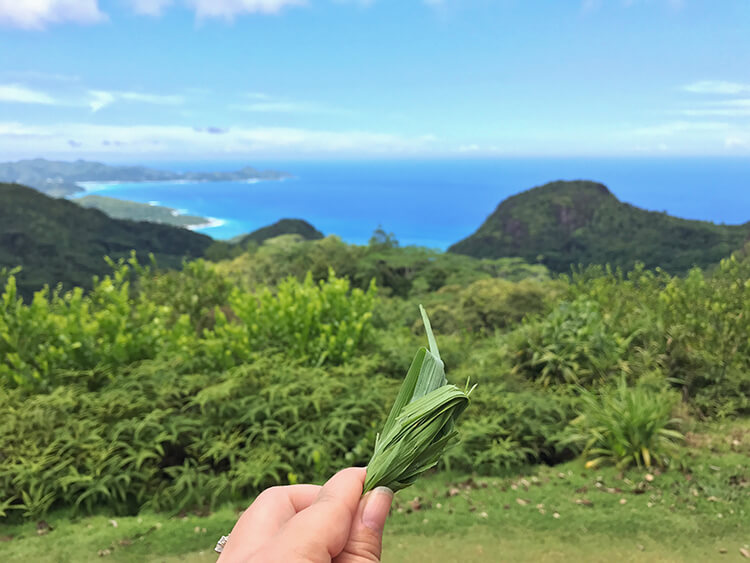 Fresh herbs and spices grow on Mahé, like this lemongrass

You can follow the nature trail to the Tea Tavern, which has newly been renovated after closing back in 2000. There are gorgeous views looking out over Mahé and you can buy some of the local vanilla, cinnamon or lemongrass tea made from handpicked tea leaves from the small shop.

The Tea Tavern Café is closed on Sundays and public holidays. 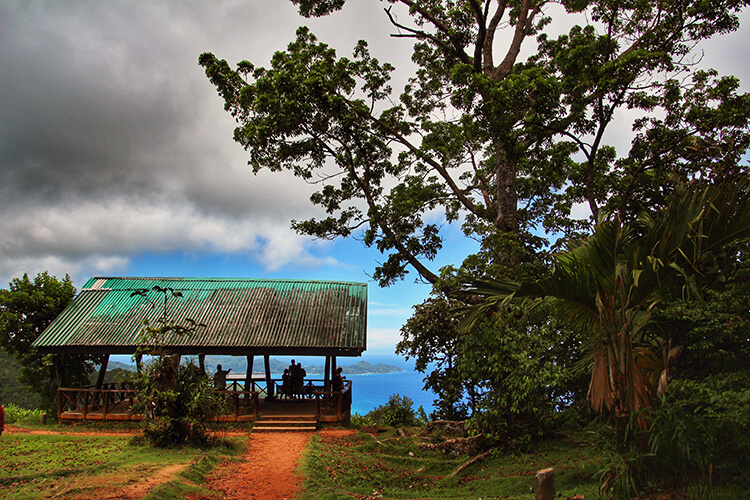 4.Take in the View from Mission Lodge

The most famous vantage point to take in breathtaking views of Mahé, Mission Lodge is also the most culturally and historically significant site in the Seychelles.

Slavery was abolished in the Seychelles in 1835, but it wasn’t until nearly 40 years later that the last of the slaves were liberated and Venn’s Town was established by the Church Missionary Society. It was 1876 and with the help of funds from abroad, a missionary school was opened to teach the children of liberated slaves. Halfway up the highest mountain on Mahé, it was located far from the main town, Victoria, in an area rich in biodiversity.

Unfortunately, the school was shut down in 1885 due to a lack of funds. 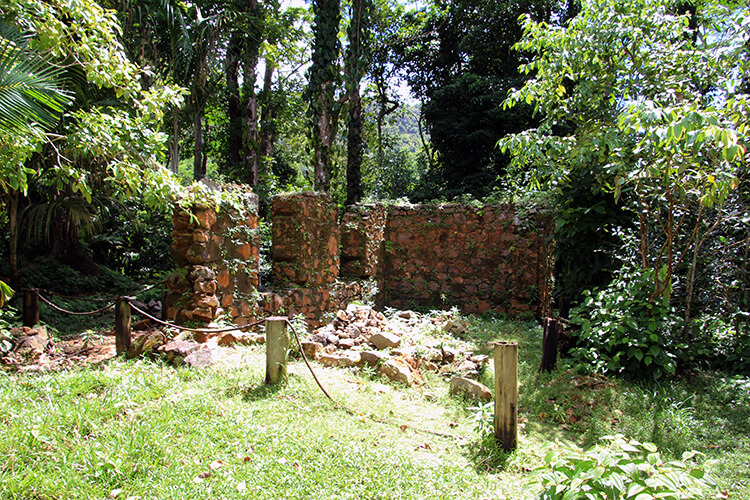 Today just some ruins remain, but H.R.M Queen Elizabeth II inaugurated the viewing lodge and enjoyed a cup of tea with one of the most spectacular views on Mahé in 1972. Mission Lodge and Venn’s Town is on the tentative list to become a UNESCO World Heritage Site.

After the Seychelles gained their independence, the area was designated as the Morne Seychellois National Park and includes Mission Lodge. You can find many endemic species of plants, wildlife like the world’s smallest frogs (the Sooglosus species) and bird life that are found no where else on Earth. 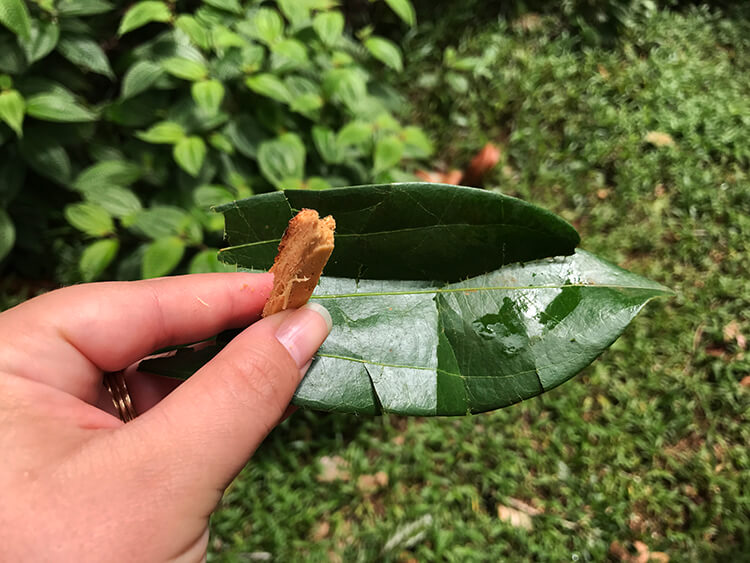 Cinnamon, we were surprised to learn, is so plentiful it’s actually an invasive species that has to be controlled. You’ll also find lemongrass and likely spot the orange-headed fruit bats hanging from the trees. If you’re incredibly lucky – we weren’t – you might also spot the critically endangered Seychelles scoops owl, one of the rarest birds on Earth. 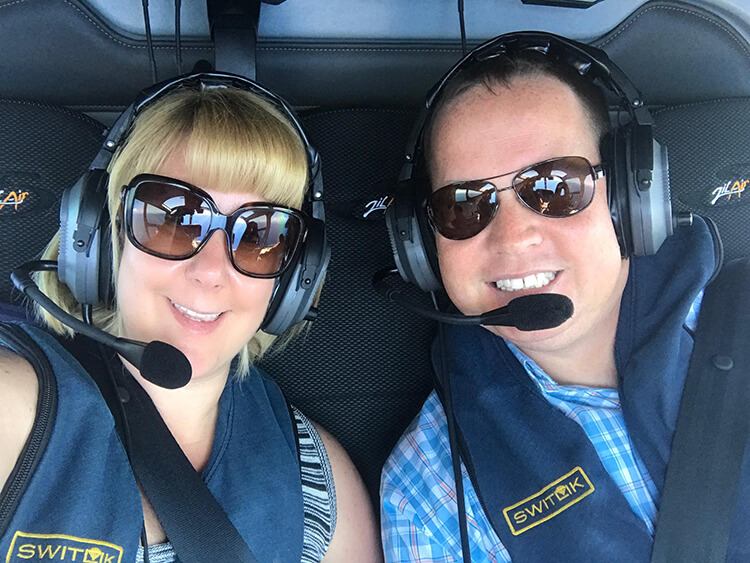 Me and Tim on a helicopter flight with ZilAir

One of the most beautiful ways to take in the beauty of Mahé is with a birds eye view on a scenic helicopter tour. From a helicopter, you can see how all the shades of blue blend into a rainbow of blue hues, the reefs and the lush forest.

We experienced our first helicopter flight in the Seychelles and though we’ve flown in a sea plane previously, this was so incredibly smooth. The pilot points out various sights and you can communicate with each other through the headsets. 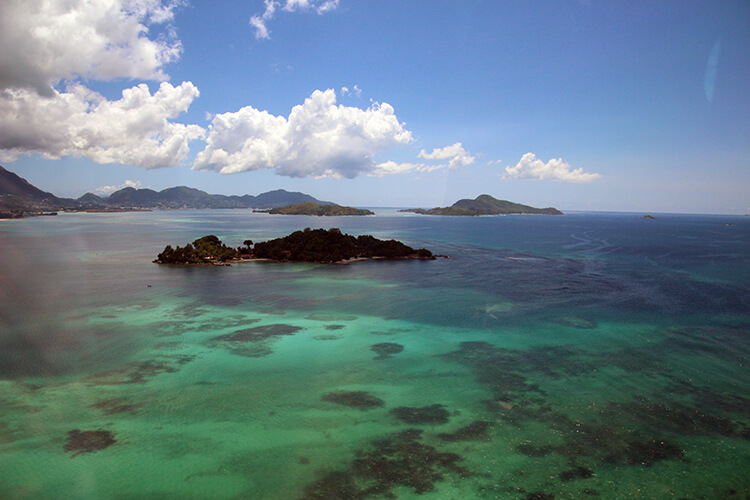 Getting a birds eye view of Mahé with ZilAir

There’s honestly not a more stylish or comfortable way for an island or multi-island tour. We certainly felt like rock stars while being awed by the beauty of the Seychelles from the air. 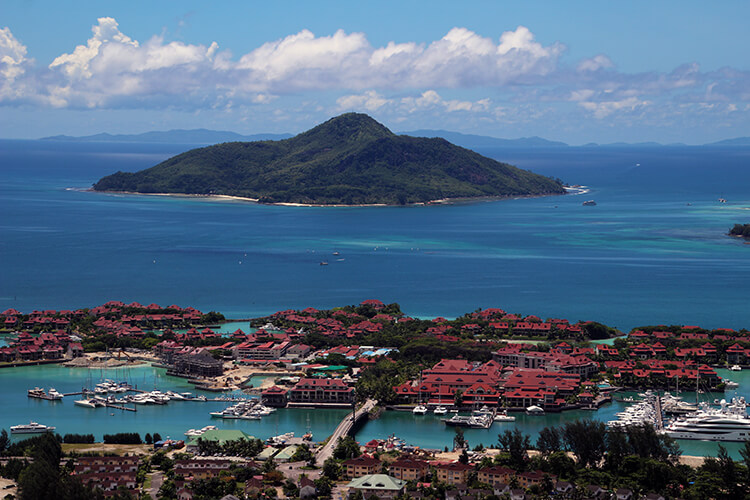 Eden Island is a man-made island with shops, restaurants, apartments, a marina and a hotel

Though not right on a beach, Eden Bleu Hotel on Eden Island makes for an excellent base for exploring Mahé. It’s just a couple minute drive from the capital, Victoria. Eden Island is also an incredibly popular place for the locals to hang out with shops, nightlife and good restaurants all within walking distance of the hotel. There’s also an onsite restaurant at the hotel.

The hotel offers affordable 4-star luxury with comfortable rooms, all with balconies and some with sea views. There’s also a complimentary beach shuttle multiple times daily to Beau Vallon or Anse Royale, two of Mahé’s most popular beaches with a variety of tourist services along them.

You can definitely stay at Eden Bleu and get away with not renting a car, though we highly recommend renting a car to properly explore Mahé.

For affordable 4-star luxury set on a beach, AVANI Seychelles Barbarons Resort & Spa fits the bill. It’s situated on a private stretch of beach just next door to Grand Anse. The resort has two on-site restaurants, one offering a buffet of Creole cuisine and the other a Thai restaurant.

There’s not much else close to AVANI, so a rental car is really necessary if you plan to explore Mahé. It’s also located on the other side of the mountain, so if you want to go in to Victoria or Eden Island for nightlife, the road is very dark, narrow and winding.