The O2 Arena is a London icon. Not only is The O2 the world’s busiest music arena, it’s also the second largest arena in the UK and one of the largest in all of Europe. The venue has played host to the most sought after musical stars including Bon Jovi, the first band to ever headline at The O2 and the first to play on the roof; Prince, who holds the record for the most shows performed in the arena at an astounding 21, and Miley Cyrus, who’s shows all sold out in record time. But the arena isn’t just famous for its bevvy of musical acts; The O2 has certainly had its 15 minutes of fame appearing in a number of television shows and movies. Perhaps most famously, it was featured in a sequence of the James Bond movie The World Is Not Enough, the scene culminating with James Bond rolling down the dome roof of the O2. I wouldn’t be rolling down the roof (hopefully), but I got my own Bond Girl experience climbing this London icon at Up at The O2! 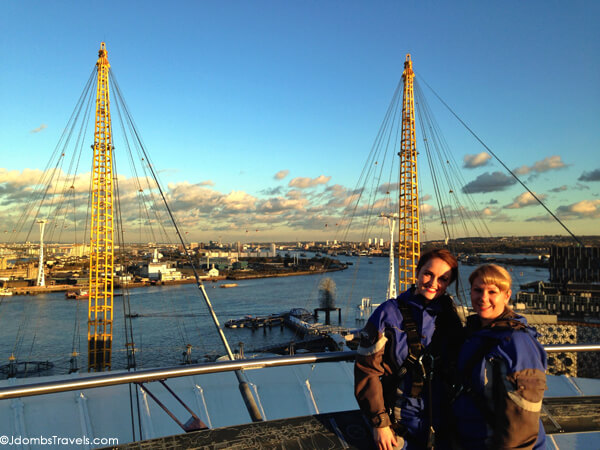 Get over it! We climbed The O2!

At “Base Camp” we were fitted with jump suits, proper shoes perfect for gripping the roof of The O2, harnesses, and a carabiner. Not exactly Bond Girl chic, but a little red lipstick can glam up even the most hideous of jumpsuits! Properly safety briefed, my friend Bree and I pose like Bond Girls for the cameras before we’re off and climbing the steep trampoline-like walkway toward the summit.

We’re clipped in the entire time with our carabiners and there’s no chance of falling. Though it looks like you could just slide right on down the 1 million square feet of the tent-like material roof. From this perspective, you realize just how huge The O2 is! Did you know that the Eiffel Tower laying on its side would fit right inside the O2? 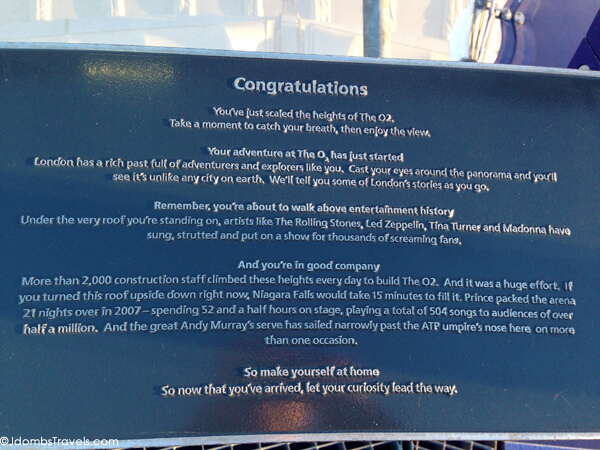 It would take Niagara Falls 15 minutes to fill up the roof of The O2!

Soon we reach the summit and the views are magnificent from Up at The O2! We’ve got a 360° panoramic view of London and it is all awash in golden hues as the sun gets ready to set. Directly below us spectators were cheering on their favorite tennis players in the world’s biggest indoor tennis tournament, completely unaware that two Bond Girl wannabes were scaling the roof over their heads at that very moment. We’d hardly drunk in enough of the spectacular views and it was time to descend. Leading our small pack of climbers, it looked like I was going to run right off The O2 into the Thames. Smiling ear to ear, I think to myself that the only way this could possibly be more fun is if there was a giant slide to whisk us to the ground again. I climbed, I conquered!

Thank you to  Visit Britain for hosting us for Up At The O2 in order for us to bring this story to you. As always, all opinions and decisions to scale buildings are entirely our own.