I was about to trust my life to some metal cables anchored to a cliff face high above the Ardeche River. I don’t have a fear of heights – I’ve flown a stunt plane and mastered a knee hang on the flying trapeze, after all – but I’d be lying if I didn’t admit that the opening scenes from Cliffhanger were flashing through my mind. I clipped my double carabiners to the cable and took my first steps. There was no turning back now; no chickening out of the Via Ferrata du Pont du Diable.

Via Ferrata is Italian for “Iron Road” and though not much translates literally when it comes to Italian, a Via Ferrata is literally a “road” made on mountains from fixed cables, ladders, and bridges. They were originally built to aid the Alpini, a branch of the Italian Army, in WWI to traverse the Dolomites. After the war, the via ferrata were maintained and became a popular attraction. Today the high-altitude adventure routes can be found in several European countries like Italy, Austria, Germany, Switzerland and France. There are even a handful now in the US and Canada. Anyone can climb a via ferrata with no experience, but I wouldn’t recommend it if you have a fear of heights. Each climber wears a harness with a pair of carabiners. A safety cable runs along and is bolted to the rock-face as you cross cables and climb up. It’s essentially aided climbing and as you come to the point where the cable is bolted to the rock, you must un-clip and clip on to the next section of cable. This is where the double carabiner, or Y-configuration, comes in to play. You un-clip only one at a time so that you are always connected to a safety cable. 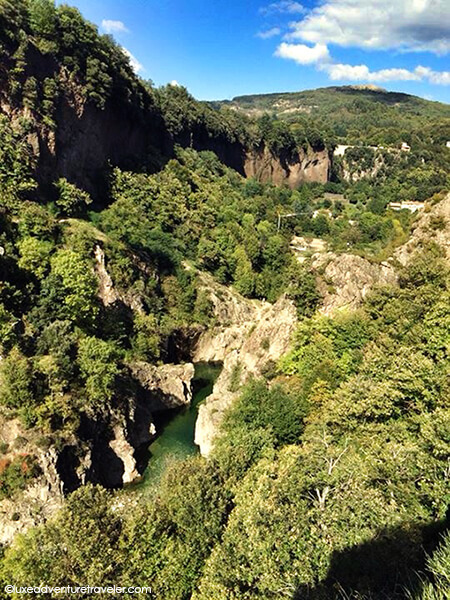 …but it sure is gorgeous if you do!

We got the hang of using the cables and carabiners on a small training section. And then we dove right in with crossing a high wire cable across a section.

Clank, clank, clank. It was the only sound as I inched my way across that first cable, the carabiners reassuringly clanking together with each step. I reached the other side and let out the breath that I’d been holding. 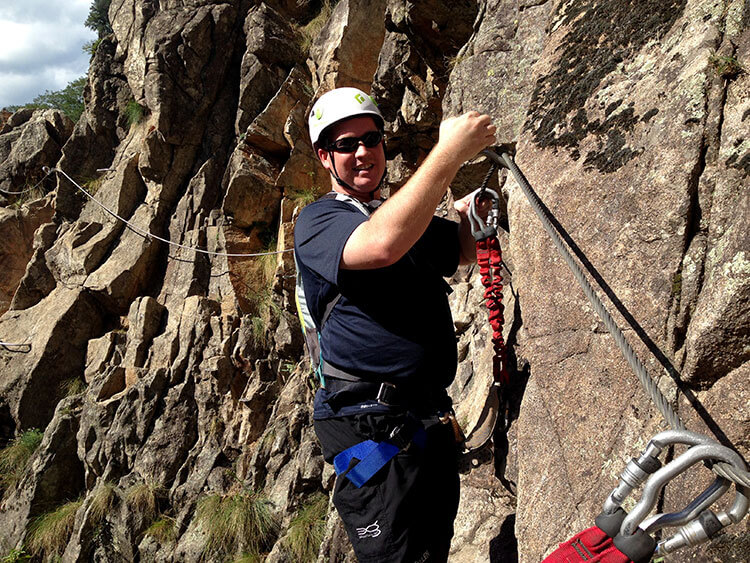 Tim was in his element A vertical section of the Via Ferrata du Pont du Diable 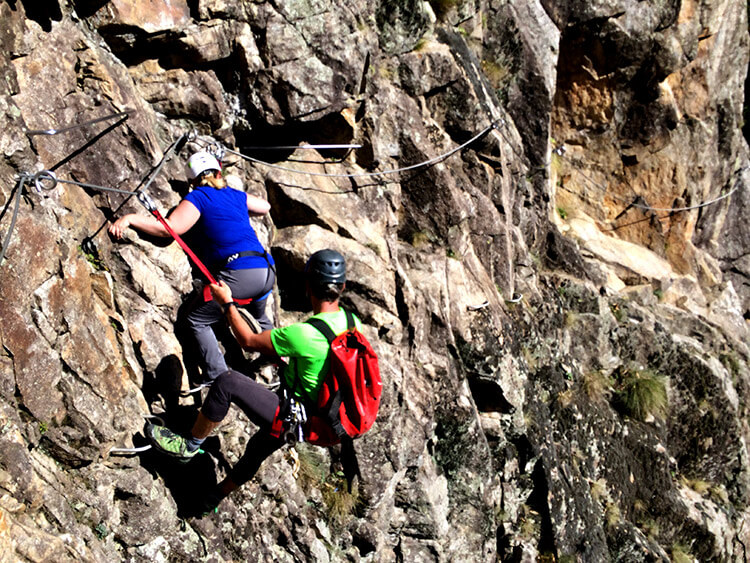 I, meanwhile, was clinging on for dear life

Each section was a different challenge. Some sections we’d simply have to make our way around corners; those were the easy sections. I’d even clip in my third safety clip and felt comfortable enough to pull out my iPhone and snap some photos. Other sections were a series of rungs spaced for climbing up a sheer vertical cliff face. Thankfully our instructor had the patience of a saint. I was leading the way and I’ve never ascended anything more than a 30-foot rock climbing wall…and that was years ago. Sometimes I’d misstep and have to move down before ascending again on a route that worked for me. The zipline carries you back across the gorge

After about an hour of climbing, we reached the zipline that would carry us each one by one across the Ardeche River. On the other side, we would have the option of an escape route that leads back to the car park or to continue on for about another hour of climbing on the “challenging” section.

Challenging section? What had I just climbed, then? (Officially, the route is marked a D on the via ferrata difficulty level scale, which means difficult and for those familiar with via ferrata.)

That was what was particularly great about this via ferrata in Ardèche, France – a first timer like me could challenge myself without getting in over my head and someone more experienced like Tim could continue on. I clipped my pulley on the cable and went soaring across the zipline, proud I’d just completed the section that I did. With shaking legs, I hiked back toward the car park while keeping an eye on Tim. He looked like an ant from my perspective down below. He said it was pretty difficult to take photos on the next section that he did, as sometimes the climb was nearly inverted. I definitely wasn’t quite ready for that, so I’m glad I chose the escape route. The via ferrata was definitely an awesome heart pumping adventure and we can’t wait to tackle some of the other ones at home in the Pyrenees now.

BookingGetting ThereTips
First timers may want to go with a guide from Geo Adventure as we did. The via ferrata including equipment is €40 per person.
Pont du Diable can be reached from Vallon in around 1 hour. We recommend staying at Hotel Berneron and renting a car to travel around the area.
Book Now
Equipment can also be hired if you would like to go on your own.

Our trip to Ardeche was in collaboration with Tourisme Ardeche. However, Luxe Adventure Traveler maintains full editorial control of the content published on this site. As always, all thoughts, opinions, and enthusiasm for travel are entirely our own. This article contains affiliate links. When you book on Booking.com through our affiliate site, we earn a small commission at no additional cost to you.