You are here: Home / Europe / Russia / 10 Fun Facts About Russia

Russia is a hard country to travel in. It’s one of the reasons we chose to go with G Adventures on their 8 day Golden Ring of Russia trip. For the first time, we were met with a true language barrier and a bit of culture shock. Things are just different in Russia. But for every frustrating moment we had, it was replaced by 3 amazing moments that would make us wonder what exactly we’d been frustrated over in the first place. Certainly traveling with our G Adventures CEO (Chief Experience Officer), Daria, made things worlds easier. Not only did she act as a translator, Daria shared story after story of what it was like to grow up in Russia. Short of carrying around a recorder, I’d never remember all she shared. But to kick off our time in Russia, we thought we’d share these 10 fun facts about Russia we learned from our time there: 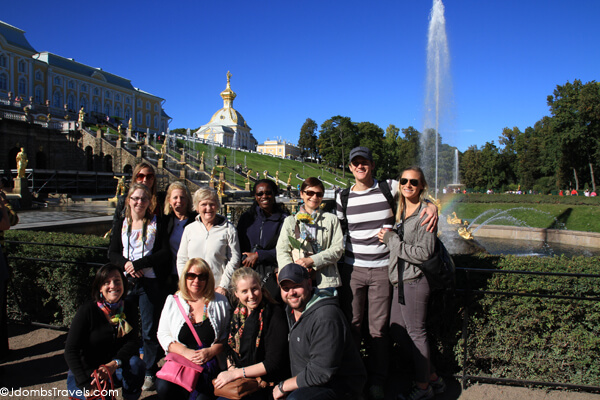 1. Moscow has more billionaires per capita than anywhere else in the world.

Russia’s capital boasts more billionaire residents than any other city in the world – 79 to be exact, according to Forbes. Even without Forbes confirming, it’s easy to believe since we spotted just about every make of luxury car including more Rolls Royce’s than we’d even seen in Monaco. 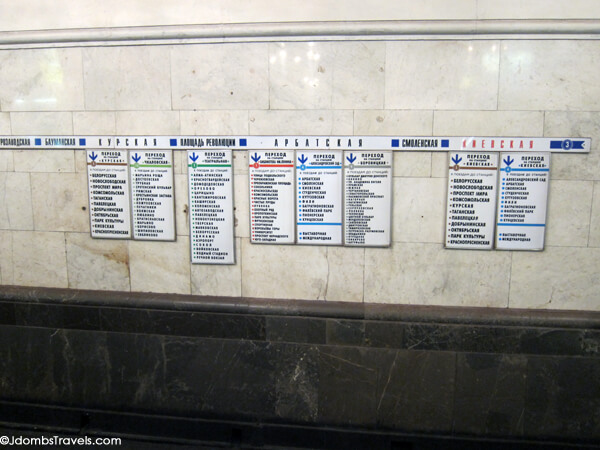 Loved these easy to use guides at each station!

2. Moscow has the 3rd busiest metro in the world.

Topping the list of the world’s busiest metros at number three, just behind Toyko and Seoul, there are 12 lines and more than 6 million people ride the Moscow Metro daily. Sound a bit intimidating? It was actually one of the easiest metros we’ve ever used and never had to wait more than 40 seconds between trains. There’s even a clock at each stop to time it! 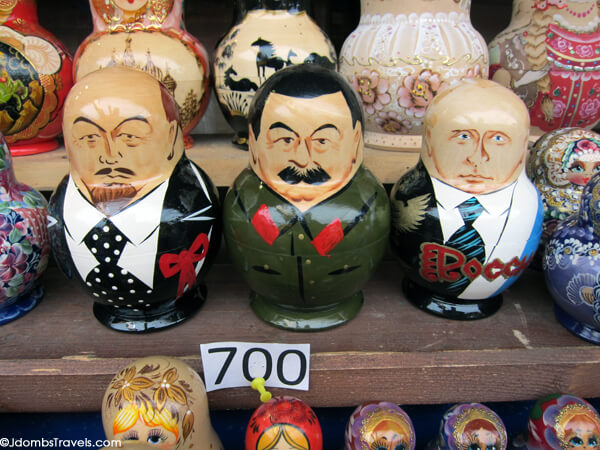 3. Russians are taught not to smile in school.

Russia regularly takes first place on lists of the World’s Least Friendly Countries. I personally think that Russians are just misunderstood. Our G Adventures CEO, Daria, told us that Russians are taught not to smile in school. And despite being met with scowls, most Russians were friendly and willing to help us translate or point us in the right direction when temporarily lost. 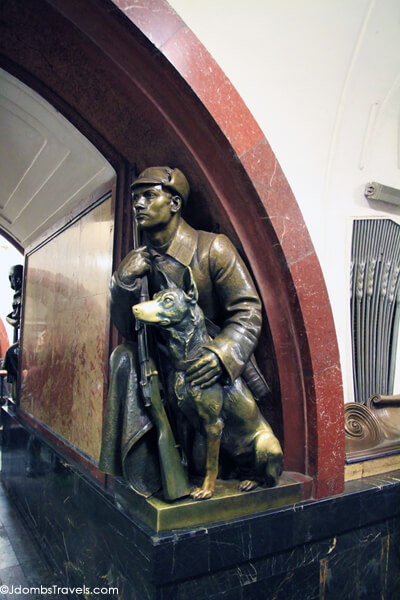 4. Russians have a lot of superstitions.

From rubbing a dog’s paw (but only with your left hand!) for money to making a wish if you could successfully toss a coin into Peter the Great’s boot, we learned about a lot of superstitions. But my favorite was how Russians selected where to build their homes in ancient times. Of course, it was a superstition that the first to enter a new house would die, so naturally they’d send a cat in first. They have nine lives after all! If the cat refused to enter, they’d tear down the structure and re-build somewhere else. 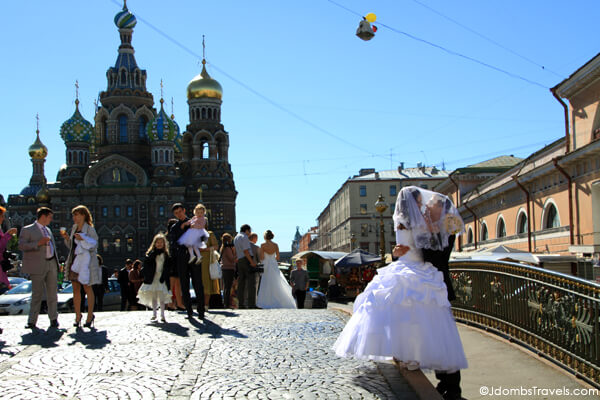 How many brides can you spot?

5. Russian brides go on a city tour after getting married.

I think we saw more Russian brides in 10 days traveling in Russia than I ever saw in 6 years of living in Las Vegas. We saw them posing in front of famous churches like St. Basil’s and Church of Our Savior on Spilled Blood, at parks, and even on boats along St. Petersburg’s canals. It’s tradition for a newly married couple to go on a city tour immediately following the ceremony. 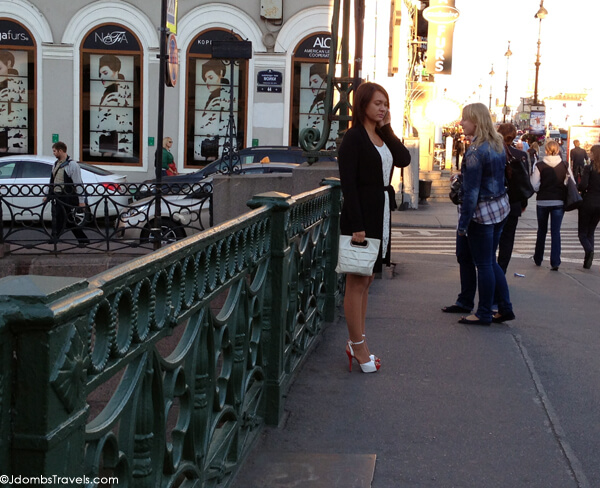 She walked for blocks in those shoes!

6. Russian women really do walk around in 6-inch heels.

Russia = the land of fabulous shoes. And Russian women never failed to amaze me as they traversed the cobbled streets in 6-inch stilettos, never faltering. Perhaps all the vodka numbs the feet? 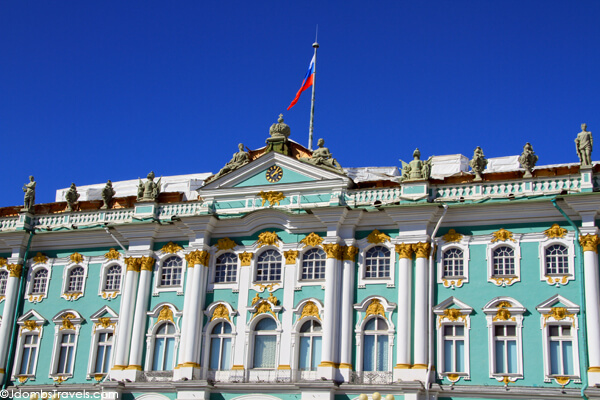 One building of the beautifully ornate Hermitage

7. If you spent 2 minutes looking at each exhibit in the Hermitage, it would take you 6 years to see everything.

The Hermitage is huge. Massive. Comprised of six buildings, there are over 3 million exhibits inside. It’s also one of the largest and oldest museums in the world and was founded by Catherine the Great in 1764. 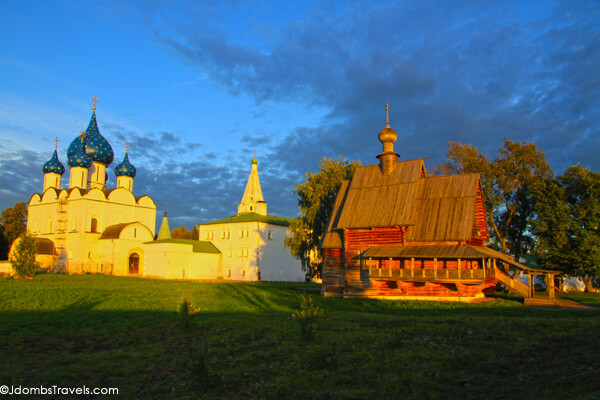 Kremlin and the wooden Church of St. Nicholas

8. The village of Suzdal is only 15 square kilometers but has an incredible 53 churches.

Suzdal is full of picturesque charm. Even though the population is now over 10,000, it retains its small village feel and charm. There is a beautiful juxtaposition between Russian architecture and farmland. The sun had broke through the clouds just in time for sunset and we literally frolicked in a meadow as the golden sun illuminated the Kremlin and wooden church of St. Nicholas. 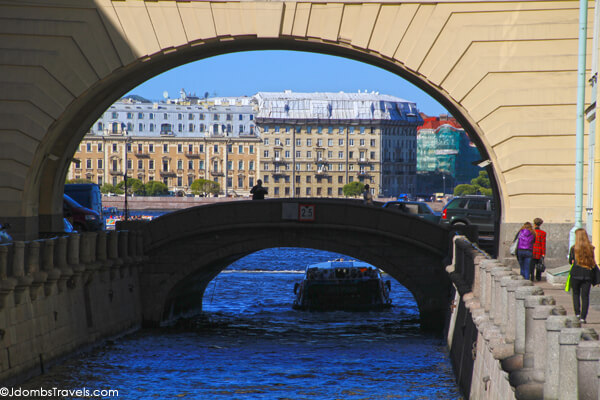 Standing on a bridge, taking a photo of a bridge

9. St. Petersburg has three times as many bridges as Venice.

Many cities – Bruges, Amsterdam, and Hamburg, to name a few – are all dubbed the “Venice of the North”. St. Petersburg is also on that list, and dare I say, is much more romantic than Venice itself. We had sunny days and the golden hour before sunset was our favorite time to wander the city. We’d pause on some of the city’s over 1000 bridges that cross the canals to watch golden onion domes glisten and spires sparkle.

10. The Trans-Siberian Railway crosses 8 time zones, goes through 87 cities and towns, and crosses 16 rivers including the Volga.

Recognized by the Guinness Book of World Records as the longest single railway in the world, we only traversed a teeny-tiny part on an overnight train journey from Yaroslavl to St. Petersburg. But hey, we were on the Trans-Siberian Railway!

Over the next few weeks, we’ll be sharing everything from our trip to Russia. I hope you enjoyed this teaser!