You are here: Home / Travel Tips / Why I Don’t Like Airbnb

Sorry, but I just can’t get into this Airbnb craze. On occasion I don’t mind renting an apartment with Tim or a friend; I’ve actually written about several that we loved like this one in Berlin and this one in Split. But in general I like the amenities of a hotel stay when I’m traveling and just don’t find the majority of apartment rentals all that convenient. I also have a lot of concerns about the various safety aspects. I’m not saying you shouldn’t ever use Airbnb, but it’s not for me. Hear me out on why I don’t like Airbnb… 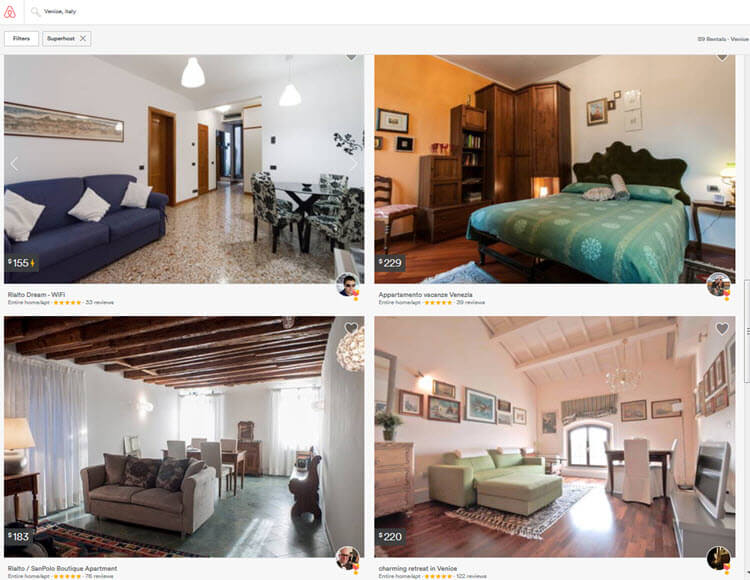 Here’s where I’m going to hate on Airbnb as opposed to all holiday apartments in general. I don’t like Airbnb’s lack of quality checks and that they aren’t subject to any of the inspections that keep hotels from being death and fire traps.

First, no matter how many reviews you read, you’re kidding yourself if you think people don’t game the system and post fake reviews. And for the ones that aren’t fake, well, one man’s castle is another’s dungeon. How do you really know what you’re getting?

Like so many things, the right angle and a little Photoshop can make a photo look entirely different than the reality. I stayed in a (as advertised) luxury holiday apartment in London where lovely artwork was hung on the walls to make the apartment look chic and upscale; in reality it was a dump and not a single piece of art from the photos was actually in the apartment.

Second, even if you aren’t renting from a psychopath (or just generally creepy man), there are loads of other safety issues to take into consideration.

Apartment rentals don’t typically provide a safe to store your valuables while you’re out and about. I’ve personally known one too many holiday apartment renters that have had laptops, expensive camera gear and passports stolen from their holiday apartment. Sure, theft can and does happen at hotels too but it’s your own fault for not securing valuables. At an apartment, you’re vulnerable.

And does it concern anyone else that God only knows who has keys to the apartment you’re staying in? Perhaps I’ve watched one too many episodes of CSI, but think about it. What’s to stop a crazy from renting an apartment, heading to the nearest hardware store and making a copy of the key? They can enter whenever they please. Maybe that’s what happened to this still unidentified woman who was found decomposing this a Parisan Airbnb rental’s backyard; who knows since it’s still under investigation.

And it doesn’t even need to be a wayward criminal. It could be the host, like in this incident with Jacob Lopez in which he claims his host locked him in the apartment he was renting in Madrid and sexually assaulted him.

I’ve stayed in too many apartments that only had a single lock. I always deadbolt my hotel room door.

I also much prefer the electronic keycard locks since the majority of them change the combination with each new guest. There’s little chance of other key cards floating around that will open your room. I’ve never seen an electronic keycard door lock on a holiday apartment rental.

I could go on, but you get my gist on safety issues.

2. Check-in and Check-out Can Be a Pain

With the majority of hotels, reception is open 24/7. You just show up whenever and someone is available to check you in or out.

When it comes to the majority of holiday apartments, these are rented by individual owners who you have to arrange to meet. I can remember renting an apartment in Berlin and the owner being downright pissed off that I wasn’t there at 3pm, or whatever time we arranged to meet, on the dot.

I have zero control over delayed flights, how fast the taxi can get me there in traffic and a myriad of other things that just go wrong when you’re traveling.

I don’t know about you, but rarely do our flights conveniently line up with checkout time. We often pack-up, checkout and store our luggage in the hotel’s luggage room while still having at least a few hours to explore before we head off to the airport.

Holiday apartments simply don’t offer this convenience and not every destination has a nearby train station with luggage storage services. This one isn’t necessarily a holiday apartment deal breaker, but it is something to take into consideration when planning your holiday.

4. I Don’t Really Want to Cook on My Holiday

Hell, I don’t want to cook every night when I’m home. So why would I want to cook on my vacation? In short, I don’t (unless I’m doing a really fun cooking class like learning to make macarons in Paris).

Look, I get that food can be one of the biggest expenses you have when traveling. Three meals a day adds up, especially if you’re feeding a family. There’s appeal in being able to spend less at the grocery store and save by cooking some meals in.

By booking a hotel with breakfast included, one meal is already taken care of daily on your trip. And where I might grab a yogurt at home, I enjoy indulging in delicious breakfast dishes I would never take the time to cook for myself like eggs benedict.

5. Lack of Amenities and Customer Service

The lack of all the extras, like a gym, spa, onsite restaurant, room service and toiletries are what make holiday apartment rentals so inexpensive.

I wake up cranky and that can set the tone for my entire day when I have to sleep on a pillow that’s the equivalent of sleeping on a rock. I like having pillow menus available to find a pillow that gives me a comfortable night’s rest.

And let’s face it. The majority of holiday apartments are furnished as cheaply as possible. I have yet to see one with a mattress that envelopes you in what sleeping on a cloud must feel like.

But the biggest missing amenity in holiday apartments is customer service and the ability to move you to another room when problems arise. I thought sleeping on a rock hard pillow was bad…until I stayed in another apartment in London in winter with a broken hot water heater.

I stayed in that apartment for seven nights because no others were available to move to and the company refused to pay for a hotel. We didn’t have heat or a hot shower for our entire stay. Worst of all, the apartment owner wanted me to sit around waiting for the plumber to come for hours at a time.

I was there to speak at a conference. I needed a hot shower and I certainly didn’t have time to sit around waiting for a plumber from 1pm – 4pm. Would you want to do that on your vacation? Probably not since you paid to, you know, go see London!

The press loves to say Airbnb is taking over the world and the sharing economy is all the rage these days. But I’m not convinced. At the end of the day, I’ll still pick a hotel over a holiday apartment rental and I’m sure I’m not the only one.

All of that said, if a holiday apartment or vacation home rental really is the best fit for you, be aware that are many other options out there. There are Airbnb alternatives like holiday apartments that operate as a business with a reception, competitors like onefinestay that personally vet every single listing on their site by staff personally staying in the place, and other sites like Airbnb such as Homeaway and Flipkey.