“Time goes by so slowly when you’re a child, and then, as an adult, it goes by in the blink of an eye.” – David Lowery

As adults, we’re always going, going, going. There’s a million and one things to do, and never enough hours in the day to do them all. I’ve never been very good at finding balance between what needs to get done and finding time for myself.

I’m trying to be better at that though. To take more walks just because, which I had basically stopped doing after Emma passed away. To say yes whenever friends call, even though I’m exhausted and just want to hibernate at home. To step away from the computer and technology, even for an hour or two a day. To just be kinder to myself. Posing with a group of readers at the pier in Arcachon

We love that this site inspires people to visit places, go on tours and do things because you found out about it here. But so often, we never get so much as a thank you in response to the emails we take time out of our day to send lengthy responses to with additional information.

It kind of sucks, to be honest.

I was recently reminded why we do what we do though, and why it matters.

I got to meet a foursome from Florida, who love oysters and wine. It was Whitney, the gal next to me in the photo above, who read about this private cruise with oysters and wine tasting on our site. Whitney had been dreaming about doing the boat cruise since reading about it and she and her family planned a night in Arcachon just so they could do the wine tasting cruise.

I was invited along. It made my week to see how much they loved their time exploring the Bassin of Arcachon on the boat, tasting our wonderful oysters and learning about Bordeaux wines. Whitney’s aunt, who was adamant she doesn’t even like oysters, ended up eating five!

Whitney told me they never would have known about this private cruise had it not been for this blog.

I’m certain they had a memorable day. And I’m thrilled to have been a part of making their trip to Bordeaux special.

Wondering why all the trips to England stopped? No, there’s no romantic troubles. Tim is just deployed again, so I won’t be seeing him for a few months.

On one hand, yet another stretch of several months apart royally sucks. The good news is that this should be his last deployment ever. He’s now less than a year away from retirement and moving to Bordeaux.

We’ve both basically been counting down for the last few years and we’re finally in the home stretch. 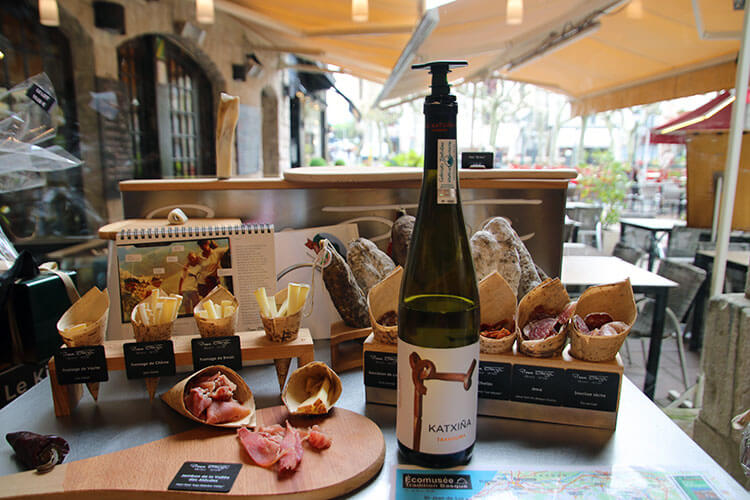 Stop in to Pierre Oteiza to taste the selection of hams, sauccison and cheeses

Apparently y’all love to eat good food as much as I do, because everyone was pretty excited about the do-it-yourself food tour of Saint-Jean-de-Luz I put together after my visit. And if you visit in summer, there’s a nice beach that curves around the entire bay there where you can swim off all of the calories from the sauccison, macarons and gâteaux basque that you’ll be sure to eat during your trip.

I worked off any calories I consumed with surf lessons and hiking in the hinterland. You can bet I’ll be back in Pays Basque exploring more, because I fell in love.

It’s really no surprise that this epic sunset during my trip to Biarritz was my post popular Instagram photo in April. Who doesn’t love a good sunset?

Bordeaux has a lot of stunning sunsets in the summertime, so I can imagine Biarritz dishes up its fair share of them too. April is En Primeur in Bordeaux, a historic event that traditionally happens each year. As a writer and ambassador of Bordeaux, I get to attend with other wine writers and industry to taste the 2017 vintage. The wine is no where near ready, so what’s the point? En Primeur these days gives the wine world first impressions of how the most recent vintage is and merchants still do buy during this event.

Some wine writers, like James Suckling, taste over 700 different Bordeaux wines from the various châteaux. I never rack up near that number, but usually attend for 2-3 days and taste around 30 wines each day.

So what did I think of the 2017 vintage? Considering that a really early and warm spring had caused the bud break on the vines by the end of March, then a severe frost left some châteaux devastated and the summer was rainier than usual, the vintage turned out good.

When I tasted 2016 during En Primeur last year, nearly every single châteaux had produced a wine I wanted to drink already. The aromas were prominent. The flavors popped. The wines were really well balanced. It was truly an exceptional vintage that could rival the vintages of 2009 and 2010.

Aside from En Primeur, I tried Kadarka Tonkovic Fantazija 2011, a Serbian red wine that I really enjoyed. Interestingly, I had it here in Bordeaux even!

I also attended the Open Doors of the Médoc, where various châteaux open their doors over a weekend and have free tastings and events for visitors. It’s mainly attended by us locals, but would be a great time to plan your trip to Bordeaux and visit many châteaux for free. I only made it to three châteaux this year: Château Lascombes where I tasted their 2012 Château Lascombes Grand Cru Classé and their second wine 2011 Chevalier de Lascombes Margaux; Château Marquis de Terme; and Château Dauzac where I did their wine and chocolate workshop.

By the time I got to Biarritz for my trip around Pays Basque, I was a bit wined out. I often opted for sangria or Pays Basque cider, but my meal at the 1-star Micheline L’Auberge Basque was accompanied by a wine pairing with each course. I tried a 2016 Tauzy Jurancon Sec, 2014 Le Village Côte-Rôtie and a 2016 Domaine Les Mille Vignes Cadette.

Then I was invited to join a foursome of our readers on their private Arcachon wine tasting cruise, where I tried a 2016 Château de Rouillac, a 2017 Château Boutinet Clairet de Bordeaux, a 2012 Château Guibot La Fourvieille and a 2012 Château des Mailles Cuvée Laurence.

I also visited Château Coutet Barsac to try out their new Sauternes and Jellies workshop, where I tried a 2016 vintage that will soon be bottled this June, a 2010 and a 1989. I’m currently in Oman, where I’m traveling for a full two weeks. The trip was originally supposed to be three weeks, but part of it was cancelled. Since I’ve been on the go for basically months now, I decided to cut it short and booked a new earlier flight home.

I was originally due to attend my visa renewal appointment the day after I got home, and with returning early I don’t have nearly as much stress over being ready for that appointment now either.