Did you know Montana is number two in the good ‘ol US of A for the most craft breweries per capita, just behind Vermont? I didn’t either until I road tripped from Missoula to Whitefish recently and discovered Montanans wear their beer-loving status as a badge of honor. There’s a brewery in nearly every town and an incredible 14 breweries between Missoula and the Flathead Valley in Western Montana’s Glacier Country, including the wonderful 10-barrel Kalispell Brewing Company. They’re brewing something just about everywhere in Montana

Normally I’m a wine always, spirits sometimes kind of gal, but lately I’ve been opening my palette to beer on occasion like the Red Donkey in Santorini, some delicious craft brews we tried on a Ljubljana food tour and the bock beer in Regensburg. And after trying some local Montana wines, I honestly think wine making should be left to the nearby Oregonians.

Montana’s long winters aren’t the best conditions for grape growing, but the state is a leader in wheat and barley growing, Glacier National Park’s 25 active glaciers produce clear glacial waters and the majority of the US’ hops production comes from the Pacific Northwest. It’s an equation for award-winning brews. 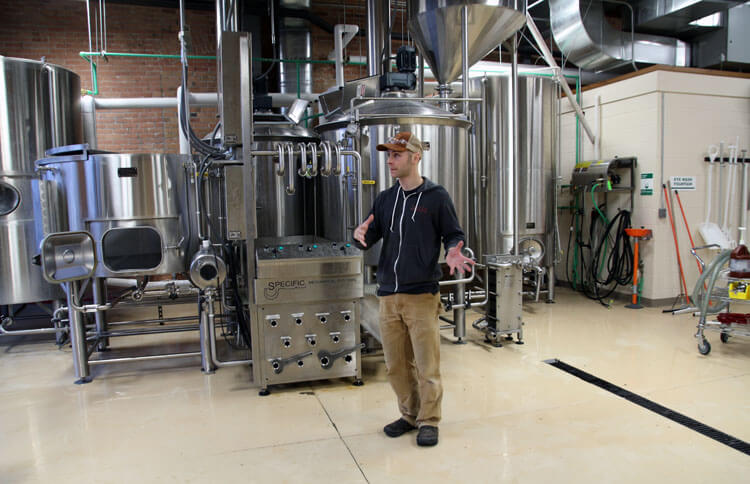 I got the chance to meet and talk with Cole, owner of Kalispell Brewing Company, when I visited his brewery on my Montana road trip. When I asked him how he got started, Cole told me that it was over a decade ago that he decided to brew his own beer at home. “It was terrible,” he told me with a chuckle.

It’s a good thing he didn’t give up, because the master brewer now owns the 10-barrel brewery and tasting room in the Flathead Valley. And anyone that can make beer taste like bacon is a success in my book.

Yes, BACON. It’s a seasonal beer called Life’s a Beech Rauchbier, which is a smoked lager (smoked in beechwood, hence the clever name) that really does come out tasting like bacon in a glass. Cole told me it’s his favorite and after a glass in my tasting flight, it was mine too. My tasting flight included four beers of my choosing from Kalispell Brewing Company’s regular and seasonal brews. As you already know from my raving about bacon, I chose the Life’s a Beech Rauchbier. I also picked Winter at Noon Dunkel, another dark lager that promised a slight sweet taste; the seasonal Old Sun XPA, an extra pale ale; and finished out the flight with Broken Tine Barley Wine.

Still trying to make some sort of Montana wine work for me, the barley wine (actually a beer since it is brewed from grains, the name wine comes from the alcohol content that is brewed to 10%) was the only thing I wasn’t really a fan of.

Aside from the delicious craft brews, I could totally see why the tasting room was hopping at 4pm on a Thursday. Because Kalispell Brewing Company operates as a tasting room, kids are allowed and can enjoy the fresh popcorn and their own beers – of the ginger and root variety, that is. There’s live music and a fun environment. On Wednesdays, you even get a free beer while you wait for your growler to be filled. And in summertime, you can enjoy the rooftop patio with views to the Swan Mountains (well, so I hear since they were hidden by the threatening snow clouds while I was visiting Kalispell).

But Kalispell Brewing Company is only open until 8pm and never on Sundays. Say what?

Another thing I learned while touring the Treasure State is that Montana liquor licenses are a tricky thing going back to when Prohibition ended. Montana enacted a quota system in 1947 and now liquor licenses are virtually impossible to get since the state feels they have an excess. Unless you have a spare $500,000 lying around to snag a liquor license on the open market…

My trip was provided by Glacier Country Montana in order to bring you this story. However, Luxe Adventure Traveler maintains full editorial control of the content published on this site. As always, all thoughts, opinions, and enthusiasm for travel are entirely our own.