For several days, we went to bed and woke up to high winds. “Most unusual at this time of year!” just about any local would tell me as I asked about the wind. Tim and I were scheduled to go sea kayaking on our last day, weather permitting of course, and I feared it would be cancelled because of the winds. Unfortunately, the winds kept up and we couldn’t do our original program to cross the Caldera from Oia and kayak across to the island opposite Santorini, Thirasia, where we were to have a picnic and watch our last sunset. But we weren’t left too disappointed, the conditions were good enough to go sea kayaking Santorini’s south coast. We’d be visiting beaches only accessible by boat and kayaking among rocks rising out of the sea. 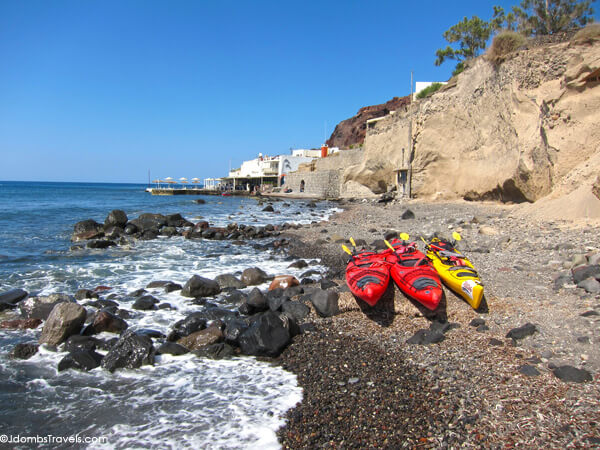 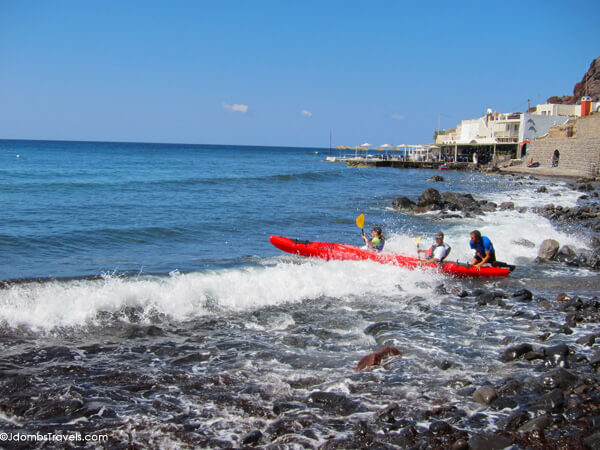 Our small group of adventure travelers got a lesson on paddling technique and then it was time to get geared up. Tim and I had sea kayaked previously in San Diego, but it was hop in and go. For our 7 mile adventure to the deserted black sand Kambia beach, Tim would be manning our rudder with pedal power. To keep the water out of our kayak, we were each suited up with spray skirts. Each kayaker wears the skirts, which fit comfortably with suspenders and then cinch around your waist. Once seated in the kayak, the spray skirts are fitted around the kayak’s cockpit. 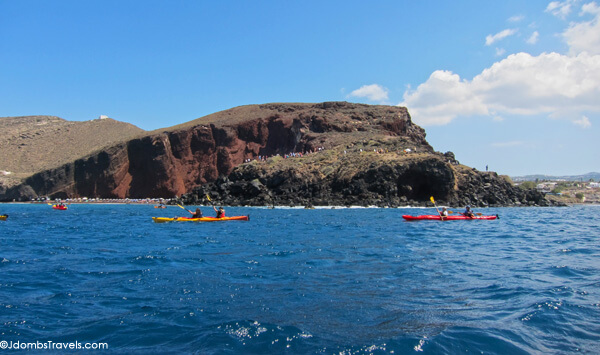 See all the people hiking to Red Beach? 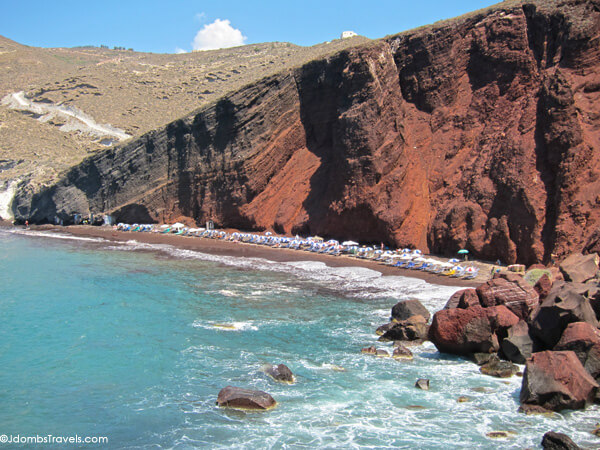 Our guides timed the waves crashing into shore and gave a big shove, flipping down our tail rudder, and yelling for each kayak team to paddle! Bobbing, we each mastered turning and were off toward the Red Beach. It takes it name for the iron-rich sedimentary rocks towering above and around the beach and the red sand. Red Beach actually can be reached by foot along a very rocky trail and plenty of people make the 20 minute hike as it is always crowded. 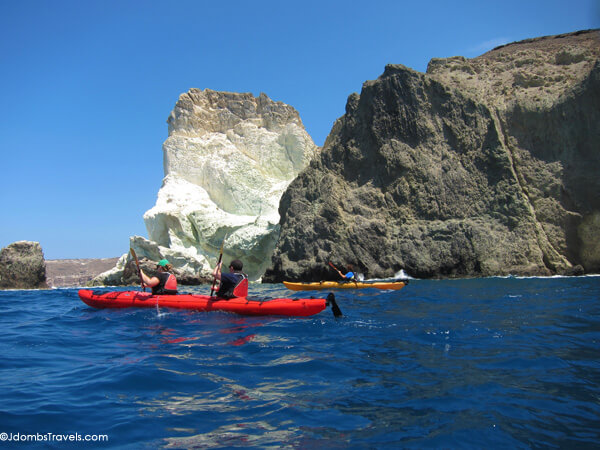 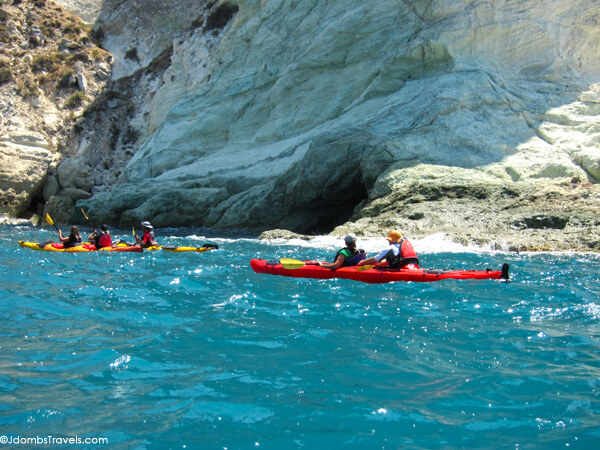 We paddled on, the spray of salt water picking up as we rounded the coast. The cliffs changed from red to black and then in complete stark contrast, white. The sea was roughest on our whole trip at this point and we got quite close to a sea cave that kayaks normally paddle in when the sea is calm. 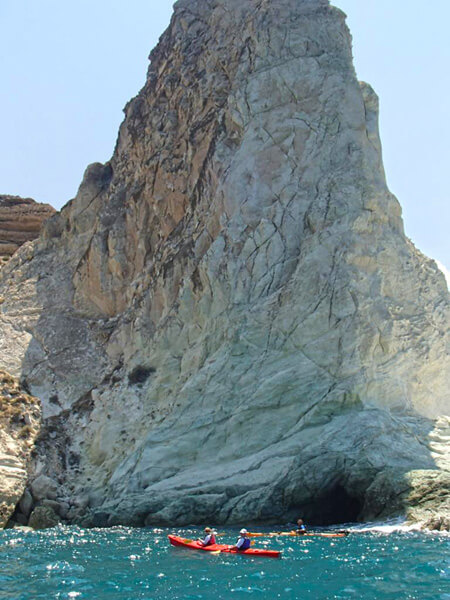 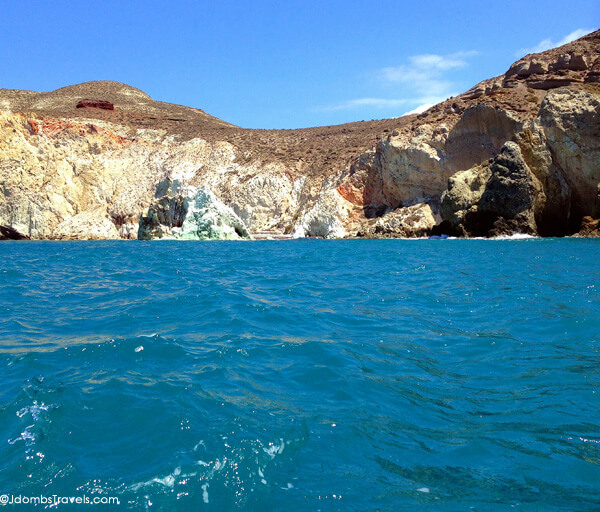 The towering white cliffs give way to a little opening known as White Beach. Completely secluded, White Beach can only be reached by boat or kayak. 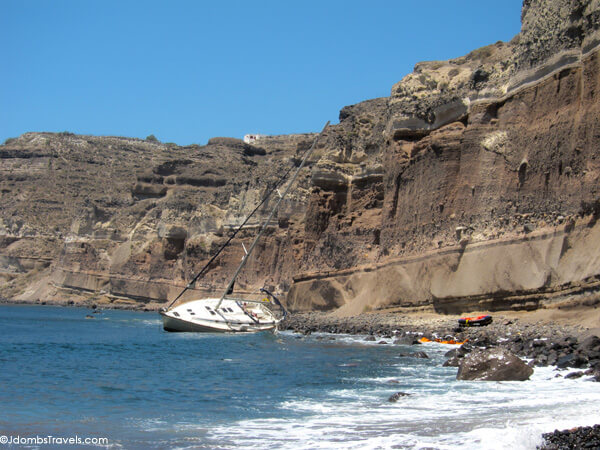 Just about everyone in our group was ready to paddle out of this rough patch of sea and we paddled on toward Kambia Beach, where we’d rest and have a picnic lunch. As we came closer to the black sand beach, we discovered we weren’t alone. Some sailors hadn’t quite anchored their boat properly and had a surprise in the middle of the night when they were tossed into the rocks along the shore. The Greek version of the EPA was already on site helping to drain the gasoline and oil from the boat. 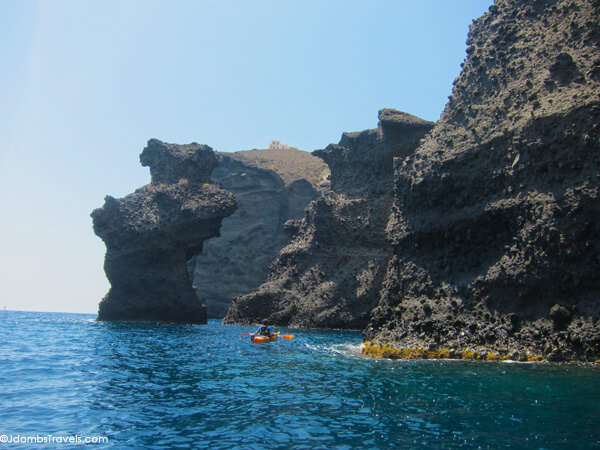 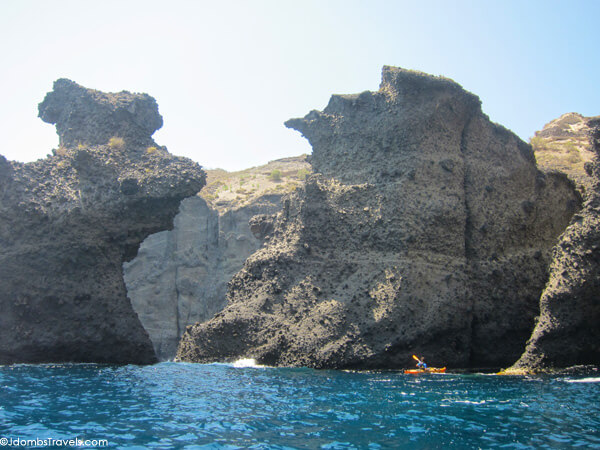 After a picnic lunch and time to just rest or snorkel from the secluded beach, it was time to suit up and hit the sea again. This was perhaps my favorite part of the sea kayak trip along the South Coast. Huge rock formations began to rise up our of the sea like mountains towering above us. And inlets led to more sea caves dotting the shoreline. It was other worldly. While the sea was much calmer here than it had been near the White Beach, it still wasn’t safe to paddle into the sea caves, which you normally do when the sea is calm. We paddled back, this time the wind pushing us along. Big smiles were all around as our group reached shore once again. It was a success sea kayak trip! No one tipped, no one got sea sick, and everyone had beat the rough seas on an unusually tough sea kayaking Santorini trip.

TipsBooking
Santorini Sea Kayak South Discovery tour is great for everyone from beginner to experienced sea kayakers. Pick-up and drop off to your hotel is included.
Book Now

Our Santorini South Discovery trip was hosted by Santorini Sea Kayak in order to bring your this story. As always, we were in no way asked to write a favorable review and all opinions are entirely our own. This article also contains affiliate links. When you purchase anything on Amazon

or book on Viator through our affiliate sites, we earn a small commission at no additional cost to you.