You are here: Home / Europe / Iceland / Snorkeling Silfra: Our Coldest Adventure Yet 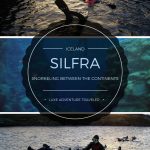 Our most extreme Iceland adventure has definitely been snorkeling Silfra, a crack between the North American and Eurasian continents. Located in Þingvallavatn Lake in Þingvellir National Park, the water is a mixture of ground water from the surrounding area and melt water from Langjökull glacier in the highlands. It’s some of the purest and clearest water in the world, attracting divers and snorkelers alike for both the visibility and the geological significance of swimming literally between two continents. It’s also very cold water, about 2°C (or 34°F) year round. 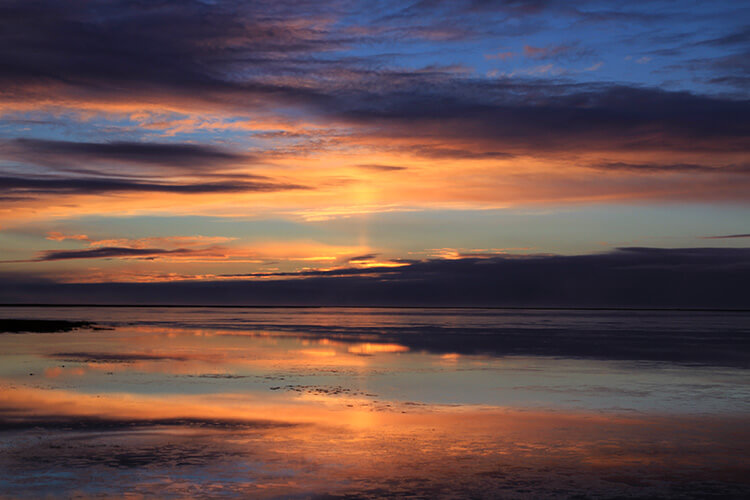 The water temperature was far warmer than the temperature outside. It was December 31 and the winds were gusting up to 40 miles per hour. The temperature was -1°C (30°F) but felt like -8°C (17°F) that day. The sun had just risen and didn’t provide much warmth as the clouds rolled in and it started snowing. I looked at Tim with an expression that must have said we were insane for snorkeling in cold water in such extreme conditions.

“This was your idea,” he said.

We were advised to wear thermals and thick socks. Dive.IS would provide the rest to keep us warm and comfortable in the water. We met up with our group at Þingvellir National Park and our guides advised us to stay inside the cars with hats and gloves while they readied all of our equipment. With the winds blasting us, I wasn’t about to argue. 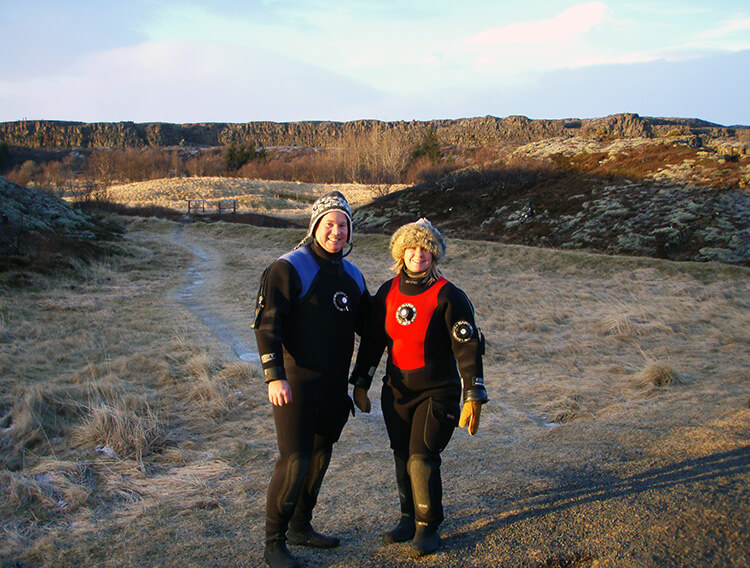 Drysuits are sexy, aren’t they?

We were each given a warm suit (think a quilted thin snow suit) to go over our thermals and easily zipped them up. Next came the incredibly uncomfortable drysuits. These are NOT easy to get in to. The rubber neck and wrists are tight to form a seal against your skin to keep the water from getting in. And if you’re a girl, be prepared to lose some hair as you shove your head up through the tiny little rubber neck. Our guides were a godsend helping everyone in the group get in to the drysuits.

The dive master helps me secure my neoprene gloves 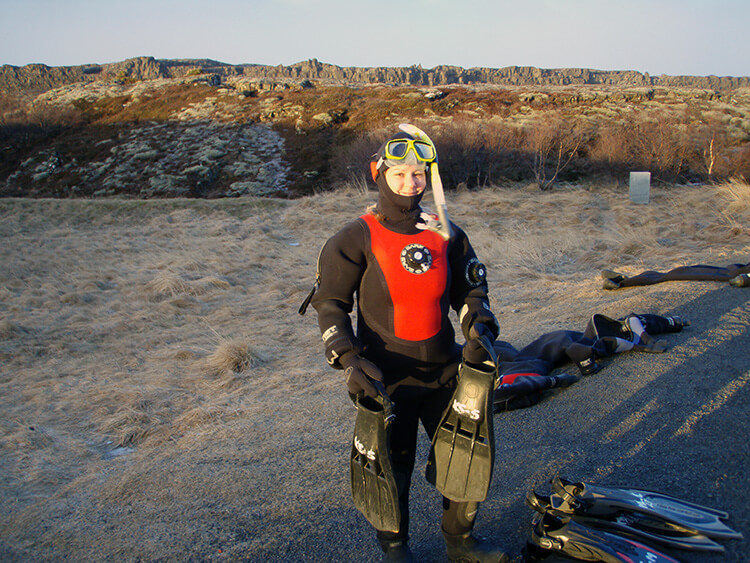 Once in the drysuit, I felt like that kid in A Christmas Story that has so many layers he can’t lower his arms. Totally me. And we weren’t done.

Next came a neoprene hood, neoprene gloves, a mask, and a snorkel. We carried our flippers and walked (waddled?) from the parking lot across the road and down a path to the dive site.

We were warned that water does come into the neoprene hoods and gloves, so to expect our head and hands to be wet. The water warms inside the hoods and gloves from your body temperature. So you don’t want to move your hands too much because as the cold water continues to enter, it’s harder for it to warm up. 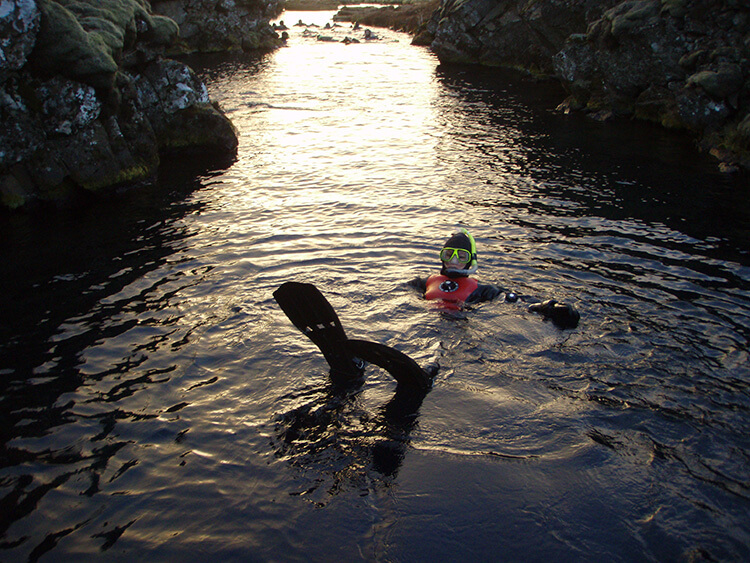 The drysuit keeps you floating right at the surface of the water and I floated on my back for a few minutes while the air pockets balanced out in the suit. It was much more comfortable than when I had been waddling around in it. As I flipped over, I braced myself for the cold. The water on my face wasn’t as cold as I was expecting and it took a bit for any water to even enter my gloves since I tend to keep my hands at my sides when snorkeling. 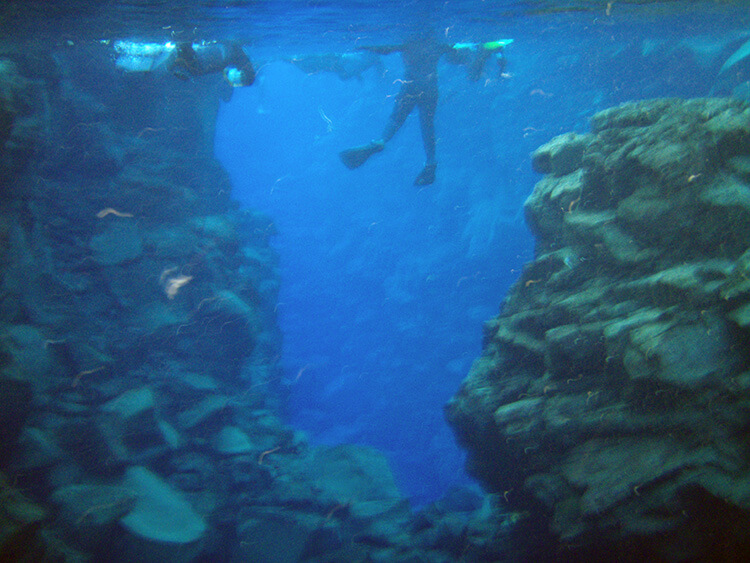 The water is incredibly clear and a world of various shades of blue. We floated with the current down the fissure and the water got deeper. Visibility was around 80 meters. There are no fish to look at, but there is the occasional neon yellow algae waving from the lava rocks. It’s not everyday that we can literally outstretch our arms to touch two continents and drink the glacial water we’re snorkeling in. It’s an amazingly beautiful underwater landscape and unfortunately neoprene mittens aren’t conducive to the best picture taking for us to really be able to do it justice. Coupled with the very low light during the Icelandic winter, please excuse our not great underwater photos. This deep area is called The Cathedral

We continued drifting until we reached the section of Silfra that is called The Cathedral. Here, walls of lava fall straight down for the most dramatic underwater views. At the end of The Cathedral, a sand slope suddenly appears and the current picks up quite a bit pushing the water out into the lake. It’s here that we needed to make a left turn. Our guides advised that if we did end up in the lake, they wouldn’t be able to immediately come rescue us and we might have a bit of wait. I was NOT missing that turn. I paddled against the current to make that turn.

My hands were pretty numb and cold by this point, so I was happy to swim into the lagoon. Apparently Tim’s hands were numb too because I watched him drop our GoPro, which he had been videoing with, and swim on. Thankfully he hadn’t dropped it in The Cathedral! He realized a minute later and struggled against the drysuit keeping him above the water to retrieve it. Exiting out of the lagoon

We exited out of the lagoon one by one onto very slippery rocks. From there, it was a 300 meter walk back to the parking area where we’d change out of all of our gear.

If snorkeling during Iceland’s summer months, the walk can even make you sweat. That sure wasn’t the case on this freezing winter day. The next 15 minutes were the coldest of our entire lives, and we’ve been to the High Arctic in winter. The wind blasted us as we walked against it back to the parking lot and I watched in amazement as the back of Tim’s drysuit literally turned to ice like that scene in The Day After Tomorrow when the ice creeps up the Statue of Liberty.

Back in the parking lot, Dive.IS guides were there to help us quickly get out of the drysuits. I ripped the neoprene hood from my head and my hair froze into little stands of icicles immediately as the wind and snow blasted me. My hands were so numb I could hardly move them and a guide worked to quickly get the drysuit off so I could put my gloves on. I sat at the back of the van as the drysuit was finally peeled off and then sprinted for our Landcruiser to layer back up in my Icelandic wool sweater, coat, hat, and gloves.

Were we insane? Probably.

Were those last 15 excruciatingly cold minutes worth snorkeling Silfra? Definitely!

And let me tell you, a hot shower NEVER felt so good.

Booking and TransportationTips
Book with Dive.IS. Free hotel pick-up and return is available or you can meet at the Information Center in Þingvellir National Park at a designated time.

Dive.IS hosted us on the Snorkeling Silfra tour in order to bring you this story. As always, all opinions and decisions to snorkel in the middle of winter in Iceland are entirely our own.