You are here: Home / Africa / Morocco / Telouet: The Kasbah of a Traitor

The 4×4 bounced along the dirt road, dust trailing behind us. We’d left the buses and other tourists traveling between Marrakech and the Sahara long behind. Though just 28 miles away tourists were arriving by the busload to the famous kasbah Ait Benhaddou, they could have been a million miles away. The only other people we encountered were some children walking their baby donkey and one man who sold us the entry ticket for the Kasbah Telouet. 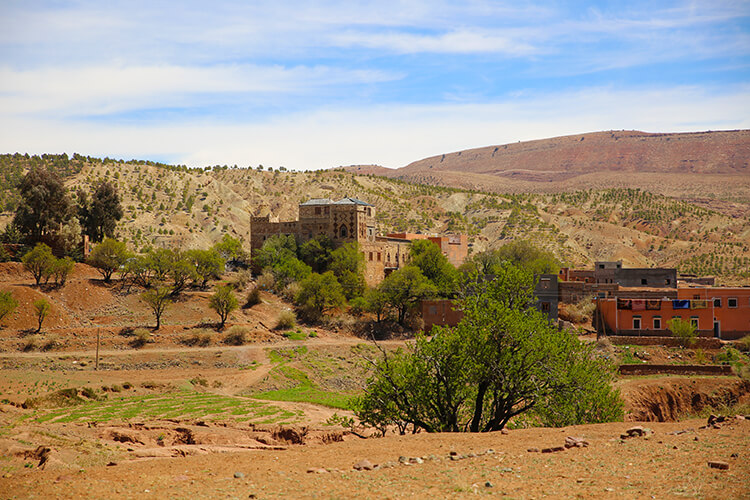 The Kasbah Telouet sits proudly atop a hill

Toto, I don’t think we’re on the tourist trail anymore.

It once took 52 days just to cross the Sahara. After finally making it across the desert, the trade caravan routes that connected sub-Saharan African with Marrakech then passed through the Ounila Valley dotted with kasbahs (fortresses and citadels) and mansions of the rich merchants and the pashas. The most famous of those kasbahs is Ait Benhaddou, a UNESCO World Heritage Site that just about every visitor making the trip from Marrakech to the Sahara stops at.

My friend Amanda, an American married to a Moroccan and living in Marrakech, was so excited to visit Telouet. I tried Googling it when she sent me our itinerary and I couldn’t find much – or anything, really – about it. The Kasbah Telouet is on the camel caravan routes, but not many tourists visit it and most won’t have even heard of it. That’s because the Kasbah Telouet was seized by the state and left to decay after its’ ruling pasha fell from grace for being a traitor. 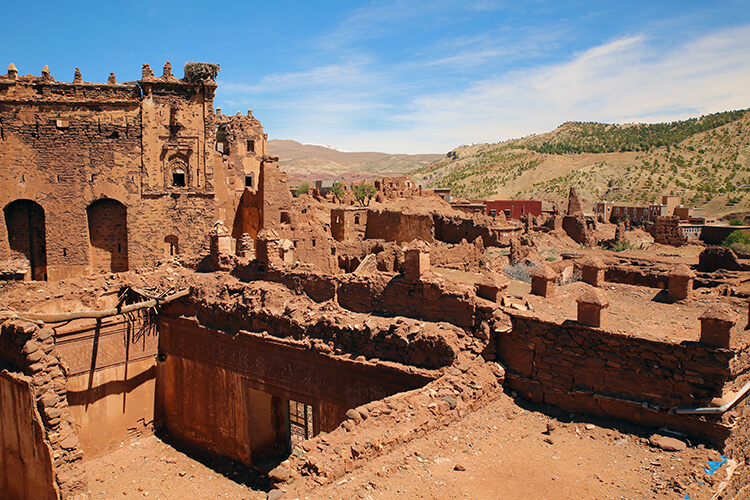 The former palace of a Pasha more powerful than the Sultan

The History of Morocco in 30 Seconds

It’s important to understand a little bit of Moroccan history here to really understand why this beautiful kasbah was left abandoned and to this day ignored by the King.

Morocco was a French Protectorate, established under the Treaty of Fez in 1912. The Sultan of Morocco, Mohammed Ben Youssef, (known as Mohammed V ) had begun to entertain the idea of independence from France as early as the end the WWII. Our President at the time, FDR, even encouraged the Sultan to fight for independence. In 1947, Mohammed V officially began to distance himself from the French Protectorate and support the Independence Party.

Under this French Protectorate was a feudal system of “government”, with the Sultan was at the top and he had a court led by a Grand Vizier. The next, or third level tier of the feudal system, were called pashas and they were the equivalent of dukes. The pashas were charged with keeping order and collecting taxes. They wielded quite a lot of power, many of them even keeping armies of their own.

The year was 1953. Thami El Glaoui used his power over most of southern Morocco and sided with the French to overthrow the Sultan, Mohammed V. El Glaoui had Mohammed V and his family forcibly exiled to Corsica and his uncle, Mohammed Ben Aarafa, was declared the Sultan of Morocco. 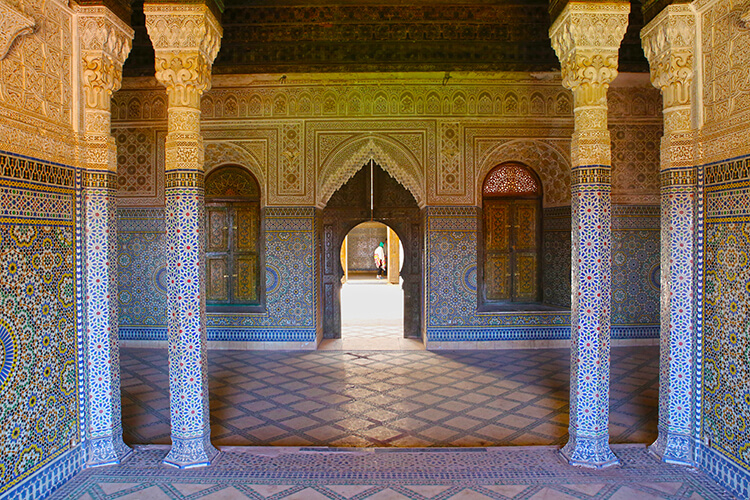 From Saviors to Traitors

The Glaoui family had already started the construction of the Kasbah Telouet in 1860. They really came into power when they were greatly rewarded for rescuing the then-ruling Sultan in a snow storm in 1893. Part of the reward even included a canon. 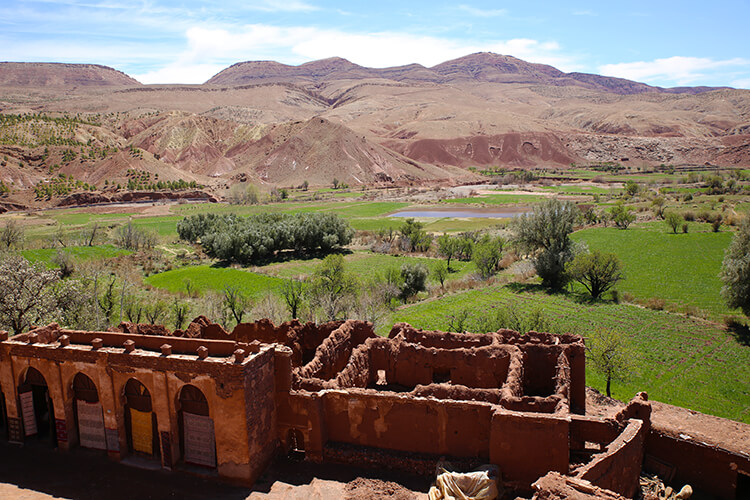 Thami El Glaoui became the Pasha of Marrakech in 1912 and, at the time, one of the wealthiest men in the world thanks to his dubious dealings in the salt, olive and saffron trade. He was known as the Lord of the Atlas and ruled over the Glaoua tribe of Berbers in Morocco.

They were known as a ruthless clan and it’s said that the severed heads of their foes were displayed for all to see on spikes on the ramparts. Locals that disappeared from their villages were thought to be held as prisoners on barely life-sustaining rations inside the fortress. 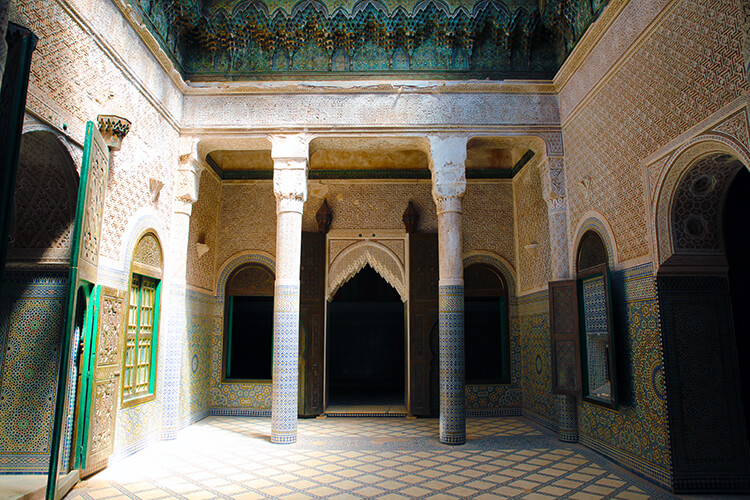 It wasn’t all just gloom and doom inside there. Not if you were the glitterati of the mid-1900s, anyway. El Glaoui may have used that canon to terrorize the south side of the Atlas Mountains, but he threw ostentatious parties where he hobnobbed with royalty, world leaders and bureaucrats. I imagine El Glaoui was something of a Great Gatsby of Morocco.

The heads and legends of savagery wouldn’t be warning enough, though. In 1955 when active opposition to the French Protectorate grew on a great scale, Mohammed Ben Aarafa fled to Tangier where he abdicated as Sultan. The French conceded and Mohammed V was returned from exile on November 16, 1955, though not before ousting Thami El Glaoui for the traitor that he was. 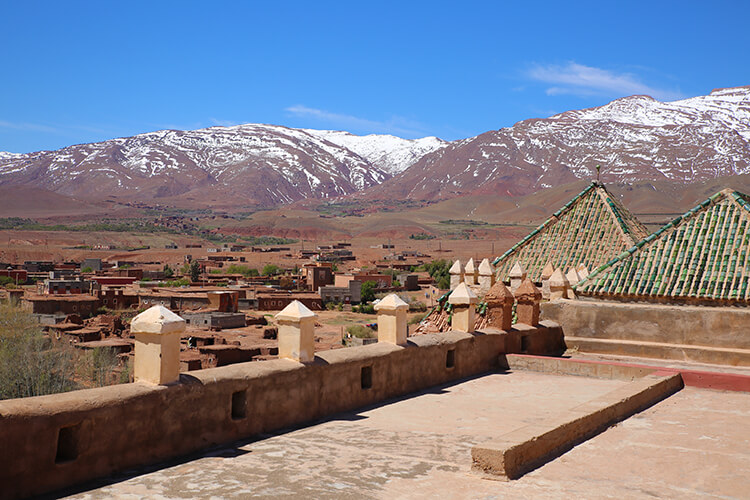 You can only visit about 10% of the Kasbah, but you can climb up on to the roof

The Abandonment of Kasbah Telouet

While I personally would have been of the philosophy an eye for an eye, Thami El Glaoui knelt at the feet of Mohammed V and begged for his mercy once he knew the former Sultan’s return was eminent. Mohammed V forgave him. 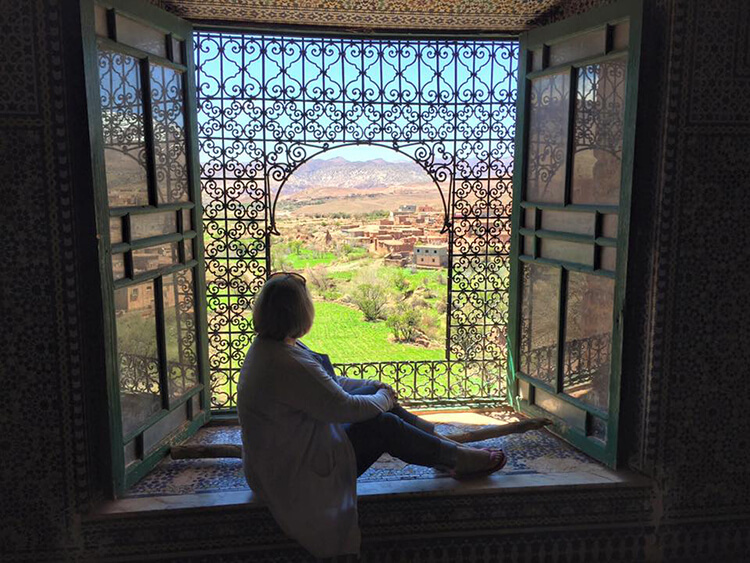 Pondering a different time in Morocco

Karma is a bitch though, because Thami El Glaoui died a broken man little more than two months later during his evening prayers. Perhaps he prayed for death. We’ll never know.

The Kasbah of Telouet and the other iconic Glaoui fortresses in the south of Morocco, as well as all their assets were seized by the state. The lynch mob was too late for justice, but the new King would ensure the surviving El Glaoui family would never be the source of another coup d’état. 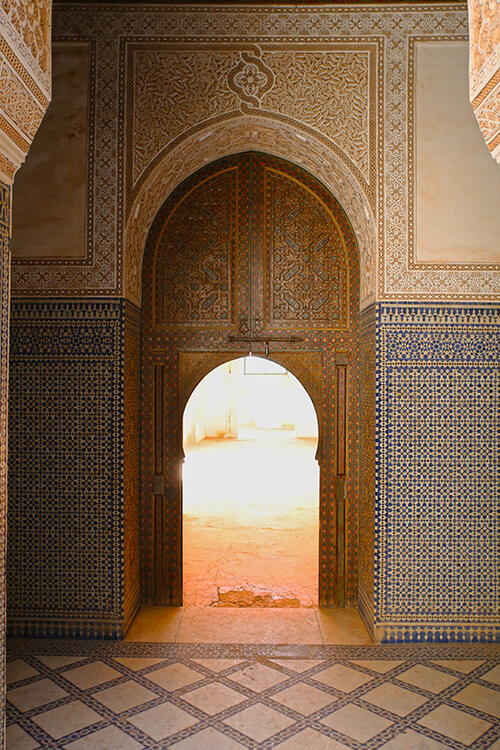 A beautiful example of Moorish architecture

The Moroccan government is rather ambivalent about the Kasbah Telouet. On one hand, it is a superb example of Moorish architecture. On the other, unspeakable crimes of treason were carried out here. For now, any restoration work is  privately funded by the El Glaoui family and from the small entry fee donation of 5-10 dirham ($0.50 – $1 USD) collected from the occasional visitor like us.

The Kasbah was never actually finished, but the amount of work and money that went in to building the opulent fortress is unfathomable. The incredible mosaics and intricate details give a glimpse into what must have been before a mob looted it and destroyed all that they could.

Luxury Glamping in the Sahara Desert

Our visit to Telouet was part of our Amazing Journeys Morocco tour in order to bring you this story. However, Luxe Adventure Traveler maintains full editorial control of the content published on this site. As always, all thoughts, opinions, and enthusiasm for travel are entirely our own.