You are here: Home / Europe / Romania / 5 Things to Do in Bucharest

Bucharest and I were like my college boyfriends. We had enough things in common to get along for a short bit, but somehow it just didn’t really work. It would never be true love. Frankly, I found Bucharest to be mediocre at best. The food was bland, the buildings were crumbling (and not in a charming way) and it really felt like an over-congested city lacking much character (except for the 90-year old granny that nearly clocked me for trying to use a bathroom; now she was definitely a character).

Perhaps if I were a millennial backpacker in to the nightclub scene, I’d have had a better time. There were certainly no shortage of clubs serving up cheap drink where you could party until dawn. The smoke filled clubs and staying up until the sun rises (unless I’m Northern Lights hunting) just isn’t my thing these days.

Bucharest and I parted ways and, expect for a few bottles of good Romanian wine now in my collection as a reminder, the trip is already a faint memory. If, like I often do even when I’ve been warned off places, you still have the burning desire to check the Romanian capital off your list, here’s my round up of the best things to do in Bucharest (and read to the bottom for the bathroom brawling granny story): 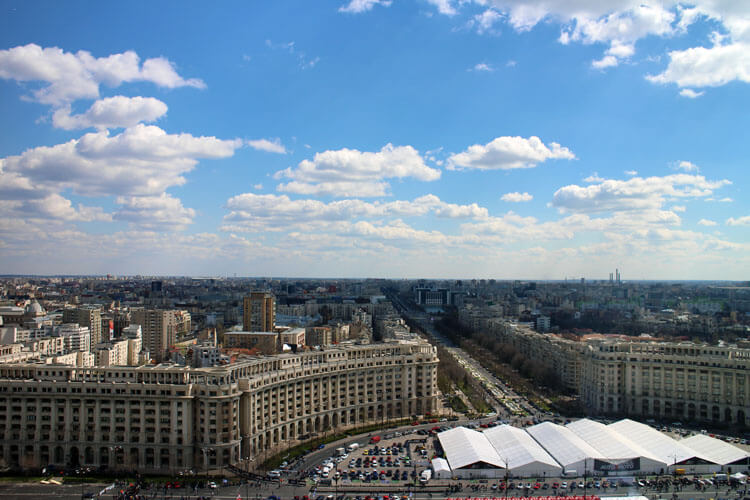 Either way, the Parliament Palace has been at the center of controversy since its construction from 1974 to 1989 when dictator Nicolae Ceausescu demanded that it only be built from Romanian materials. And while I found the tour of the interior mostly underwhelming (a lot of the tour is focused on the guide explaining exactly which part of Romania the marble and other materials used to build and decorate it came from), I can’t deny that the views from the Parliament Palace’s terrace are pretty spectacular.

Romania seems to have a bigger is better outlook. You can get a feel of that as you gaze upon Boulevard Unirii from the terrace. The boulevard was Communist Romania’s answer to Paris’ Champs-Élysées, though it is both wider and longer than its French counterpart. 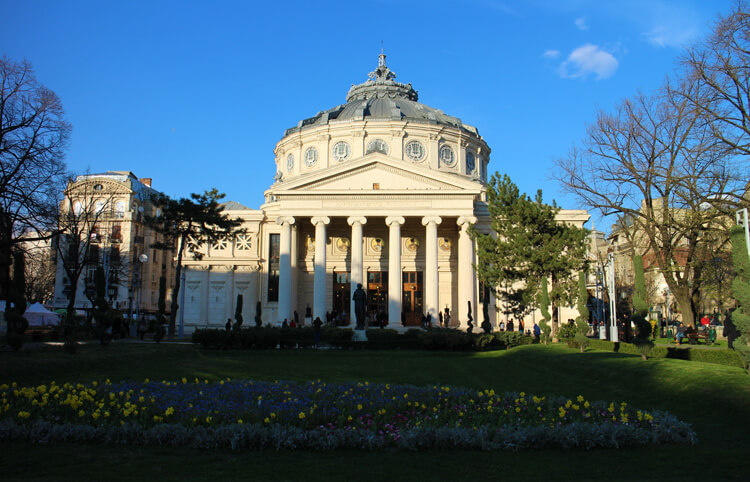 Take in a Concert at the Romanian Athenaeum

Known for its superior acoustics, the Romanian Athenaeum is Romania’s most prestigious concert hall. It currently hosts the George Enescu Philharmonic. If you ever wanted to get dressed up to go see a philharmonic concert, this is the place with tickets for the best seats in the house at just $15 USD.

Check the philharmonic’s website for information and to purchase tickets.

Stroll Around the Old Town

While I found most of Bucharest to be a crumbling mess of ugly Communist-era buildings, the Old Town was surprisingly charming. There are cute shops lining the pedestrian street Strada Lipscani, lovely churches and an assortment of cafes with outdoor seating where you can blessedly escape the blanket of smoke in the restaurants. You’ll even find a statue of Vlad the Impaler, who Dracula’s character was based off it, in the old town.

Don’t miss Revolution Square, where the former Royal Palace (now the National Museum of Art), Memorial of Rebirth and Library of the University of Bucharest are located. The square is also home to the building of the former Central Committee of the Romanian Communist Party. It was from this building that Nicolae Ceaușescu and his wife fled by helicopter on December 22, 1989. After Ceaușescu fled, the crowds in the square celebrated and it essentially ended 42 years of Communist rule. My absolute favorite place I visited while in Romania was the barely one-month old Carturesti Carusel (meaning carousel of light) bookstore. Perhaps because I’ve been living in Italy for many years now, but this reminded me of the grand Barnes and Noble bookstores that I could lose a few hours in. Italy is seriously lacking in any bookstores I want to spend some time hanging out in. It’s located in a beautifully restored 19th century building on a lovely pedestrian street and it does carry books in English.

But not just books. No, I found an impressive selection of loose leaf teas and Romanian wines, as well as other cool gadgets and trinkets. There is a top level cafe that serves many of the loose leaf teas sold, coffees, drinks and pastries. I grabbed a book all about wine and relaxed for a few hours on a very quiet Sunday morning with a pot of tea and a green matcha tea crème brûlée (totally acceptable for breakfast) in the cafe. Oh, and did I mention the free wifi? This bookstore was definitely my slice of heaven in Bucharest.

Carturesti Carusel is open daily from 10am – 12am and is located at Strada Lipscani 55. 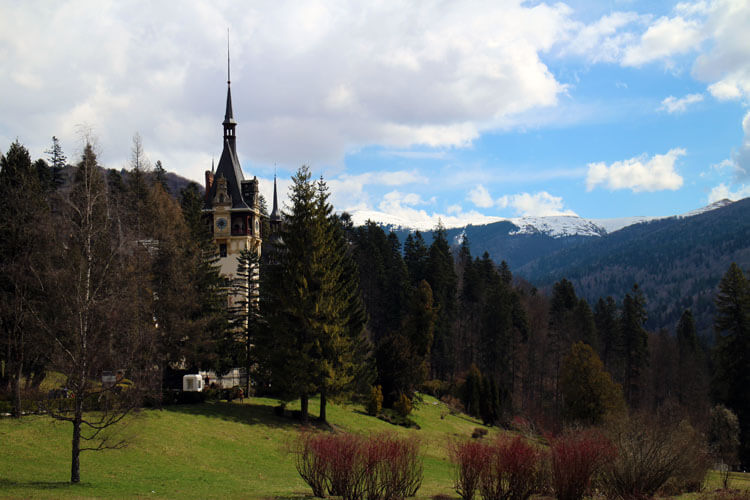 Getting my first peek at Peles Palace

While not in Bucharest, you can take a day trip from the city to two of Romania’s beautiful castles.

Bran Castle was at the top of my Romania bucket list and while the exterior and surroundings are striking, I much preferred Peleș Castle. It is considered one of the most beautiful castles in all of Europe, after all. The castle might remind you of German castles and that’s because it was built by a German prince who became King of Romania. The castle has over 170 rooms, though the hour long tour only takes you through a small sampling of them.

Each room is unique with the style mostly German Renaissance, but there are other elements from the Italian Renaissance, French Rococo, Gothic and German Baroque styles. I tend to skip the inside of most castles these days because if you’ve been in one, it’s like you’ve been in them all. But the eclectic mix of ornate mirrors, secret escape routes, armory and spiral staircases definitely kept me interested. 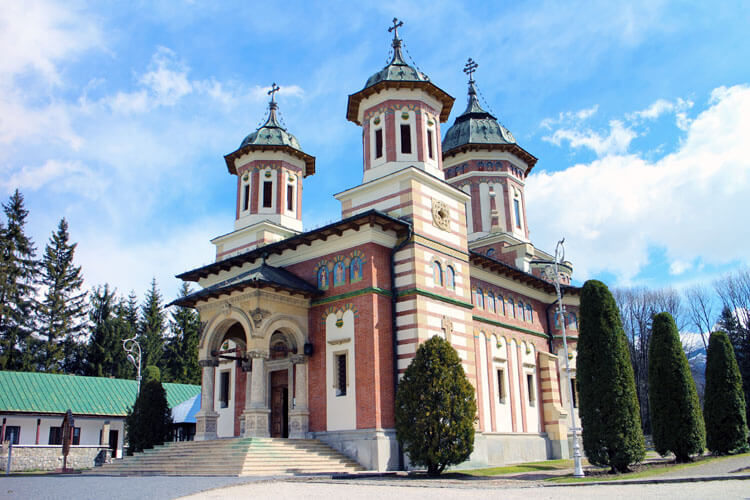 The surrounding area is also beautiful and the Sinaia Monastery is well-worth a stop. The monastery is comprised of two Byzantine-style churches, one from 1695 and a newer church built in 1846. The interiors reminded me quite a bit of churches we visited in Russia with their ornate paintings. 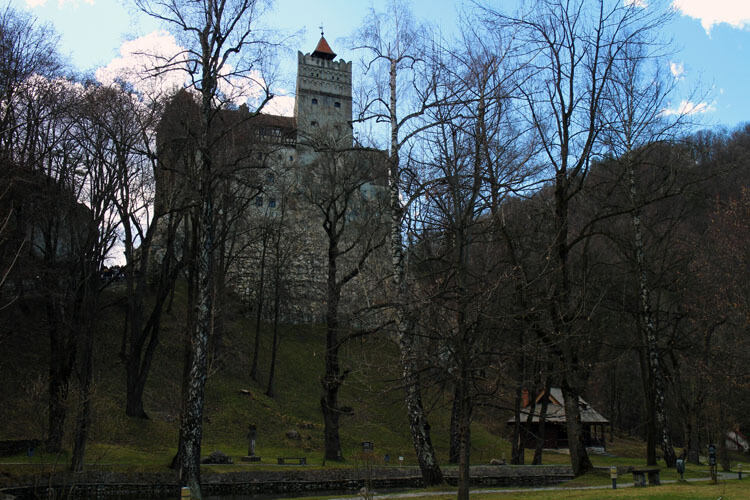 Bran Castle isn’t spooky at all

Bran Castle is much older than the 19th century Peles Palace, dating from the 14th century. Of course, Bran Castle is famous as the setting of Bram Stoker’s Dracula, making it Romania’s number one tourist attraction. Even on a quiet April weekday when I’d hardly seen any other cars in the Romanian countryside, we arrived to tourists by the busload at Bran Castle.

Though I think Romania could really capitalize on the Dracula connection, there’s hardly a mention of the infamous vampire at the castle. It disappointingly looked like many castles I’ve toured in Europe. The castle was occupied by Vlad the Impaler’s family, but Vlad himself never even actually lived there. It’s sparsely furnished and a tiny exhibit of photos on one wall on the top floor mentions Hollywood’s fascination with Dracula.

While I had rushed through Peles Palace in order to have time to visit both castles, Peles Palace had far more interesting items throughout. I can’t dispute the beautiful setting of Bran Castle though.

Peles Palace is difficult to reach via the train. You can book a guided day trip to Peles Palace and Bran Castle with Click2Travel.

I was in Bucharest with a group on a media visit and there were about 30 of us. We had lunch at <insert name>, which is the most touristy restaurant in the city. Aside from the charm of the oldest building in Bucharest, just avoid it. The food was not good and the bathroom attendant made it a horrible experience for me.

The bathroom is located in another building in the restaurant complex, so I went with two other bloggers to use it before our walking tour. The first time I went up, a little old woman that I towered over (I’m 5’2″ by the way) stopped me in my tracks and told me “nyet.” I walked away since I thought she was going to clean it.

Standing 20 meters away or so in the courtyard, we watched for a bit. Finally some other people went it to use the bathroom, so the other bloggers urged me to go.

In the meantime, some of the other bloggers had gone off to get our group guide. Heated words were exchanged between him and the granny. Marching back over to me, Toma explained that I would not, under any circumstances, by using that bathroom. Thankfully there was a Starbucks across the courtyard and I was more than welcome to use their bathroom.

In the heat of the moment of a granny that had to be 90 years old getting physical with me, no one realized that she had been screaming “Nyet!” Nyet is Russian for no. We determined she must of thought I was Russian, even though I was speaking English (and really, what Russian is 5 feet tall?). Bitter much?

My #EnjoyBucharest trip was provided by Eventur Bucharest with the support of ARCUB, Bucharest City Hall , Blue Air and Intercontinental Hotel in order to bring you this story. However, Luxe Adventure Traveler maintains full editorial control of the content published on this site. As always, all thoughts, opinions, and enthusiasm for travel are entirely our own.