You are here: Home / Europe / Russia / 10 Things to Taste in Russia

Russian cuisine is based off the peasant food of the rural population that had to deal with a harsh, long-lasting winter. Traditional Russian food is meant to fatten people up in preparation for the long winter ahead and has more carbohydrates and fat than proteins. Not entirely sure what to expect, we found a variety of rich and flavorful dishes. In no particular order, here are 10 things to taste in Russia (and since we didn’t find very many menus in English, I’ve included their names in Russian): 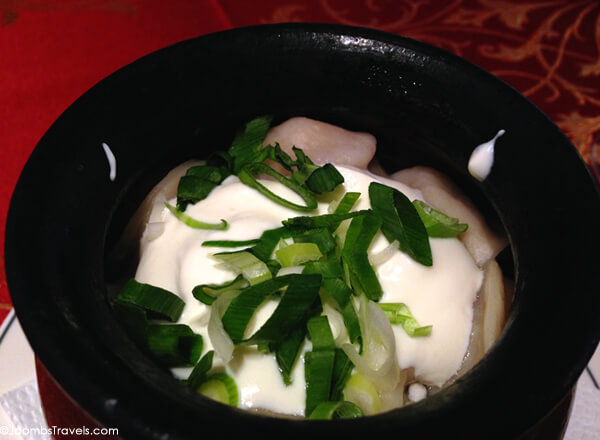 Pelmeni filled with wild boar and topped with sour cream

Where to get it: Trapeznaya in the Kremlin, Suzdal. 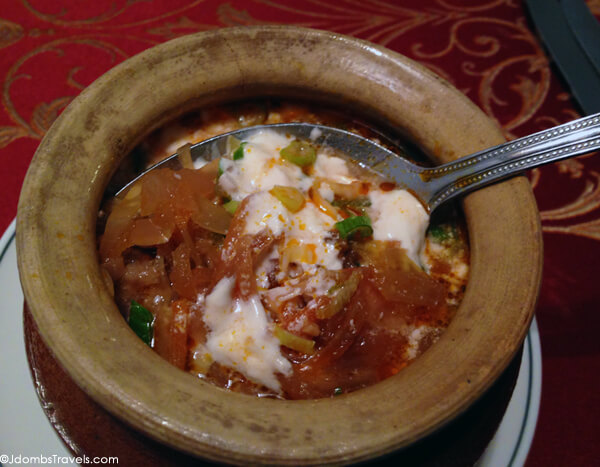 Borscht is a hearty soup made with julienned beetroot, which gives it a burgundy or purple color, beef broth, cabbage, and meat. It’s usually eaten as an appetizer, though in warmer temperatures like we had in Moscow and St. Petersburg, is filling enough for a meal, especially when eaten with black bread. Never one for the odd purple colored beets that were ever present in big jars at the butcher’s as a kid (Though, honestly. What kid willingly eats beets?), I was surprised how much I liked Borscht. I think I had it nearly every meal and I never had a bad Borscht.

Where to get it: Just about any restaurant. 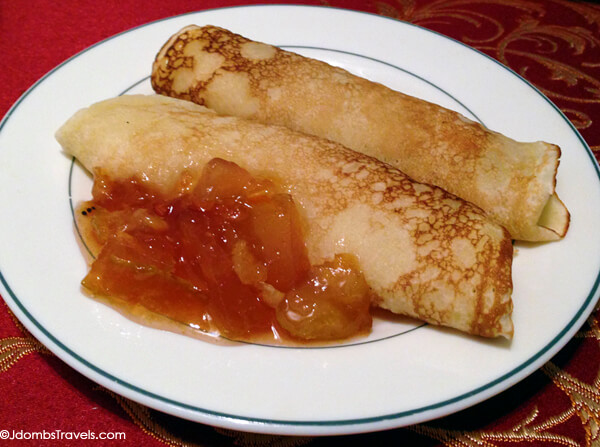 Blini are thin pancakes, almost like a crepe, said to symbolize the sun – warm, round, and golden. In Russia, they are made from buckwheat and come in savory or sweet varieties. Blini are beloved and eaten everywhere. No, really. Russians even have a week long festival called Maslenitsa just to celebrate this staple of Russian cuisine. We had them for breakfast, lunch, and dinner. We both preferred the sweet to the savory with our favorite being ones served with fruit jam.

Where to get it: Just about any restaurant, though the best we had were the blini with jam at Trapeznaya in the Kremlin, Suzdal. 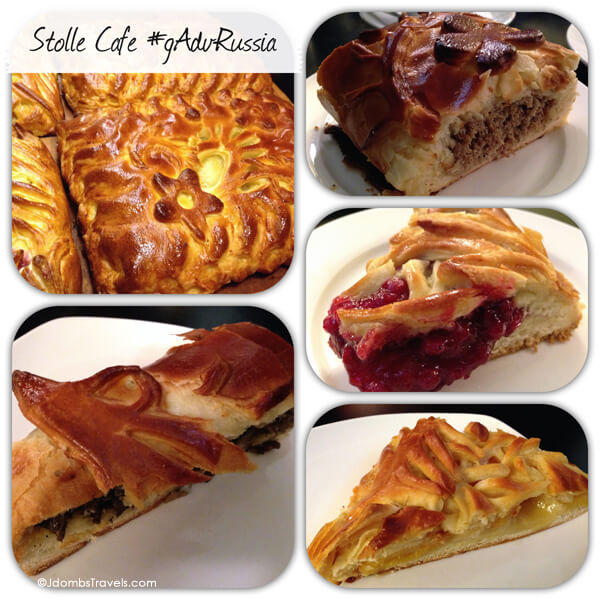 Pirogi (plural) shouldn’t be confused with Polish pierogi; they are entirely different. Pirogi are Russian pies that are filled with savory or sweet fillings. The puff pastry-like crusts are beautifully decorated in floral patterns almost too pretty to cut into. Almost. I had a small slice of mushroom so I’d also have room for a small slice of apricot. Tim had a slice of beef pie and cranberry for dessert. Hello, pirog party in my mouth!

Where to get it: Stolle Cafe Konushenny Lane 1/6, St. Petersburg 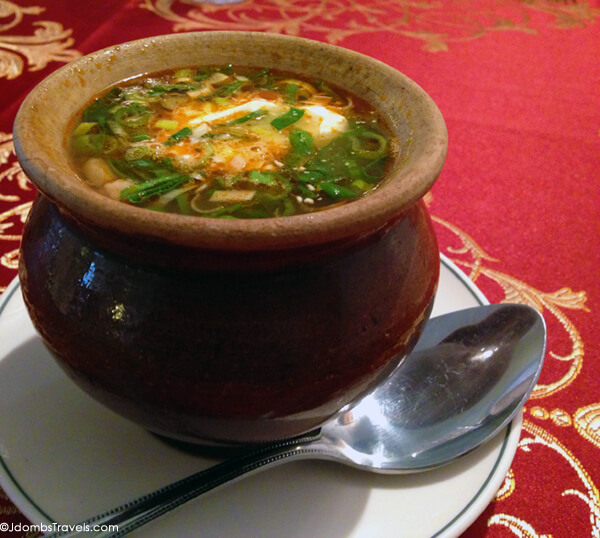 Solyanka is a heartier soup, more like a stew. There are basically three varieties: fish, meat, or mushroom. We had the meat with fine cut pickles, onions, herbs and spices all mixed with sour cream in a little pot.

Where to get it: Any restaurant serving traditional Russian food. 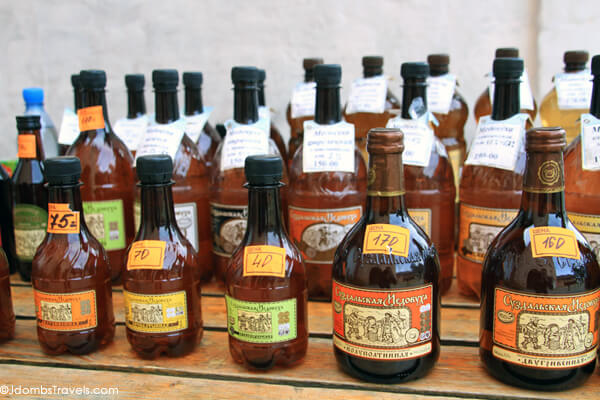 Wild honey farming was one of the first Slavic trades and they discovered that it could be fermented. Medovukha is a type of alcoholic mead made from honey and is the most famous drink in Suzdal. Dating back to Pagan times, it was originally only drunk by nobility because it was very expensive to produce, since it took between 5 to 20 years to ferment. Most modern medovukha producers are proud that their beverages are made only from natural ingredients and they speed up the fermentation process by heating it.

Where to get it: You can taste medovukha at the shop inside the Kremlin; you can also purchase it there. 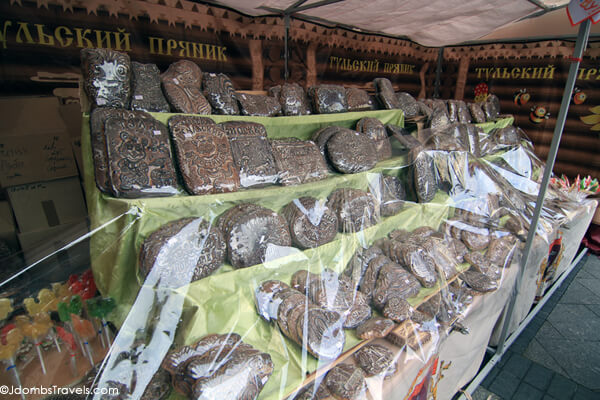 Tula Gingerbread at a market in Moscow

Where to get it: Many of the daily town markets or at grocery stores. 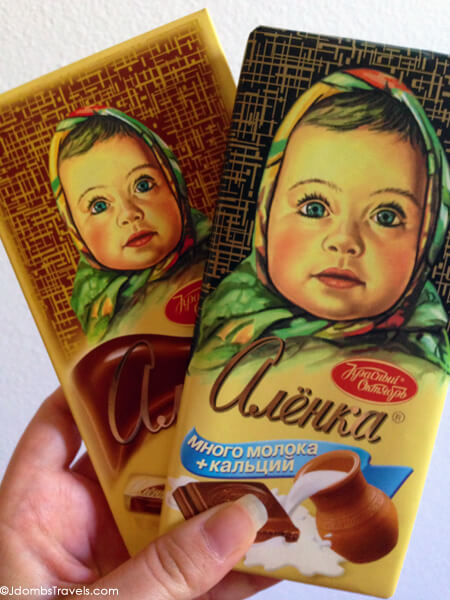 Alenka chocolate is the most recognizable brand of Russian chocolate. Probably because of a big smiling baby on the packaging. Alenka has been produced since 1965 and was first made as part of a socialist food program and mass produced affordable milk chocolate. The company wanted to find just the right packaging for the bar of milk chocolate, so held a competition which was advertised in the Moscow newspaper. The 8-month old baby girl that still adorns the wrapper today was the winner. Rumor has it that the baby girl was actually Svetlana Allilueva, Stalin’s daughter.

Where to get it: Most grocery stores and at the airport. 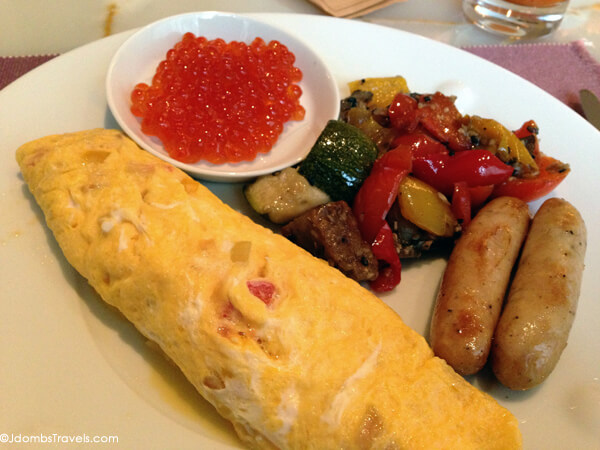 Omelet and red caviar for breakfast!

Caviar has traditionally been associated with luxury and wealth, so it’s not surprising that a lot of caviar is consumed in Russia. Black caviar, from sturgeon roe, is the rarest and costliest type of caviar and it is extremely popular in Russia. The red salmon caviar is also popular. We didn’t get to try the famed black caviar, which can be sold for up to $5500 per kilogram, but we had our fill of red caviar since it was served at breakfast each morning at the Lotte Hotel Moscow.

Where to get it: High-end restaurants and some supermarkets like Yeliseevsky in Moscow and St. Petersburg. 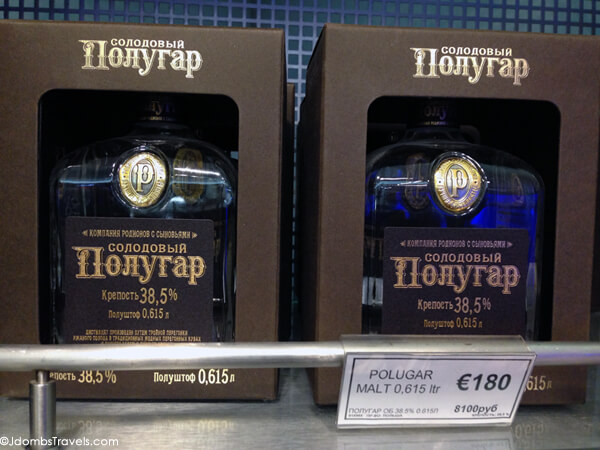 At that price, must be good, right?

More than 70% of all alcohol consumed in Russia is vodka. According to a legend (Russia sure has a lot of them!), around 1430, a monk named Isidore from Chudov Monastery inside the Moscow Kremlin made the first Russian vodka. Vodka for exclusively produced only in Moscow for a very long time. Nowadays, you can find vodka anywhere. And not just any vodka! There’s horseradish vodka, blueberry vodka, red pepper vodka, honey vodka…the list goes on and the vodka section of a menu often reads like a wine list. Not into the “burning wine”? Try Russian champagne or sparkling wine like a Bourjois Muskat instead.

Where to get it: If you can’t find vodka, you must not be in Russia!

For more foodie inspiration, visit Foodie Tuesdays on Inside Journeys.

Reader question: Which of these 10 things to taste in Russia would you most like to try?