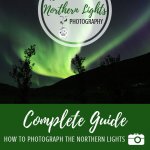 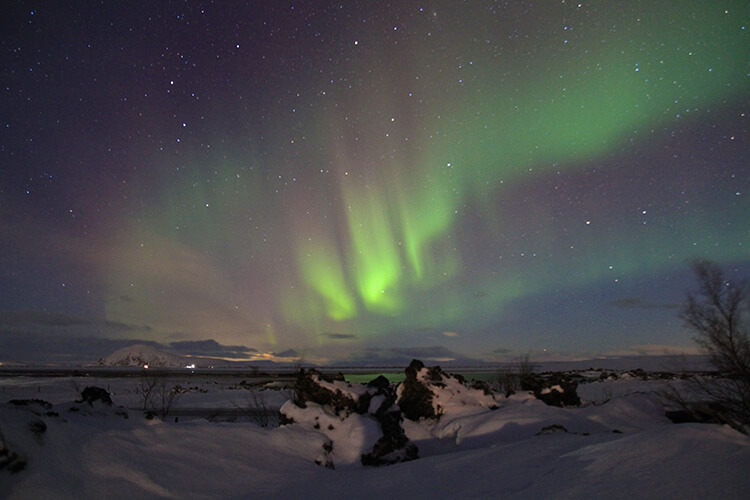 1. You need a tripod to photograph the Northern Lights.

You need a tripod, and preferably a sturdy one. When you’re photographing Northern Lights it will be dark, and probably cold and windy. Plus, to get that perfect foreground you’re looking for, you may not be on flat and level terrain and will more than likely be on unstable snow and ice. Since we are always on the go, we needed a travel friendly tripod. We recently upgraded to the MeFoto Roadtrip Carbon Fiber Tripod, it folds down to 16″ and can support 17lbs of lens. Previously we used the Slik Sprint tripod, it only weighs 2lbs and folds down to 18″ so it fits inside or strapped to my backpack. Our current camera and lens set-up weighs a little too much for this little guy now though. 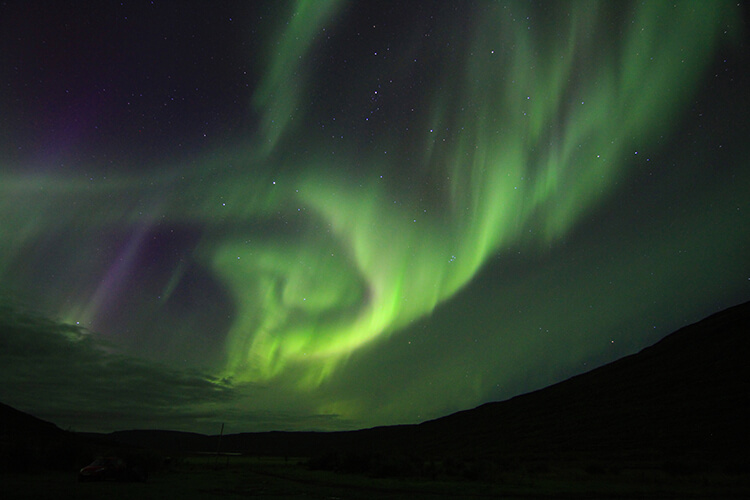 A massive display swirls around the sky over the Westfjords

2. Keep your hands from being exposed to the elements.

Weather in the Arctic during Northern Lights season, which is basically from September – March, is not only cold, but often windy. You’ll likely be outside for long periods of time when photographing the Aurora and you want to keep yourself from being exposed to the elements as much as possible. This includes your hands. Have you ever tried to work your camera while wearing thick gloves? It’s not easy and constantly taking your gloves off isn’t ideal. A pair of fleece gloves with removable fingertips like Freehands Photographers Gloves, only expose your index fingers while keeping the rest of your hands toasty. 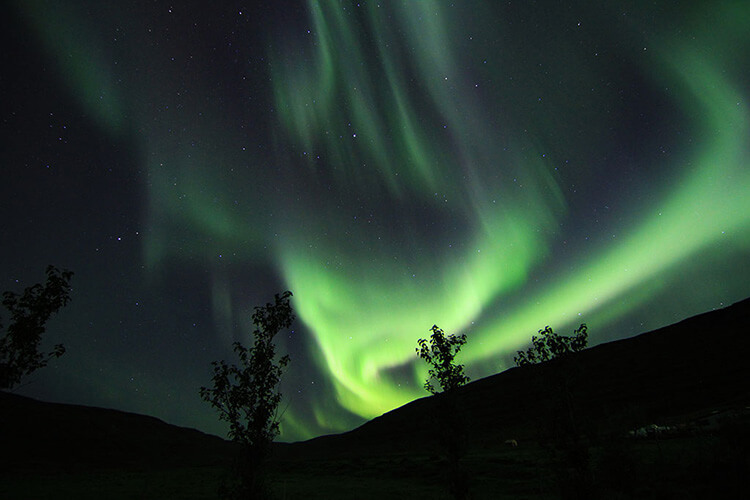 Stunning swirls over Heydalur in the Westfjords

3. Invest in a remote shutter release. 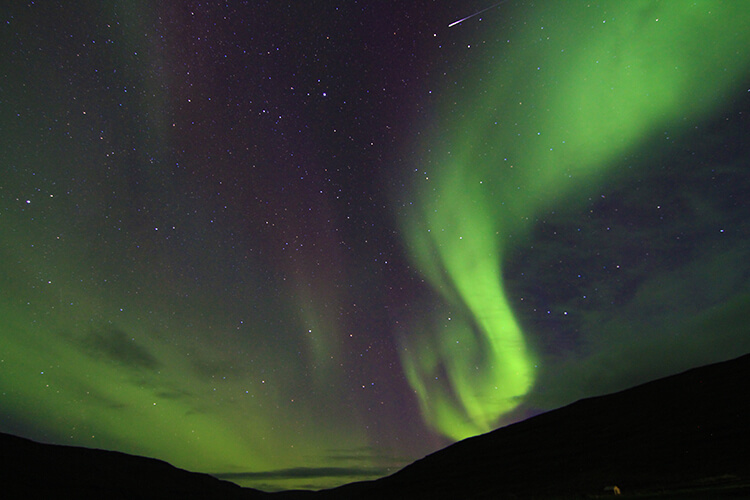 Northern Lights and shooting stars in the Westfjords

4. You don’t need an expensive camera, but you do need one with manual settings.

A point and shoot won’t do the trick when photographing the Aurora Borealis. You don’t need an expensive and fancy camera, but you do need one with settings that you can adjust manually. This is because the automatic setting can be fine when your camera and lens can measure the surroundings during the daylight, but is essentially useless in the dark and especially when photographing the night sky. On the automatic setting, your camera will constantly search for something to focus on and can’t let enough light in to capture the Northern Lights. You need to be able to control the ISO (the light sensitivity), the aperture (how much light your lens lets in), and the shutter speed (how long your lens absorbs the light) in order to capture quality photographs of the Northern Lights. 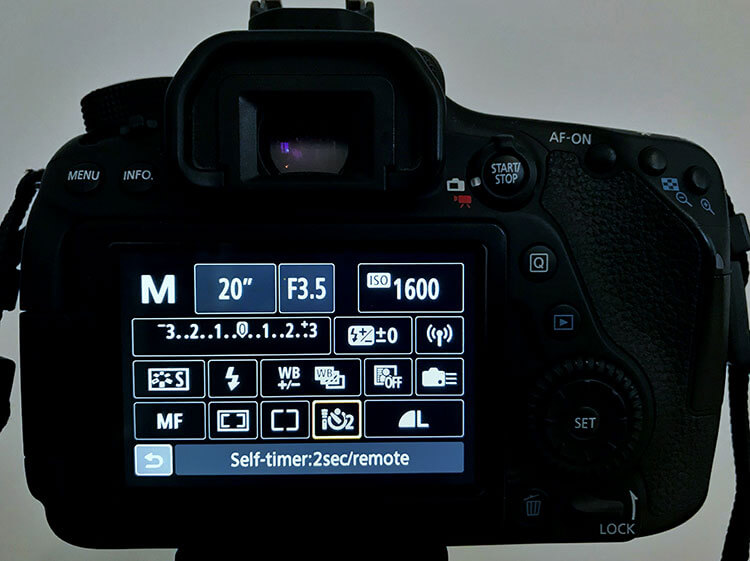 Depending on how bright or how dim the Aurora is, plus your surroundings will change the exact camera settings for Northern Lights that you need to use. But start with these settings and adjust as necessary:

We have used a few cameras to photograph the Northern Lights: our Canon EOS 7D Mark II digital SLR and our new camera the Canon EOS 5d Mark III

. For those not wanting a heavy camera, try the new Sony A6000 Mirrorless Digital Camera, compact and small but yet DSLR quality pictures. Investing in a quality wide angle lens like the Tokina 11-20mm will enable you to capture some great shots. Plus the wide angle is great for other landscape shots or in big cities to capture large buildings. 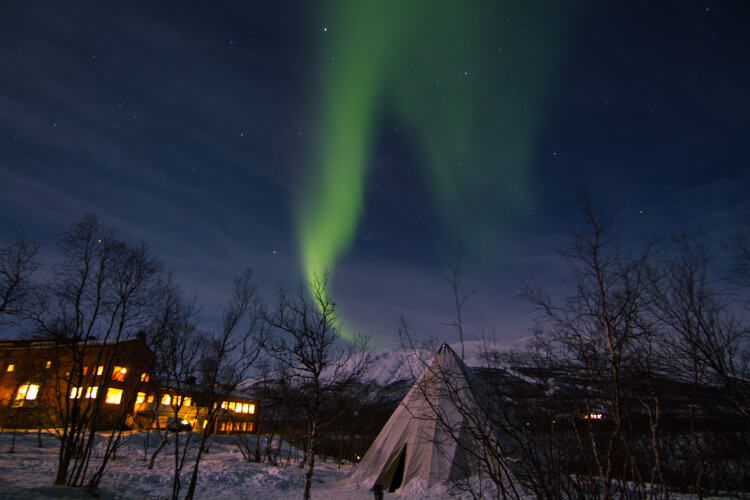 Northern Lights over a Sami lavvu in Abisko, Sweden

5. Keep light pollution to a minimum.

Keep in mind that, especially if you are on a Northern Lights tour, that light sources such as your LCD screen, accidental flash, and even iPhone or other smartphone screens can not only damage your Northern Lights exposure, but also the photographs of others on your tour. Set your camera on the proper settings before heading out on your tour. 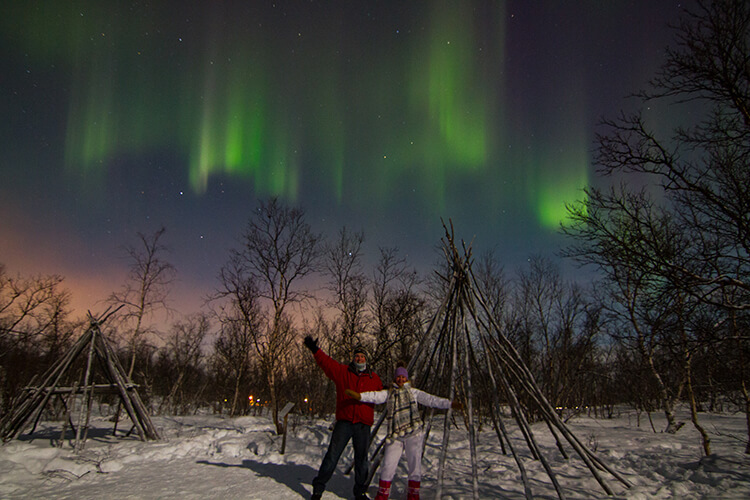 Chasing the Northern Lights in Abisko

6. When possible, include a foreground.

Try photographing Aurora Borealis reflecting on a lake, frame them with trees, or find an interesting subject to photograph them with. Don’t be afraid to experiment with a lot of different compositions! Scout the area around you during the daytime, so when you finish dinner and run outside and see the lights dancing around you know exactly the location you want to set-up in.

How to Photograph Northern Lights with iPhone

When we first started photographing the Northern Lights back in 2011, it wasn’t possible to take a Northern Lights photo with an iPhone. The camera, features and apps for iPhones have come a long way since. And while we don’t personally photograph the Aurora with our iPhones because the photos just won’t ever be of the same quality as those taken with a camera, it is possible to do. The photos will be more grainy and not really good enough for printing, but if you’re only after sharing some with friends then you can use an iPhone.

The camera that comes with iPhone won’t be able to get the job done, much like a point and shoot isn’t sufficient either. You’ll need to download a Northern Lights camera app, like Northern Lights Photo Taker. The app literally does one thing and that’s to mimic the manual settings of a camera and create a long exposure shot so you capture the Northern Lights. It has three presets built in for weak, moderate and strong Northern Lights. You can basically click the app, select a setting and point in the direction of the Northern Lights. There’s also a custom mode so that you can adjust the settings more manually if you want. It still works best if you use an iPhone tripod for all the same reasons we tell you to use a tripod with a camera. But it only costs $0.99, so give it a try if you really want to use your iPhone to photograph Northern Lights.

This article contains affiliate links. When you purchase anything on Amazon