Upon crossing under Mont Blanc through the Mont Blanc Tunnel from France into Italy, you enter the region known as Valle d’Aosta. In 1031-1032 Humbert I of Savoy, the founder of the House of Savoy, received the title Count of Aosta from the Emperor Conrad II of the Franconian line and built himself a commanding fortification at Bard. The region was then divided among strongly fortified castles. Today, 70 castles survived in some form and you will see the panoramas of medieval military architecture on the drive from the Mont Blanc Tunnel into Italy. We stopped at several of the castles along our way. 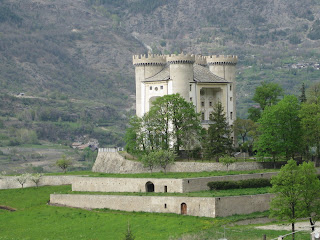 Castello di Aymavilles was built in the 12th century and is characterized by the four cylindrical towers crowned by “murder holes” that enclose a central body with a square base. At the beginning of 18th century, the external fortifications were demolished and the land was arranged in terraces and gardens. 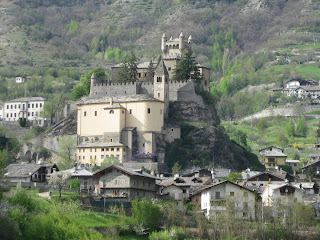 Continuing on the “wine road,” you come to Saint-Pierre, which boasts two castles. Perched on a rocky spur, the Castello di Saint-Pierre predates its first mention in records of 1191, but owes its “fairy tale” appearance to 19th century additions, especially the turrets and machicolations on the main tower. Today, the building houses the Regional Museum of Natural Science. Built in 1420 around a pre-existing donjon, the Sarriod de la Tour Castle was inhabited by the Sarriod family until 1921 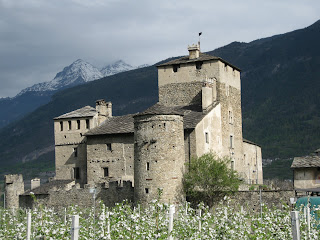 The Castello di Verres is unique and noteworthy as it consists of a large tower, which served as both accommodation and defense. This tower is a cube with all its sides measuring 30m. It stands majestic on a cliff above the river Evançon.

Forte di Bard is located in a narrow gorge next above the Dora Baltea river and was built by the House of Savoy around 1838. It once stopped a 40,000-strong French Army. 400 Austro-Piedmont soldiers held the pass for two weeks completely ruining Napoleon Bonaparte’s plan of making a surprise attack on the Po Valley and Torino. The fort is now open to tourists as the Museum of the Alps and has additional art exhibitions and galleries.