We’ve lived in Italy for a little more than four years now and we still have so much of it to discover. While admittedly we’re a little worn out on just walking around old cities, we’ve turned our focus to much more adventure travel around Italy like exploring Italy’s many caves, camping, and long distance hiking in the Dolomites. So when we spotted a post about the Top 5 Eco Attractions in Northern Italy by our friends at Green Global Travel, we had to check it out. Always suckers for a beautiful waterfall, Cascate del Serio (or the Serio Falls) caught our attention. 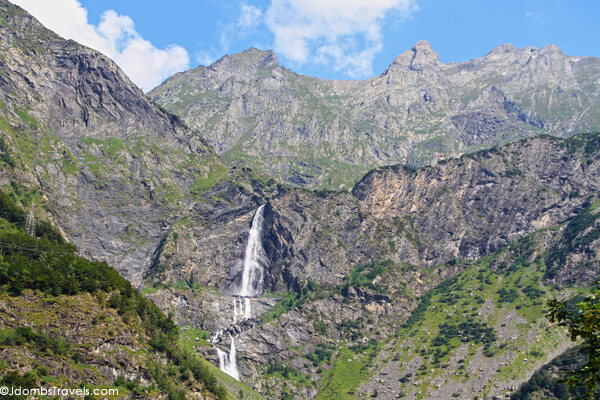 The first mentions of Italy’s highest waterfall was back in the 16th century in travel narratives, like that of Giovanni Maironi da Ponte, who characterized them as “a place to recover from the bitterness of life”. And as with many things in Italy, there is of course a legend associated with Cascate del Serio. As it goes, a woman fell in love with a shepherd who was already engaged to be married. The woman was so jealous that she kidnapped the shepherd’s fiancé and locked her away in a castle above the falls. Cascate del Serio was her tears as she cried for her beloved.

The 315 meter high falls ran down the south side of the Barbellino Plateau. In the early 1900s, the textile industry was flourishing in this part of Italy and a dam was built in 1931 to supply hydroelectric power to the Seriana Valley, cutting off the water supply from the Serio River to the falls. The dam created the Lago del Barbellino, the largest artificial lake in the province of Bergamo. First glimpse of Cascate del Serio from the trail

In 1969, an agreement between the comune of Valbondione and ENEL, the National Electric Energy Corporation, was made that the dam would be released just once each year for the people to enjoy their power and beauty. Today, the dam is released five times each year. The dates of the releases are set in advance and usually take place between June and October. Seeing the thunderous water come crashing down the mountainside as the dam is released involves hiking. The easiest and shortest option is to park in the village of Valbondione. Follow the road through the village following the signs to the trail head for Cascate del Serio. It’s easy to find because so many people come from around Italy to see the falls unleashed. As soon as we hit the trail head, the crowd thinned as everyone hiked at their own pace. There are some little waterfalls along the hike

The trail is about 2 miles one-way to the lookout point directly across from the falls. It is mostly shaded along a dirt path and should take around 1 hour each way.