August, a typically quiet month in Europe, was actually anything but. My email may have mostly remained blissfully slow with the most of the rest of Europe on their holidays, but I was one busy, busy bee. Overall, it was a super productive month with a lot of work finally getting the attention I just never seem to have the time to give to it. I may not have lengthened my list of the 365 bottles that this Bordeaux in 365 Bottles series is name for, but I sure shorted up my to do lists.

And that felt amazing and incredibly motivating.

When I wasn’t slaving away improving Luxe Adventure Traveler, I was running all over Bordeaux climbing towers, touring ancient Roman ruins and playing tourist in my own city. And I fit in a few trips to the beach, including a lovely weekend spent with friends at their family beach home in Lacanau. Ice cream dates for two at my favorite pâtisserie

We’re still making this living in different countries thing work. Although, it’s significantly better and easier with one of us in England and one of us in France than it was with Tim in South Korea and me in France.

Tim drove down to Bordeaux at the end of August to bring some of our stuff from our storage. I’m very excited to have my bicycle and my All-Clad pots and pans back.

He also picked me and Emma up, and we’ll spend a few weeks with him in England. It’s nice to have our little family back together again. 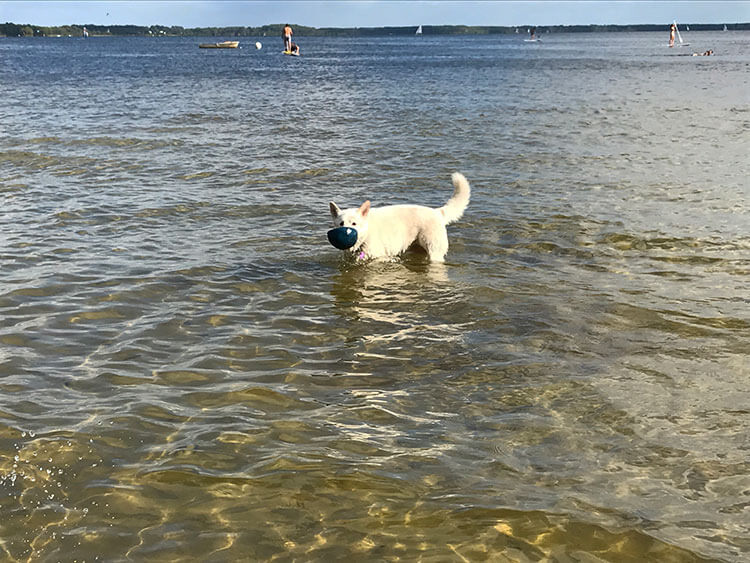 Emma having fun swimming in Lacanau

Emma’s liver enzyme levels are off the charts

Emma was due for another check-up anyway, and to come to England she had to get a tape worm treatment, along with her vet’s sign off that she was in good health to travel.

Whew, huge sigh of relief to that!

She’s not been having any symptoms, so for now her vet feels that we just need to get Emma on a higher quality diet. We’ve had to switch her food to one rich in proteins and better suited for her needs.

We’d already cut out pretty much all the human food Emma loves to eat about a year ago when she first got diagnosed with liver cancer, but I can’t say no constantly to those puppy dog eyes. I’d still give her a bit of cheese or a tiny bite of this and that on occasion.

But while we focus on getting her liver enzyme levels under control, we just have to be much more strict. Thankfully, Emma loves raw veggies and we can give those to her as a treat. She really loves cauliflower!

Remember last month when I wrote about both me and Tim having to re-take the written driving test to renew our driver’s licenses? Well, little did I know that I would be thrown in to an ongoing nightmare that would leave me with a temporary paper driver’s license that the Illinois Secretary of State Jessie White’s office insists is a valid driver’s license, but the rest of the world – including TSA in the United States – says is not sufficient.

The short story is that in the security upgrades to make Illinois driver’s licenses compliant with the Department of Homeland Security, the hand forgot to tell the foot about how to handle special people like us who are expats and don’t actually live in the US anymore. So our new driver’s licenses, which now have to be mailed per the new security standards, were destroyed since they couldn’t be mailed to us.

I’ve spent no less than 30 hours calling, waiting on hold and being transferred around to various departments. I finally got to a supervisor who had us fax – yes, that’s right. It’s 2017 and I had to FAX – documents to her to prove our status overseas and the driver’s licenses were processed and mailed out to our foreign address at the beginning of August.

Tim received his. Mine, however, is lost somewhere in the postal service perhaps never to be seen or heard from again.

After more hours phone calls, the lovely Illinois DMV has told me tough cookies and that my only solution is to fly back to Chicago and appear in person. But, they still mail the driver’s license!

I’m not settling for the fact that this is the only solution. I’m not going to spend over $1000 for a flight and hotel just to appear in person, only to probably repeat this nightmare since I still have a foreign address.

They’ve also made me miss the deadline for exchanging my Illinois driver’s license for a French one. I now get the pleasure of shelling out about €2000 and devoting no less than 8 weeks of my life to going to driving school. Did I mention it’s in French?

I spent the better part of August completely overhauling all of our Iceland content, as well as doing a major clean-up on Luxe Adventure Traveler. I’ve already deleted over 100 old posts and combined a lot of the content into our guide style articles that actually help you plan and repeat the trips that we do.

I’m no where near done. I’ve got a long list of content I’m improving, but Iceland is more or less done now. I’m super proud of it, so go take a look at our shiny new Guide to Iceland landing page and let us know what you think!

We also also have a Guide to Bordeaux.

In between being buried under lists and strategy notes, I did manage to write about my trip to Toulouse. And is it ever an underrated city!

Toulouse is one of those places that you definitely go for a city break, because it’s two hours to anywhere else in any given direction. But that’s okay, because Toulouse is young, vibrant and has tons to see and do.

The Perfect 3-Day Weekend in Toulouse

We were excited when we saw we’d be dining at @n5winebar, which was recently named as the World’s Best Wine Bar 2017 and Europe’s Best Wine Bar 2016 by @worldoffinewine, on our trip to Toulouse. And this turned out to be our favorite meal of the trip! Each night owner and chef Thomas prepares a surprise tasting menu. The meal is small plates of tapas that seem to just keep on coming. There are over 300 wines you can order by the glass, 10,000 bottles to choose from or you can opt for a card and taste a variety of wines. The card works like a credit card and there are a number of enomatic machines that dispense wine by the glass and pour size. We’ve never, ever seen such an extensive wine list anywhere before. It became quickly clear between Thomas’ passion for wine and his artful tapas just why N5 Wine Bar has such an extensive list of awards including from @wine_spectator and @vinexpo. Do NOT miss this spot when visiting France!

A post shared by Luxe Adventure Traveler (@luxeadventuretrvlr) on Aug 2, 2017 at 1:18pm PDT

I’ve been on somewhat of an Instagram strike lately. I’ve written before about being disillusioned with the state of Instagram. So many people game the system and have a bunch of fake likes and “engagement” that it makes it impossible for people like us that are just trying to have a voice in the crowd and grow authentically.

As much as I’d just like to throw in the towel on Instagram right now, I thoroughly enjoy doing Instagram Stories when I have something interesting to share. And sharing photos on Instagram is part of the package of social media we offer to the brands we work with. Cocktails and ciders were mainly the name of the game in August: margaritas with friends at a new Mexican, luxe cocktails with our friends and dim sum at Madame Pang and gin and tonics at the beach.

And when I’m in Britain, I love indulging in ciders and perrys!

We did unpack our wine collect, which spent the last year carefully packed up in a storage facility. We’re so not moving the majority of the more than 200 bottles again. That combined with the memories of trips, like when we went to Rovinj, Croatia and came home with a case of Vina Matošević Grimalda Red that we loved, had us opening up and decanting a bottle to have with dinner. Coming Up in September 2017

If you follow us on social media, then you already know me and Tim started off September on a trip with Emma to Snowdonia National Park in Wales. We spent the long weekend discovering Welsh food, castles and wildlife. We’ll be writing about it for our The Perfect 3-Day Weekend in… series.

This week I’m off to the San Juan Islands, which are some islands between Seattle and Vancouver and known for their natural beauty. I’ll be discovering the food, wine and wildlife there for a full week.

And speaking of Iceland, I just can’t stay away from my favorite country for too long. I’ll be back there for a 5-day Icelandair Stopover and to add a bunch of new adventurous activities like snowmobiling on a glacier, kayaking in a glacier lagoon and sleeping in a bubble {hopefully} under the Northern Lights.

I’ll pop back to the UK briefly, where Tim is living now, before heading home to dump my suitcase out and repack for a trip to Biarritz and French Basque Country with Tourisme Pays Basque. This trip was supposed to happen in the spring and is part of my ongoing collaboration to introduce y’all to the region I live in, Nouvelle Aquitaine.