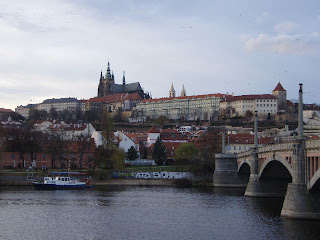 Prague is the capital of the Czech Republic and situated on the River Vltava in central Bohemia. We were first off to Prague Castle, which according to the Guinness Book of World Records, is the largest coherent castle complex in the world, with an area of almost 70,000 m². Castle Guards stand in British fashion at the Castle gates and changing of the Guard takes place every hour. 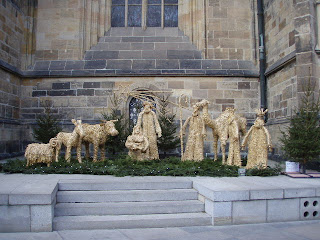 Located within the walls of Prague Castle, the mighty Gothic St. Vitus Cathedral seems to rise up above you and dominates the skyline from the city below. It contains the tombs of many Bohemian kings, most notable Charles IV, who became the Holy Roman Emperor in 1355. Inside the Cathedral, a small door with seven locks, in the south-western corner of the Chapel of St. Wenceslas, leads to the Crown Chamber containing the Bohemian Coronation Jewels.
A life-size Nativity made out of straw stands at the side of the Cathedral and a grand Christmas tree rises tall in the courtyard at the rear of the Cathedral. 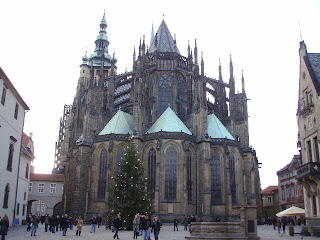 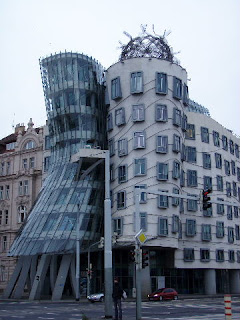 From Prague Castle, we made our way across the Charles Bridge toward Old Town. The Dancing House, the nickname for the Nationale-Nederladen building, in downtown Prague was built in 1996. It was originally named Fred and Ginger for Fred Astaire and Ginger Rodgers because the house vaguely resembles a pair of dancers. Its contemporary design certainly does stand out against the Baroque and Gothic styles of Prague. 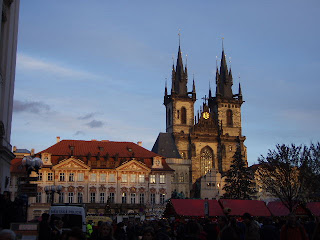 In the Old Town Square, a bustling Christmas market was framed by the Tyn Cathedral and St. Nicholas Church. Here we sampled Czech sausages and ham from the market fare as the daylight faded and the Christmas lights illuminated the Square. The famed Prague Astronomical Clock is also in the Square. The Orloj is composed of three main components: the astronomical dial, representing the position of the Sun and Moon in the sky and displaying various astronomical details; “The Walk of the Apostles”, a clockwork hourly show of figures of the Apostles and other moving sculptures; and a calendar dial with medallions representing the months.
After wandering around the city, we stopped for dinner at Staromacek near the Old Town Sqaure. I warmed myself up with a hot mulled wine and had Kralovake biftecky, which was a Bohemian specialty of beef steaks with cream, cranberries, mushrooms, and ham. The cream was actually a sweet cream, like a whipped cream that topped everything. It was served with croquettes, or mashed potatoes rolled into a ball and deep fried. Tim had the pot roast prepared with beer.  I would never have thought to put whipped cream on a beef steak, but it was absolutely delicious! 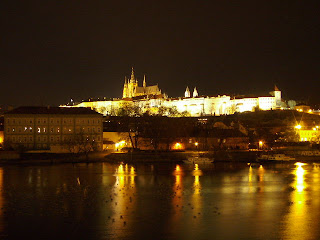 After dinner, we strolled along the Vltava, admiring the views of the Prague Castle lit up on the hill. Also off in the distance was a tower which appeared to look like the Eiffel Tower. We were on a mission to find it! We drove all around trying to get close, finally realizing that you cannot drive up to the tower. We finally found that you can go up by the Petrin funicular, a tram-railway opened in 1891 that takes you up the hill. The funicular has three stops: Újezd (at the bottom of the hill), Nebozízek (the middle station), and Petřín (at the top of the hill).
The Petrinska Rozhledna, built in 1891, is a 60 metre high steel framework tower, which strongly resembles the Eiffel Tower in Paris. Although it is much shorter than the Eiffel Tower, it stands atop a sizable hill, Petrin, so the top is actually at a higher altitude than that of the Eiffel Tower. 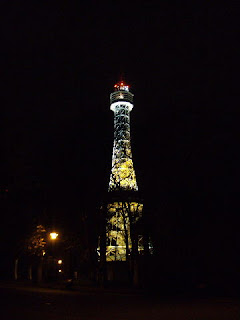 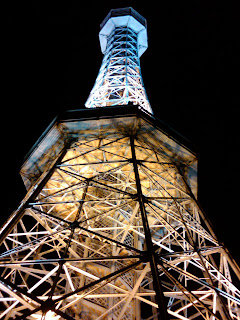