If someone would have told me 18 years ago that I’d be living in Europe and a business owner, I’d have laughed. I didn’t really have a clue what I wanted to do with my life and it changed pretty much monthly from everything from lawyer to marine biologist. At one point, I really started to love cooking and even looked in to studying to be a professional chef.

Even nine years ago when I started this blog, I only started it as some lame personal blog that I was certain all our family and friends would read because we were the only ones anyone knew that actually moved overseas. Here’s a fun fact: it was originally named “Living in Italy”. Thankfully I realized really early on that just writing about being an American living in Italy wasn’t a good idea and really wasn’t all that interesting after we initially found our house and moved in. Not to mention that we never planned to stay in Italy forever.

But nine years ago I had no idea that there were already professional bloggers or that people actually made a living from websites like this.

Two years ago when I came to Bordeaux, that was also supposed to have an expiration date. Instead, I found the first place in my entire adult life that truly felt like home. It’s the place where my personal life and my professional life finally fit perfectly together, and the positivity from feeling balanced just motivates me continually forward. 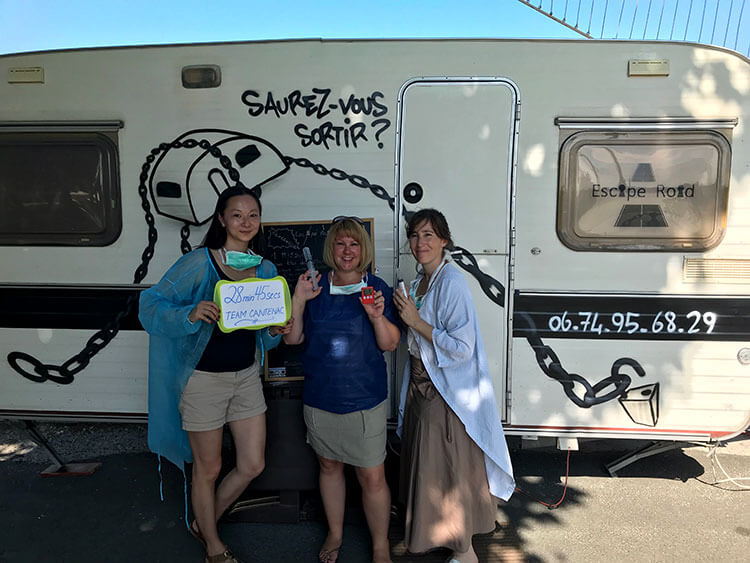 It was the girls vs. guys to see who could escape fastest from the mobile Escape Road game at Bordeaux Food Truck Festival

I was awarded my French residency renewal

It’s always nerve racking while I wait around after my residency renewal appointment. You just never know, no matter how well the appointment seemed to go. I literally check my mailbox like a kid on Christmas morning every day between the appointment and when the letter finally arrives. So it feels like a champagne-popping occasion when you tear it open and you’ve been awarded your renewal.

Believe you me, I headed straight on over to the Prefecture to pick up my shiny new carte de sejour as soon as possible. And for a whole 10 months, I get to put all the paperwork away and {mostly} enjoy being a resident of France.

The media mentions keep pouring in

Running your own small business often means you become a jack of all trades. I’m a writer/photographer/social media manager/marketer/…the list goes on and on. I’m also our own public relations manager and I’ve been working overtime to get the media mentions. Most of the time I’m out there shouting as loud as I can in a pretty big crowd of other travel bloggers also shouting at the top of their lungs to catch the attention of some publication’s writer or editor for the hope of being quoted. And a teeny, tiny minuscule that isn’t even 0.01% of the time a email lands in our inbox requesting an interview or a quote.

When Forbes listed and quoted us as expert luxury travel bloggers recently, it was occasion to jump for joy. And as a high school friend pointed out when I shared the Forbes article on Facebook, Forbes is like the Mecca of media mentions.

Reader’s Digest also mentioned two of our packing tips in a great article on packing tips for your next trip. 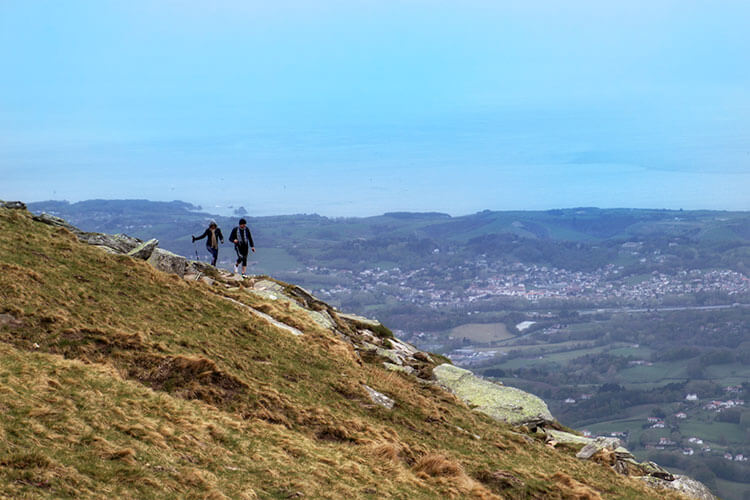 Head in to the hinterland to experience the traditional Basque culture

I finally published my guide to the Pays Basque hinterland just in time to head back for my second trip. And it definitely won’t be my last!

I love this part of France and there’s still so much Tim and I have yet to discover. From hiking to white water rafting, the Pays Basque is an outdoor lover’s dream. Combine that with the delicious Spanish influenced food and fabulous boutique hotels, and it’s like the Pays Basque was made for us.

Every other June the city of Bordeaux celebrates its wine heritage with Bordeaux Fête le Vin. It was my second and Bordeaux’s 20th, and Bordeaux really did it up with this anniversary milestone pairing the wine festival with a tall ships regatta.

My mom was visiting and we went all four days, which is really how long it takes to make your way through all 2 kilometers that the festival stretches along the quay. There’s fireworks all four nights, and we watched one night from the roof terrace of the Nouvelle Aquitaine stand and from aboard the Etoile du Roy tall ship with a deck party on the final night.

Now that I’ve been through the festival twice, I’ll be putting together a guide to making the most of Bordeaux Fête le Vin. Who’s ready to start planning for 2020?

Between Bordeaux Fête le Vin and summer being my favorite time to visit Bordeaux’s many châteaux, what didn’t I drink?

I met up with friends at Château de la Dauphine for the first edition of the Bordeaux Food Truck Festival and share a bottle or three of rosé to start the month. Then after a little too much wine and fun, my friends brunched for the very reason the Brits invented it – to wake up late and take the edge off the too-much-wine haziness from the night before at Château Ambe Tour Pourret’s monthly brunch. One glass of their delicious Crémant was just the right amount.

My mom arrived for her 2-week stay a few days later and we immediately headed down to Biarritz and the Pays Basque, where sangria was the name of the game. We also spent the night near Saint-Émilion sleeping in a wine barrel and sipping on Château de Bonhoste. Our visit in Saint-Émilion was capped off with a tuk-tuk tour of the tunnels beneath the town where Crémant de Bordeaux is riddled and aged.

From Saint-Émilion, we spent some time in Bordeaux’s sweet wine appellation: Sauternes. Proving wine tasting in Bordeaux isn’t always a stuffy affair, we earned our Château de Rayne Vigneau tastings by solving their Sweet Escape game with just a few minutes to spare.

Back home in Bordeaux, we put our tasting passes for Bordeaux Fête le Vin to work tasting at the 12 stands across the festival. We also got a special introduction to Armagnac at a press event during the festival, which is a bit like Cognac but lesser known outside of France.

When I took my mom up to Paris for her flight home, I took advantage of heading north to go on a little jaunt to Champagne and learn more about bubbly. Between visits to Janisson-Baradon, a small family-run producer, and Moët & Chandon, I was high on a champagne cloud by the time I boarded my train back home to Bordeaux that night.

Then I jetted off to Ibiza for a quick trip aboard a yacht charter, where I tried the local Ibizan spirits and wine on a walking food tour in Ibiza Town.

Life is good – and wine-filled – when many of your friends own their family-run château. I ended month hopping back and forth from the Left to Right Banks and back again at Château Cantenac and the second edition of the Bordeaux Food Truck Festival at Château Maucaillou. 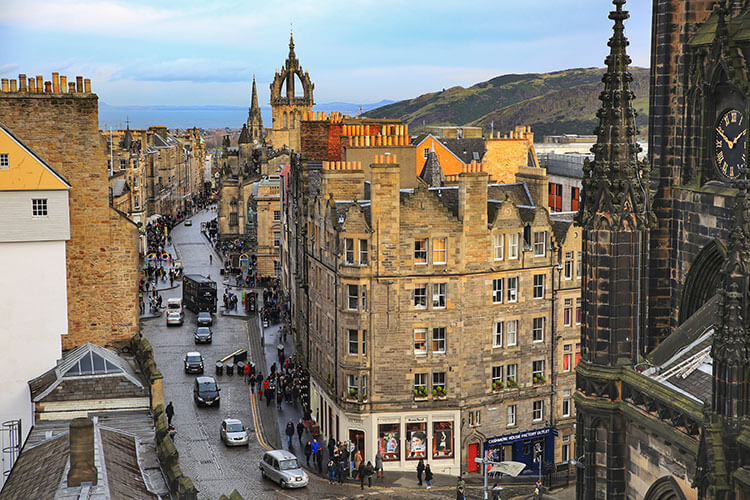 I’m a busy bee fluttering about this month. First, I’m off to my neighboring region Occitanie for the Lot of Saveurs gastronomy festival. The festival is celebrating its’ 10th year of the delicacies and products of the Lot-en-Garonne. I can’t wait to discover the infamous Black Wine, visit the walnut mills and eat all the delicious things from the South West of France.

Then I’m off to Norway, Scotland and England on a 2-week long Into the Midnight Sun cruise with Viking Ocean. If you’ve been following us, then you might remember that it was just over three years ago that I first came to Bordeaux with Viking River Cruises. It was that trip where I fell in love with Bordeaux, and I’ve always credited Viking with a big role in that life changing trip.

I don’t have any intention of moving to Norway, but I’m excited to join about a dozen of my fellow blogger colleagues on the trip and finally see Norway in the summertime. Tim and I have been to Norway several times, but always in the dead of winter. I’ll even visit Tromsø again, where I truly witnessed my first Northern Lights.

We’ll begin in Bergen and make our way all the way up to the North Cape where I’m signed up to do some king crab fishing. As we sail south again, we’ll visit the Lofoten Islands before sailing on to Scotland’s Shetland and Orkney Islands. We’ll port in Edinburgh before reaching our final port in London 15 days later. I’ve booked two different kayaking excursions through the ship in Geirangerfjord and Moldefjord, the king crab safari in Honningsvåg, and a coastal hike in the Orkney Islands. But if you’ve got any tips for me for my ports, send them my way!